1. Functional morphology of the endocrine system

Functional morphology of the endocrine system 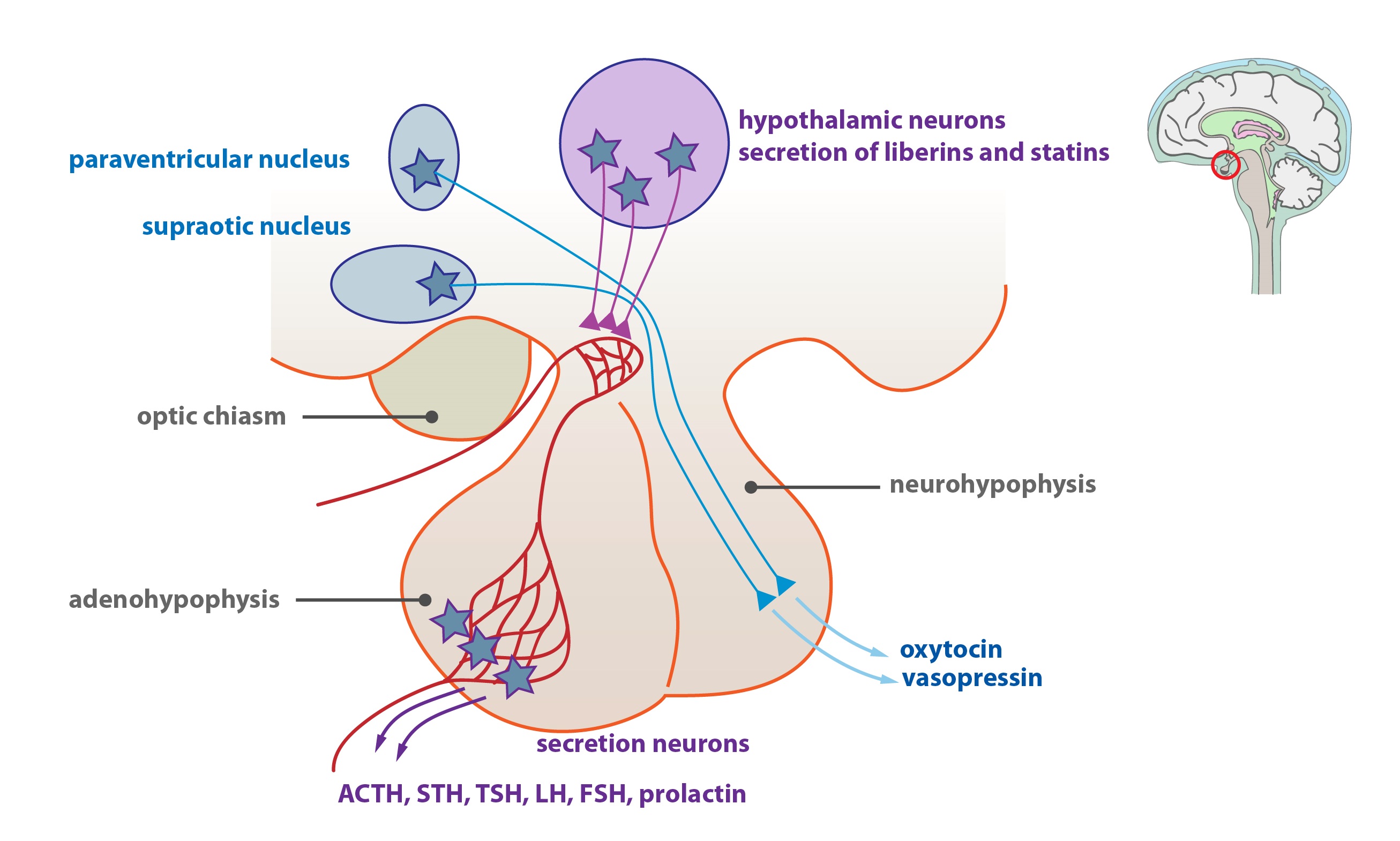 The anterior lobe is divided into pars dorsalis, pars intermedia and pars tuberalis. The pars distalis contains a blood capillary network, chromaffin cells and chromophobe cells. Two types of chromaffin cells can be distinguished – the acidophil cells are stained with eosin and they secrete low molecular weight proteins, and the basophil cells which are stained with hematoxylin and produce glycoproteins. 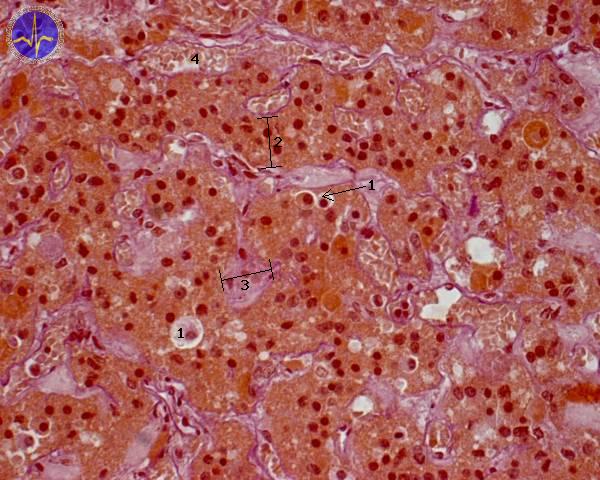 The posterior lobe contains unmyelinated axons of neurosecretory neurons, pituicytes and fenestrated capillaries. Bodies of the neurosecretory neurons are located in the hypothalamus – specifically in supraoptic nuclei (production of vasopressin which affects collecting ducts in kidneys) and paraventricular nuclei (production of oxytocin stimulating uterine contractions) of the hypothalamus.

The pineal gland is located on the roof of diencephalon. Its surface is covered by capsule which continues to the pia mater. The pineal gland contains pinealocytes producing melatonin and astrocytes. The pineal secretory activity fluctuate during day depending on circadian changes of darkness and light.

The thyroid gland is composed of two lobes connected by an isthmus. A thin connective tissue capsule surrounds the gland and sends septa extending into the glandular parenchyma. The gland contains follicular cells arranged into the follicles filled with colloid and parafollicular cells containing hormone calcitonin which decreases the blood level of calcium ions. 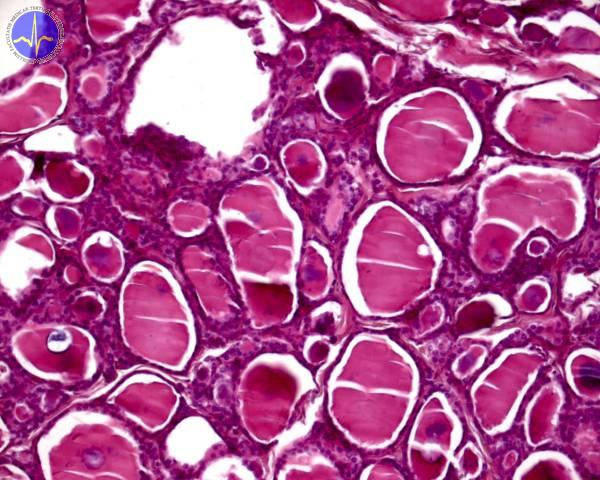 The adrenal glands are organized into two distinct regions – the cortex and the medulla. The cortex contains cells with characteristics typical of steroid-secreting cells which store their secretory products in secretory granules. The cells are arranged into the cellular cords surrounded by sinusoids. They have centrally located spherical nuclei, highly developed sER, mitochondria with tubular cristae and lipid droplets within the cytoplasm. The adrenal cortex is divided into three zones: zona glomerulosa located under the connective tissue capsule – produces aldosterone which affects the absorption of natrium ions in the distal tubules of kidneys. The second zone is zona fasciculata producing glucocorticoids (cortisol) and small amount of androgens. The third zone is called zona reticularis composed of cells with lipofuscin in the cytoplasm. These cells secrete glucocorticoids and androgens. 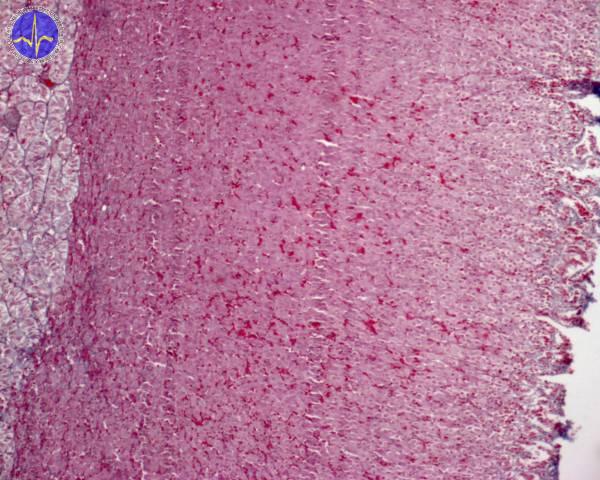 The endocrine pancreas consists of islets of Langerhans. These islets are formed by spherical cells arranged into cellular cords surrounded by network of fenestrated capillaries. Islets contain a few types of cells:

1) Beta cells –most numerous, generally located in the central portion of the islet, they secrete insulin 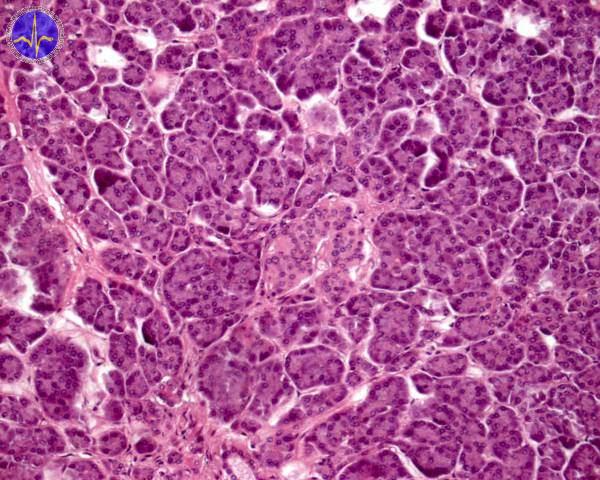 The islet is in the middle of the picture. The rest of foto is covered by exocrine acini. 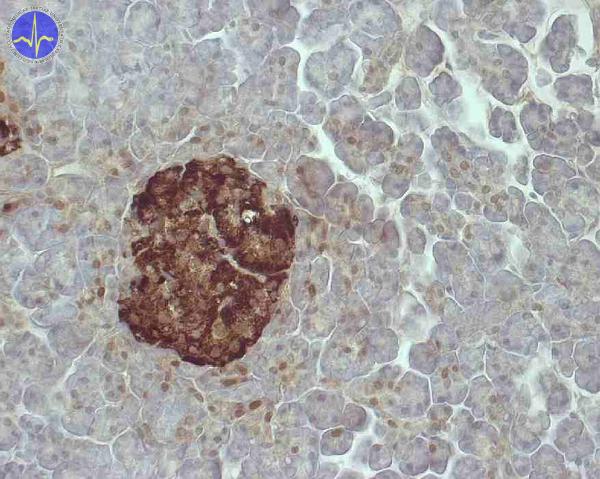