Stress is currently a hotly debated topic especially because of its role in the development of civilization diseases. However it is difficult to define the term stress and a precise definition has not been implemented yet.

The stress response is triggered by potentially dangerous or noxious stimuli that violate homeostasis. These incentives are generally called stressors. They have both endogenous and exogenous origins. It is therefore a comprehensive set of stimuli, which can include anything from an ordinary wound to fever, starvation, changing external environment or fear of changes in the social structure of the group. Common to the various stressors is that they always activate stress axes.

Until recently, scientists believed that stress is a nonspecific reaction per se. This means that different stressors always induce initiation of the same general adaptation mechanisms. This theory is now rejected by most professionals because it was found that specific stressors activate specific combination of adaptation mechanisms. While experiencing fear we initiate other adaptation responses than in injury etc.

Despite the rather specific response to the stressor certain general patterns and sequences in organism response can be observed. This sequence of reactions is called the general adaptation syndrome (GAS), in which we differentiate three phases: 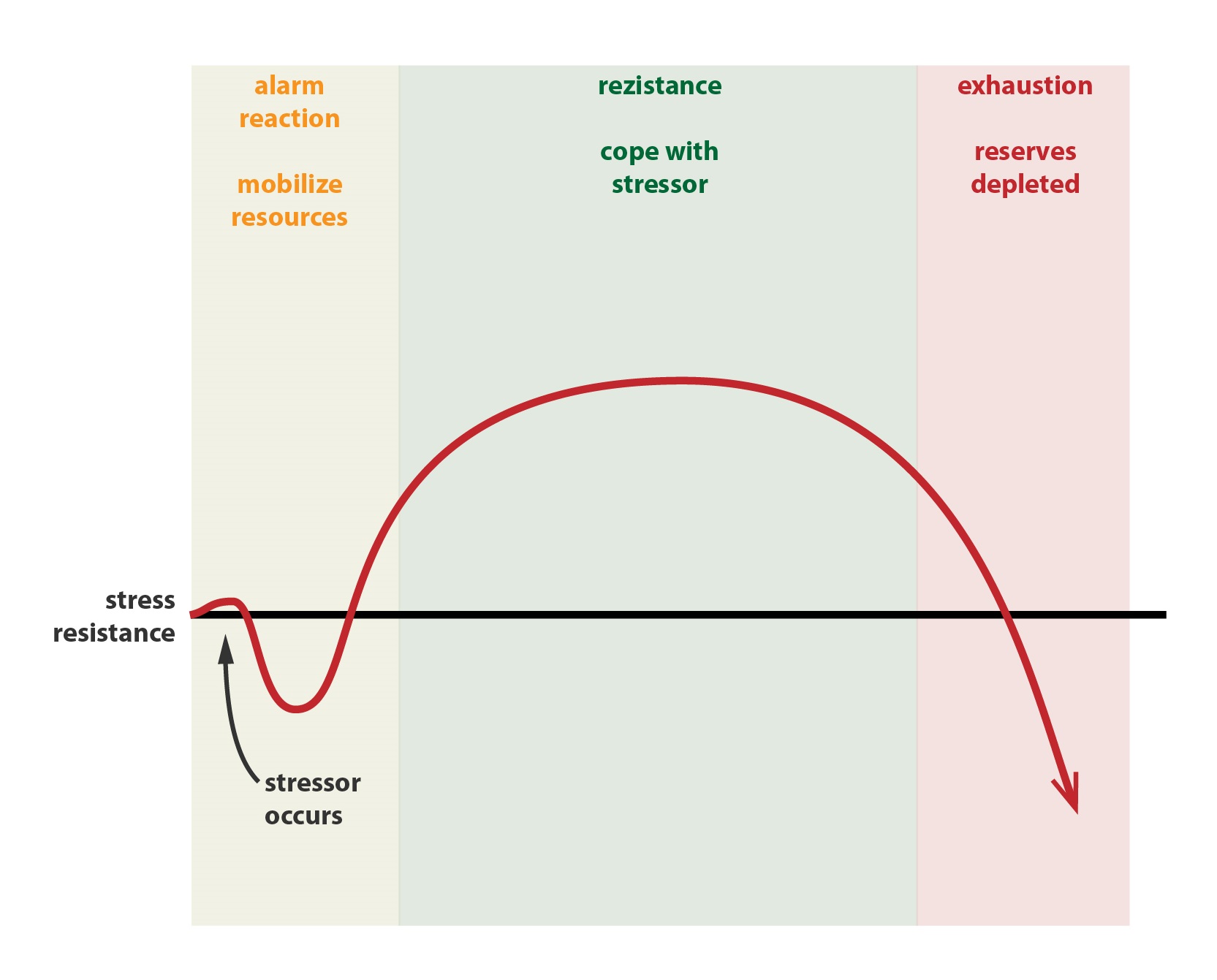 This is an immediate response to the stressor. It is mediated by catecholamines, both from the sympathetic portion of the autonomic nervous system (noradrenaline) and from the adrenal medulla (epinephrine) – endocrine signal.

A typical result is the activation of the “fight or flight” response.

At this stage, the body activates the mechanisms for eliminating the stressor or for minimizing its harmful effects. It is mediated by glucocorticoids from the adrenal cortex (ADH and the renin-angiotensin-aldosterone system are activated also). It is both a volume protective reaction that maintains the volume of body fluids, the blood pressure and particularly the energy reserves for the vital organs.

If the stressor still affects the organism after the alarm and resistance phases, then we can no longer speak of eustress. At this point, the stress itself (the reaction of the organism) becomes harmful and is described as distress. The body is no longer able to prevent further exposure to the stressor and adaptation mechanisms themselves become harmful.

The stress response is a complex of non-specific hormonal, neuronal and behavioral responses that are designed to protect the individual from exposure to the stressor. Thus they mediate the alarm and resistance phases of GAS. It is interesting that they are evolutionarily very conservative reactions, which in most vertebrates takes effect uniformly.

The stressor activates two discrete physiological mechanisms of the so-called stress axis are the:

SAM, which is controlled by the sympathetic portion of the autonomic nervous system, stimulates the production of catecholamines in the adrenal medulla. Since it is primarily mediated by neuronal guidance of information, the effect can be observed very early (in seconds) after the registration of the stressor .

Noradrenaline secreted from the varicosities of the sympathetic fibers causes vasoconstriction in the periphery via α -receptor  and in the gastrointestinal tract, thereby increasing blood pressure.

SAM axis activation also causes metabolic changes that increase the availability of energy to vital organs.It also activates glycogenolysis in the liver and increases the content of free fatty acids and lactate levels. There is also an increase in the level of metabolic turnover which mediates the calorigenic effect of catecholamines.

1) The hypothalamus is stimulated by excessive activity of the sympathetic portion of the autonomic system in the activation of SAM. In this case, the actions of the HPA axis directly follows the initiation of the SAM axis.

2) Information from sensory inputs (sensory cortex) are transferred to the hypothalamus and it declares them as the stressor. Thus the HPA axis can be activated only on the basis of sensory pathways, without prior activation of the SAM.

Corticotropin releasing hormone is secreted into the capillaries of the pituitary infundibulum. Blood flow in the pituitary portal circulation washes cells of the anterior lobe, therefore corticoliberin can stimulate subpopulation of corticotrophs of adenohypophysis, resulting in increased secretion of adrenocorticotropic hormone (ACTH). The ACTH is carried by the blood stream to the adrenal cortex, which significantly increases secretion of glucocorticoids, which mediate the main effect of adaptation: reserving energy substrates to vital organs. Among other things, glucocorticoids mobilize energy themselves, slow digestion, inhibit reproductive functions and suppress the immune response.

From this description it is clear that due to its character the HPA axis slower onset of the effects, on the other hand, exhibits a long-term effect.

Due to the potential harmful effects of the HPA, the hypothalamic axis is strictly regulated. Glucocorticoids bind to their receptors in the CNS and the hypothalamus is constantly informed of their plasma concentration. In excessive concentrations the HPA axis is disabled. This is a negative feedback.

The influence of the stress response to carbohydrate metabolism

The stress response significantly affects the metabolism of carbohydrates, which is clinically the most important, and therefore we will look into it in more detail. This influence varies in acute physiological stress (eustress) and chronic distress.

Glucocorticoids increase glucagon levels in the blood, which naturally leads to an increase in glycemia. Blood flow to vital organs is increased concurrently with increases in heart rate and blood pressure, therefore glucose can be very efficiently transported to the target organs. Due to the ability of glucocorticoids to induce peripheral insulin resistance, the majority of glucose is reserved for the brain. This improves cognitive functions in a stressed individual.

In long-term peripheral insulin resistance the insular tissue of the pancreas starts to produce more insulin. These signals also trigger hunger centers in the hypothalamus and the individual begins to seek more high-calorie diet. Excess energy is then stored as fats. In the long run distress associated with changes in eating habits leads to a further increases in insulin resistance until it resolves in a disease condition called steroid diabetes.

Response to the stressor even varies between two individuals of the same species. This interindividual variability occurs primarily due to inconstancy in temperaments and personalities of the individuals.

Extroverted individuals prone to impulsive behavior are influenced primarily by the SAM axis and to the majority of stressors react correspondingly to “fight or flight”. On the contrary, naturally calm personalities are more influenced by the HPA axis so quick SAM reactions are marginal. This behavioral correlate of the modulation of the stress response is called a “freeze or hide” response.

Notably straightforward is this difference evident in wild animals. While predators typically respond with increased activity in the SAM axis, herbivores predominantly experience activity in the HPA axis. An example of a response in the HPA axis is when a deer is suddenly dazed by the headlights of a car and freezes.

The stress response is significantly reduced if the stressor is anticipated.