3. Hormones of the parathyroid gland

Thyroid gland is one of the largest endocrine glands in the human body. The main hormones it produces are called triiodothyronine and thyroxine. They affect almost every cell in our body and regulate its metabolic activity. Hypersecretion of these hormones can increase the metabolic turnover up to two times and hyposecretion, on the other hand, can lead to about 50 % decrease in the metabolic activity of our body. Another hormone produced by thyroid gland is calcitonin. Calcitonin does not affect the metabolic turnover, but interferes with the metabolism of calcium (and phosphate) ions, which are responsible (among other functions) for the stability of membrane potential. The slightest changes in its metabolism may therefore have substantial implications.

Taking into consideration that thyroid disorders are among the most common endocrine pathologies in internal medicine, we must pay necessary attention to this issue.

Thyroid cells produce triiodothyronine (T3), thyroxine (T4) and calcitonin as well. In this chapter, we mainly discuss the role of triiodothyronine and thyroxine. Calcitonin, whose importance in human metabolism is likely quite limited, is mentioned at the end of the chapter.

Structure of triiodothyronine a thyroxine

The structure of thyroid hormones is unique due to the presence of iodine in their molecules – they belong to iodinated derivatives of the amino acid tyrosine. T3 (3,5,3’-triiodothyronine) contains three and T4 (3,5,3’,5’-tetraiodothyronine or thyroxine) four iodine atoms.

Apart form T3 a T4, the blood contains a small amount of so-called reverse T3 (rT3 or 3,3’,5’-triiodothyronine) as well. It arises from a metabolic conversion of T4 and unlike T3 (portion of which comes from T4 as well) is metabolically inactive.

Synthesis of triiodothyronine a thyroxine

Precursor of thyroid hormones is a large, iodised and glycosylated molecule of protein called thyroglobulin, which is made up of more than 100 tyrosine remnants. Most of the molecule consists of inactive precursors – MIT (monoiodotyrosine) and DIT (diiodotyrosine) and smaller part of iodothyronyl remnants – T3 and T4. Synthesis of T3 and T4 can be divided into several steps:

Synthesis of thyroglobulin takes place on rER and GA in the follicular cells. Thyroglobulin is than transported into the lumen of follicle, where it becomes a part of so-called colloid.

2) Iodide uptake and its transport to colloid

The uptake of iodine from the blood is mediated by the thyroid iodine pump (Na+/I– symporter). The pump operates on the principle of a secondary active transport, using the concentration gradient of Na+ (created by (Na+/K+– ATPase) to transport the I– against its concentration gradient. The whole process is primarily regulated by TSH synthesized in anterior pituitary. 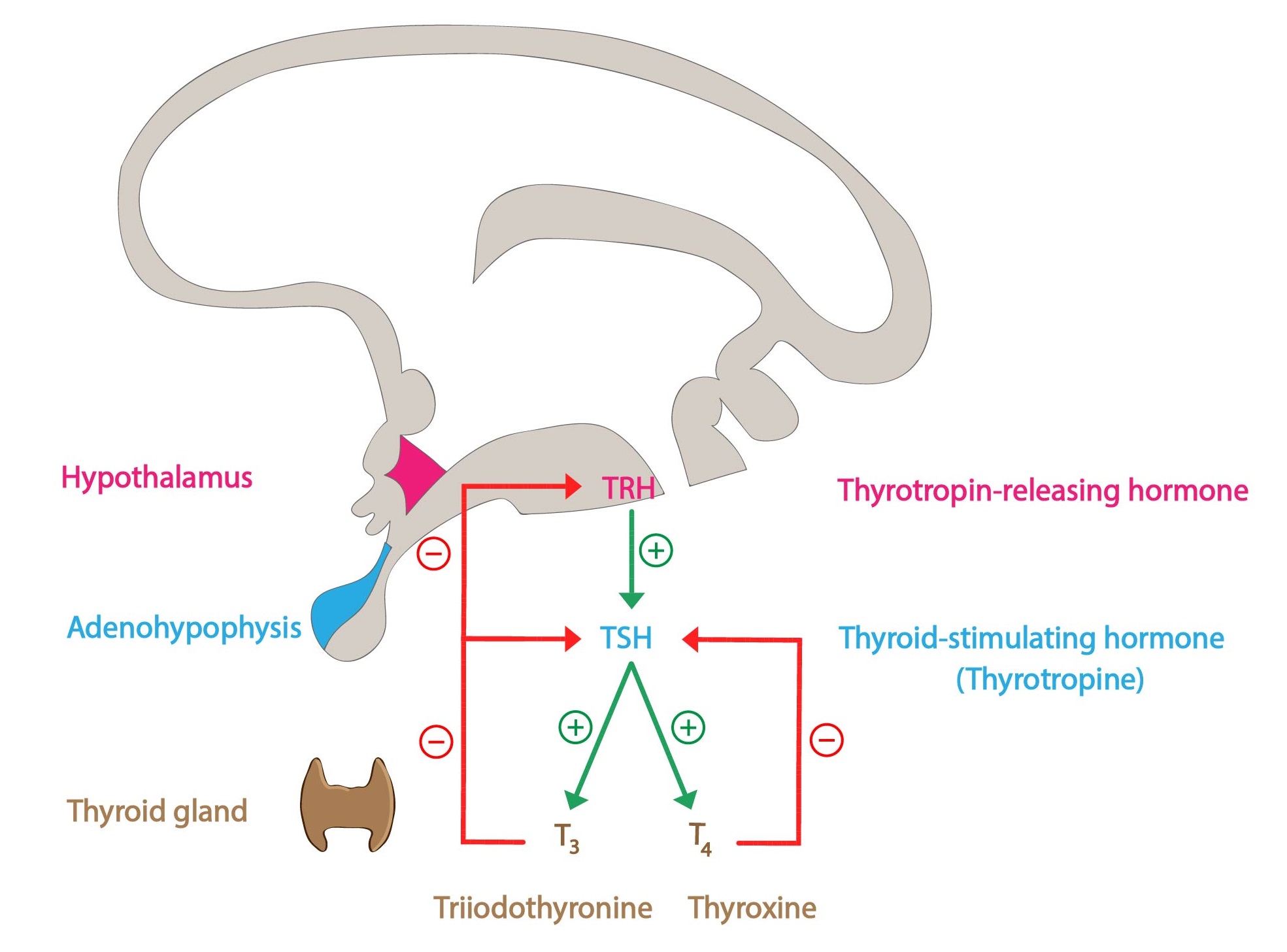 The activity of the pump is reflected by so-called T:S ratio (the ratio of iodides in thyroid cells to serum iodides). Eating regular diet leads to T:S ratio of about 20:1. Transport of cytosolic iodides into the colloid is mediated by a transporter called pendrin.

Next step is the oxidation of iodide I– by an enzyme thyroid peroxidase, forming molecular iodine I2. The enzyme contains heme and requires H2O2 (its production uses NADPH). Oxidation takes place near luminal membrane of the thyreocytes, at the entry point of iodide into the colloid.

4) Organification of iodine (iodination of tyrosine)

The resulting iodine molecules are attached to the tyrosyl residues of tyroglobuline in the process of iodination of tyrosine (organification). Thyroid peroxidase is probably also involved in this process. As a result, MIT and subsequently DIT are formed.

A group of substances known as thyroid peroxidase inhibitors prevents the oxidation of iodine and thus stops the synthesis of thyroid hormones. Among the most well known are the derivatives of thiourea like propylthiouracil or methimazole (and its inactive precursor molecule carbimazole). They are used in the therapy of thyroid gland hyperfunction to decrease the concentrations of hormones. While their effect on biosynthesis is instant, clinically it only becomes apparent after a certain latency (in order of weeks). It is due to the existence of relatively large quantities of hormones stored in colloid or bound to the transport proteins.

T3 and T4 are formed by the condensation. By joining two molecules of DIT a T4 is formed and joining one molecule of DIT with one molecule of MIT creates T3. Under usual conditions, when the intake of iodine is sufficient the ratio of synthesized T4: T3 is approximately 6:1. Newly synthesized hormones remain part of the thyroglobulin and represent a supply for several weeks (up to 3 months).

6) Endocytosis, degradation of thyreoglobuline in lysosomes and release of T3 and T4

TSH stimulates the endocytosis of colloid and the resulting phagosomes fuse with cytosolic lysosomes to form phagolysosomes. Inside the phagolysosomes hydrolysis of thyreoglobuline into various fragments takes place. Apart from T3 and T4 (which are secreted into the bloodstream), MIT and DIT are formed as well. Their molecules are deprived of iodine by an enzyme deiodinase (which is dependent on NADPH) and the iodine is reutilized. 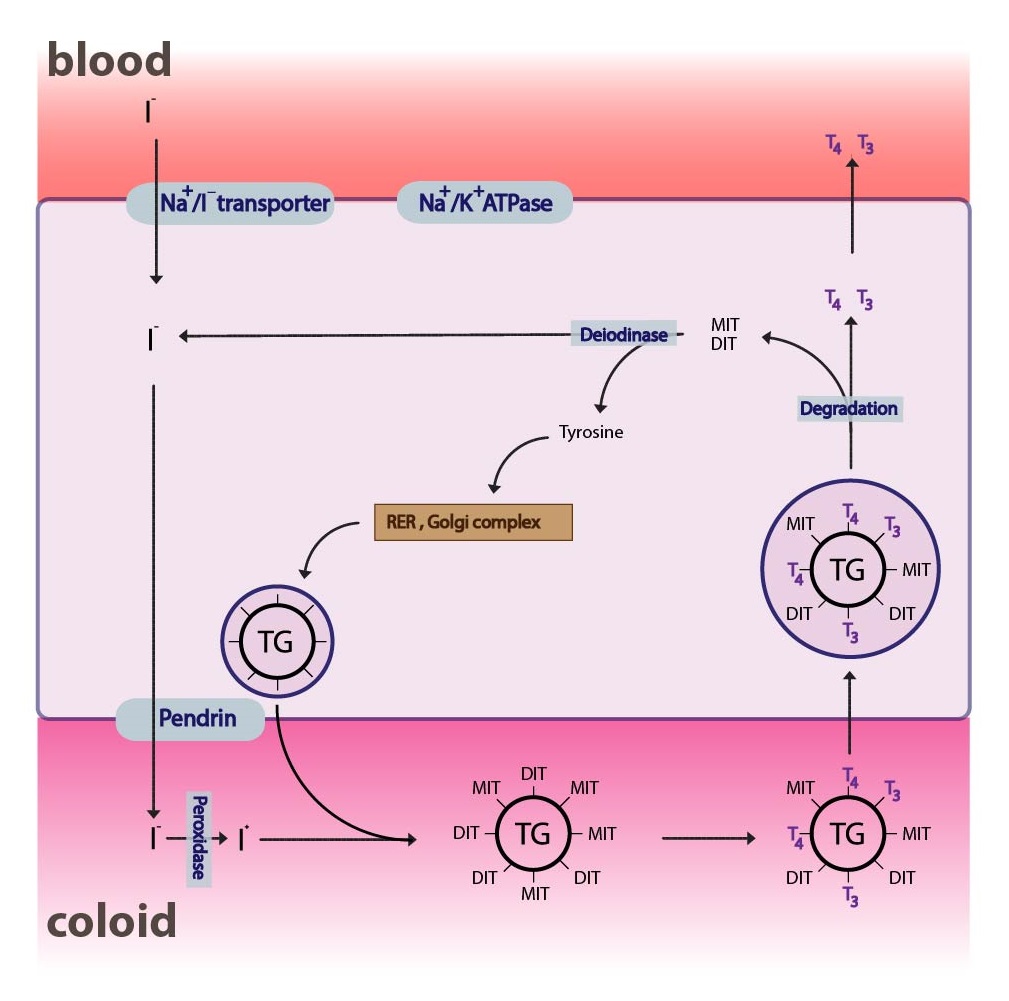 Transport of triiodothyronine and thyroxine in blood

T3 and T4 are (like other lipophilic hormones) transported in blood attached to plasma proteins. The existence of the bound and free (fT4, fT3) fractions determines certain equilibrium between them, where only a free fraction is physiologically active (and has an inhibitory effect on the TSH secretion). Under normal circumstances more than 98 % of T4 and T3 are bound. The hormones are transported by TBG (thyroxine binding globulin), TBPA (thyroxine binding prealbumin) and albumin as well. TBG shows the highest affinity among the transport protein and thus physiologically binds almost all T3 and T4. The amount of TBG in plasma is regulated and can change via different mechanisms (diseases, effect of some hormones). When testing the concentration of T3 and T4 it is important to differentiate between the concentration of the free (fT3, fT4) fraction and the total concentration of the hormones in blood. The total concentration can change even though the concentrations of free hormones stay the same (e.g. when the concentration of TBG changes).

Metabolism of triiodothyronine and thyroxine

Tetraiodothyronine (thyroxine) has a plasma half-life of approximately 6 days, whereas in the case of triiodothyronine the half-life is only about one day. On the other hand, T3binds to the intracellular receptors with a higher affinity and thus it brings most of the effect of thyroid hormones in tissues.

Majority of circulating T4 is in peripheral tissues converted by deiodinases. 5′-deiodinase converts thyroxine to T3 and 5-deiodinase to rT3. T4 thus can be considered as a prohormone with a certain level of an intrinsic activity. Synthesis of 5-deiodinase increases during starvation and some diseases. The aim is to save energy, rT3 has a minimal efficiency.

The catabolism of thyroid hormones involves their deiodination followed by an inactivating deamination and decarboxylation. In order to gain hydrophilicity they are glucuronidated and sulphated in liver and in this form they are excreted through bile into intestines. Only a portion is eliminated with faeces, the rest enters the enterohepatic recirculation and is absorbed back into the bloodstream. The conjugates with glucuronic acid can be excreted through urine as well.

Effects of triiodothyronine and thyroxine on intermediary metabolism

Thyroid hormones have an important calorigenic effect and are responsible for a long-term metabolic setup (the response of organism in order of days and weeks). They increase the O2 consumption in tissues (especially in brain, testes, uterus, lymph nodes, spleen and anterior pituitary), increase the number and the size of mitochondria and in general activate the cellular metabolism. These effects lead indirectly to an increase in heat production. Thyroid hormones have a direct effect as well, by acting upon the brown adipose tissue and activating the uncoupling proteins (e.g. thermogenin).

They increase the absorption of saccharides in the intestines, decrease the amount of glycogen and stimulate the utilization of glucose in the peripheral tissues. Performing the oGTT (oral glucose tolerance test) when the hormones are in excess (e.g. hyperthyreosis) reveals a so-called gothic shape of the curve – caused by a fast absorption of glucose and at the same time fast return of glycemia back to its baseline value.

Their effect upon the metabolism of proteins is complex. Thyroid hormones stimulate the synthesis of some of the proteins (Na+/K+-ATPase, respiratory chain enzymes), but at the same time cause catabolism of other proteins (e.g. muscle proteins).

Apart from having a direct effect on metabolism they modulate the function of other hormones as well – e.g. increase the number of adrenergic receptors and thus intensifying the effect of catecholamines or increase the expression of growth hormone (STH). Thyroid hormones are therefore considered to have a pro-growth influence.

Calcitonin is a hormone formed by parafollicular cells (so-called C-cells) of the thyroid gland. From the chemical point of view it is a 32 amino acid long peptide and the whole molecule determines its biological activity. By an alternative splicing of its gene another peptide is formed – termed CGRP (calcitonin gene related peptide). The half-life of calcitonin is about 10 minutes.

Calcitonin decreases the plasma level of calcium through 3 main mechanisms:

The secretion of calcitonin is increased during hypercalcemia, a state of increased plasmatic calcium. The extent of its physiological impact is disputed, because the above-mentioned effects occur in vitro only at concentrations that are not commonly found within the human body.

Hormones of the parathyroid gland

Structure and synthesis of parathyroid hormone

Parathormone (PTH) is a linear polypeptide consisting of 84 amino acids without any saccharides or other substances attached to its molecule. Its biological activity is determined by its N-terminus (approximately 1/3 of the molecule).

It is synthesized by rER in the form of a 115 amino acid precursor molecule preproPTH. After breaking away the signal sequence, the proPTH (90 amino acids long) is created, which is a direct precursor of PTH. The cleavage takes place in rER cisternae and the resulting proPTH is transported into GA, where another cleavage occurs and the PTH is formed. Parathormone can be directly secreted into the blood or can stay in the cell and form an emergency reserve.

PTH increases the levels of ionized calcium in blood due to its effect on the following organs:

Parathormone indirectly increases the activity of osteoclasts in the bone tissue. Originally, the effect of PTH was considered to be direct, but it was found that osteoclasts do not express specific receptor for PTH. PTH binds to the receptors located on osteoblasts, which afterwards intensify their stimulation of the osteoclasts precursor cells to differentiate. The rate of bone tissue absorption thus gradually (and in long-term) increases and the level of blood ionized calcium grows as well. Parathormone causes the osteoblasts to increase their expression of RANKL, a peptide that together with M-CSF activates the signal pathways for osteoclasts precursors differentiation.

Parathormone acts in the distal renal tubules where it increases the rate of reabsorption of calcium and magnesium ions from the lumen of tubules. At the same time it increases the secretion of phosphate into the tubular lumen and thus potentiates their excretion.

PTH indirectly increases the absorption of calcium ions from the intestinal lumen. It acts through activating the enzyme involved in the conversion of vitamin D precursors into their end- product, which is hormonally active – an upregulation of the renal 1α-hydroxylase. 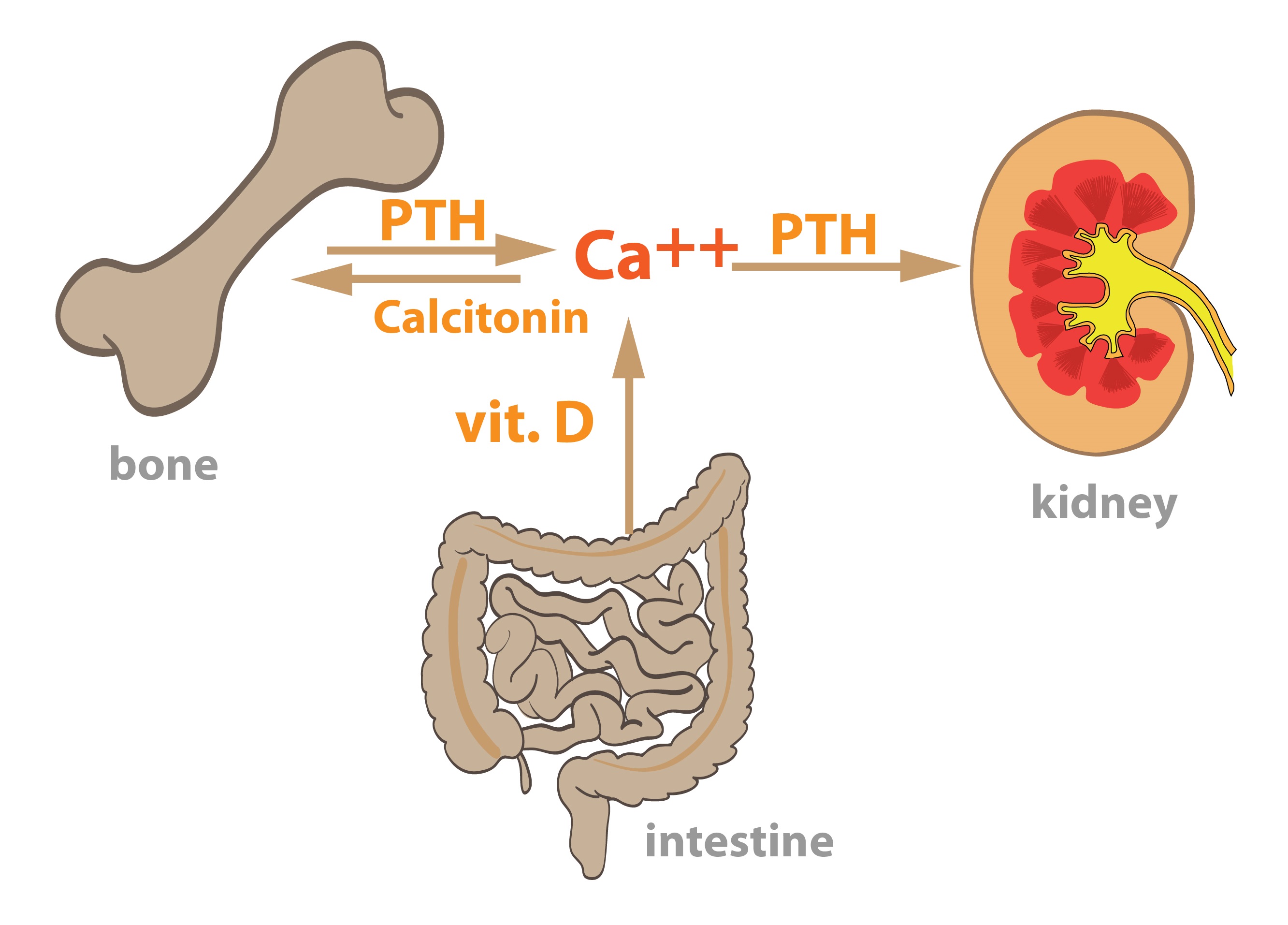 Half-life of PTH is approximately 10 minutes. Most of the newly synthesized PTH is degraded immediately after its synthesis and only a minority enters the bloodstream. Peripheral degradation of PTH takes place mainly in liver and kidneys. Inside the liver Kupffer cells, PTH undergoes proteolysis to carboxy- and amino-fragments. Amino-fragments are quickly degraded, but carboxy-fragments remain in the circulation and leave the body through kidneys.