1. Introduction to a bone metabolism

Bones perform many functions in a human body:

b) Osteoclasts are bone-degrading cells

Osteoblasts originate from mesenchymal cells of bone marrow. They exhibit high proteosynthetic activity and are rich in alkaline phosphatase. Their membranes contain  receptors for PTH, calcitriol, growth factors, estrogens etc. and also mechanoreceptors. Their primary function is bone matter formation, bone mineralization and management of maturation and activity of osteoclasts.

Osteoclasts are formed from hematopoietic cells (monocyte macrophage lineage). They contain lysosomes filled proteolytic enzymes (collagenase, gelatinase, cathepsins) and  acid phosphatase isoenzyme. Membrane of osteoclasts contains a proton pump (it is able to decrease pH = 7 to pH = 4) and  selected receptors (e.g. for calcitonin). Osteoclast activity but at the same time is controlled by signals from osteoblasts. Their primary function is bone resorption  (runs parallel to an increased calcemia).

Throughout life bone remodeling occurs continuously. It is very important because it allows the adaptation of form and organized structure of bones to biomechanical forces, maintaining the integrity of bone (repair microtraumas) and homeostasis of calcium and phosphates.

People achieve so-called peak bone mass – PBM at age 25. Followed by variable length  (average of  5 years) remodeling balance, which means that bone resorption intensity is equal to the intensity of bone formation. After this period continuous loss of bone mass begins, which is approximately 0,5 % per year – bone resorption predominates over bone formation. An increased rate of bone loss occurs in women after menopause – risk of developing  osteoporosis. On the contrary, obese people do not suffer a significant loss of bone tissue because their bones are more consistently loaded – a load is one of the main regulating mechanisms.

Bone remodeling cycle lasts about 4 months and can be divided into three stages:

3) Calcium and phosphate levels in the blood

Hormones affecting the metabolism of calcium and phosphates

Metabolism of calcium and phosphates is discussed in detail in Subchapter 7/6. At this point we restrict ourselves only to an information about the effect of these hormones on bone metabolism.

In the human body parathormone, calcitriol and calcitonin play a key role in the regulation of calcium and phosphate content.

Parathormone stimulates the resorption of bone by increasing the activity of osteoclasts (stimulates transformation of monocytes to osteoclasts). The result is an increased release of Ca2+ and phosphates from the bone.

Calcitonin inhibits osteoclast activity (inhibits transformation of monocytes to osteoclasts), thereby reduces bone resorption and it results in an increased deposition of Ca2+ in bones.

Glucocorticoids reduce the formation of new bone (they inhibit proteosynthesis in osteoblasts and their differentiation).

An overview of system control of bone metabolism 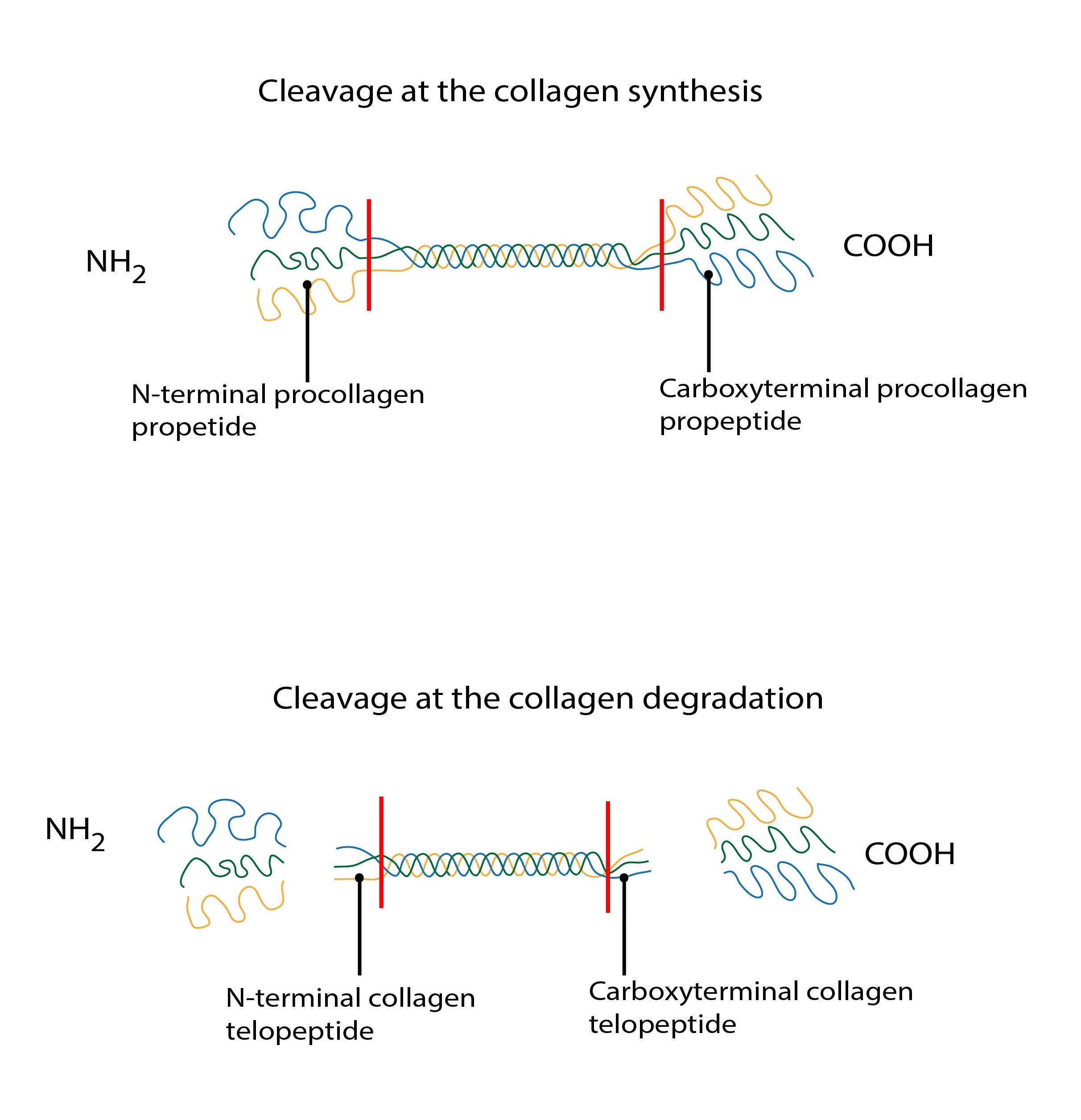 Carboxy-terminal telopeptides of collagen are formed by degradation of mature collagen fibers.

Osteomalacia (in an adulthood) / rickets (in a childhood)

These diseases are caused by an inadequate or delayed mineralization of osteoid. It is predominantly the loss of inorganic bone matter (bone decalcification), resulting in a softening of bones and their deformities (typical deformity of skull, spine, chest and long bones in rickets).

A  lack of vitamin D (calcitriol is an active form of vitamin D, its importance in the bone metabolism is mentioned above) is the most common cause of osteomalacia. Its deficiency leads to hypocalcemia, in which the body reacts by increased secretion of parathormone. This hormone among others, changes the ratio Ca2+ / phosphates (↑ calcemia and ↓ phosphatemia). Resulting disproportion does not allow to store mineral matter in osteoid. Vitamin D deficiency can be caused by the inadequate intake or kidney disease.