Muscle tissue is composed of myoblasts (muscle cells) and connective tissue. The primary function of muscle tissue is contraction responsible for many types of movement in human body – e.g. movement of organs or the whole body, blood circulation etc. Muscle tissue is distinguished into the striated skeletal muscle, striated cardiac muscle and smooth muscle. 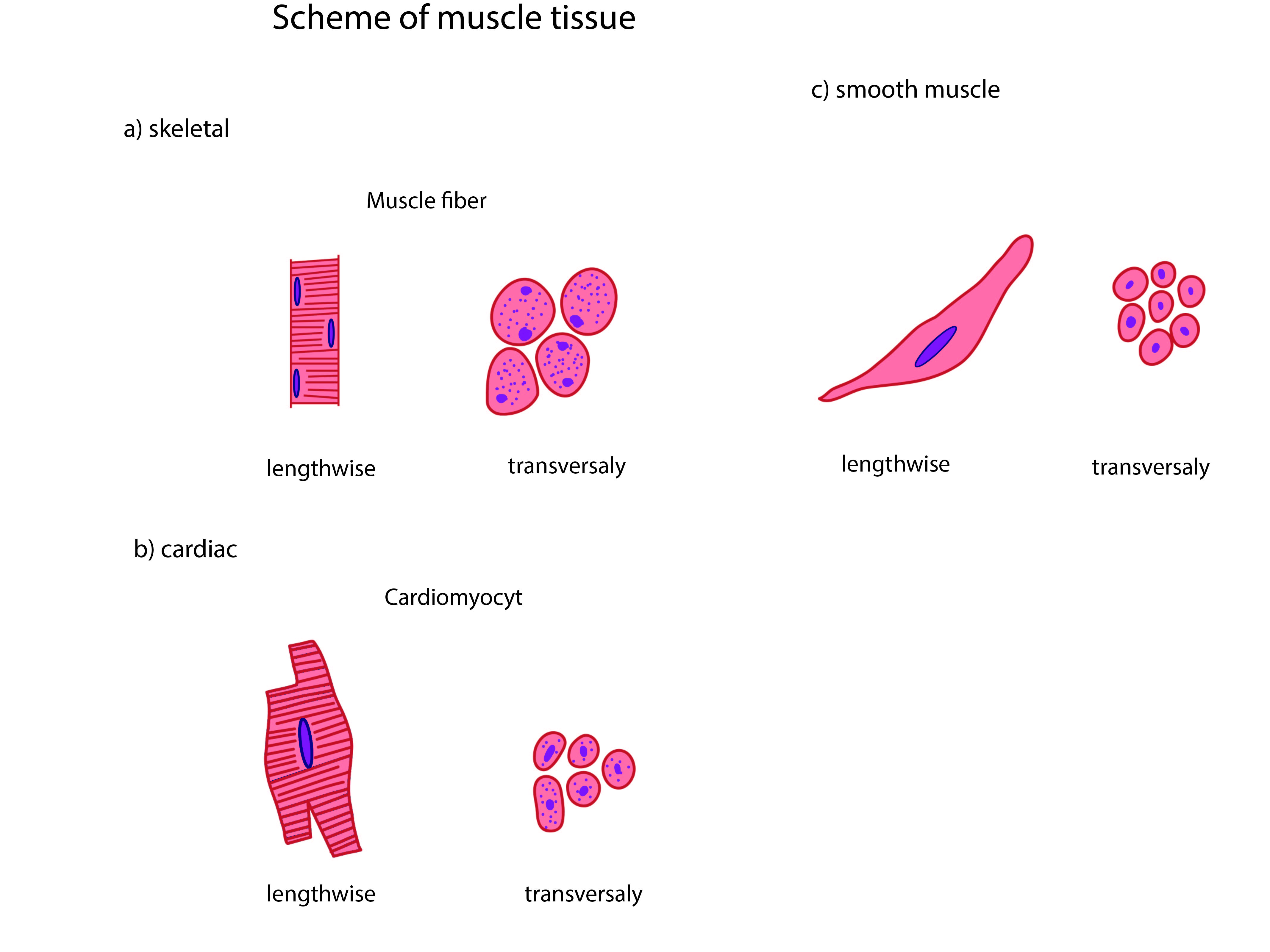 Photomicrograph of a skeletal muscle shows cross-striation – visible as alternating light and dark bands of myofilaments which differ in staining and birefringence. In polarizing microscopy, the dark bands are birefringent and better stained, they are called anisotropic A-bands (formed by thick myofilaments). The light bands are monorefringent and poorly stained, they are isotropic I-bands (created by thin myofilaments). The endings of thick and thin filaments are overlapped and due to that, on each A-band are distinguishable two peripheral segments containing both types of myofilaments and one central segment containing only myosin filaments called H-zone. I-bands are bisected by dense line called Z-line. A-bands are bisected M-line. The sarcomere is the regularly alternating portion of myofibrils between two adjacent Z-lines. 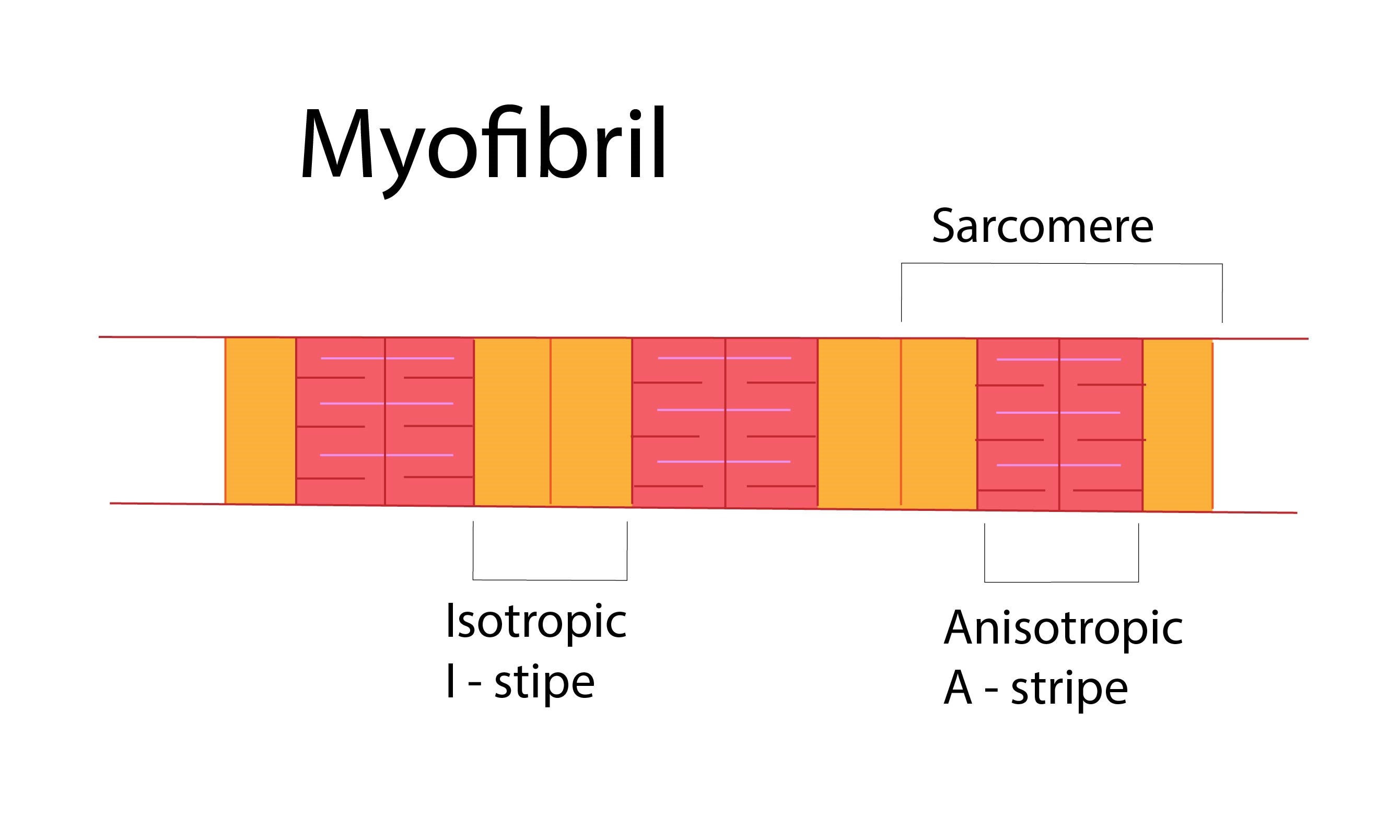 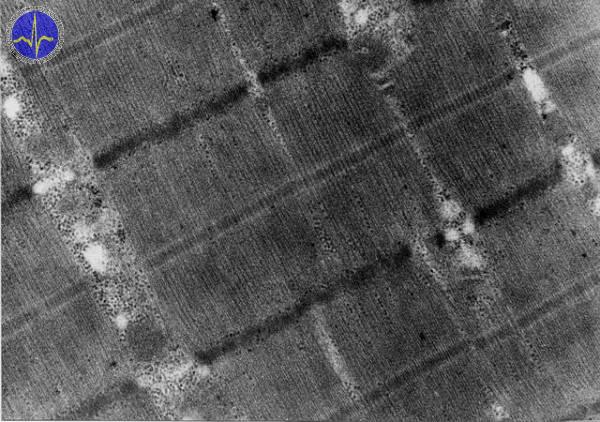 The thin filaments consist of actin and regulatory proteins tropomyosin and troponin. Actin filaments are formed by double-stranded helix of F-actin which arises from G-actin. G-actin (G means globular) polymerizes to form double-stranded helix of F-actin (F means fibrillar) and has a binding site for myosin. Tropomyosin consists of double-helix of two polypeptides and has a binding site for troponin. Troponin is a complex of three protein subunits:

Sarcolemma invaginates into muscle fiber and creates transverse tubular system or T-system composed of numerous T-tubules. These T-system is responsible for spreading of depolarization over the entire muscle fiber. T-tubule is localized on the boundary between A-band and I-band surrounded by adjacent sarcoplasmic reticulum cisternae – these cisternae and T-tubule form so called triad. Each sarcomere involves two triads.

Muscle fibers are classified according to the function and morphology into two groups:

The smooth muscle is composed of elongated spindle-shaped cells about 20 to 500 μm large (the largest are contained in uterus of pregnant woman).

The cells are present individually or in slight bundles found e.g. in walls of hollow organs (intestine, uterus etc.). The cells contain rod-shaped nuclei located centrally in the widened portion of cells. Nuclei are surrounded by numerous mitochondria, free ribosomes and Golgi complexes. Sarcoplasmic reticulum is reduced, membrane lacks T-tubules. Cytoplasm contain actin and myosin myofilaments which do not form myofibrils. Intermediate filaments are also found containing chiefly desmin and vimentin. The dense bodies are analogue of Z-lines in striated muscle and are responsible for anchoring the thin actin and intermediate filaments. These dense bodies are connected to the sarcolemma or dispersed in cytoplasm.

The smooth muscle is found in many organs of the human body – walls of hollow organs (GIT, respiratory system, urogenital system, skin, walls of vessels or iris.