Smell as well as taste evolved from much simpler analyser. This analyser was introduce to check the surroundings of an individual organism for potentially dangerous substances. Nowadays taste and smell are connected to the pleasure of enjoying delicious foods. But nevertheless they are still capable of point out poisonous or out of date food.

Smell is far less evolved in human than in other vertebrates. Olfactory cells are localised  at the upper part of nasal cavity in so called olfactory region with area about 4 square centimetres. Olfactory epithelium consists of 15 000 000 bipolar neuronal cells. Their dendrites have short cilia at the end. These cilia are dip into the hydrophilic mucus.

Olfactory receptor is a fascinating apparatus. Here the brain is very close to the outer environment, with only thin bone plate impeding. Axons of olfactory neurons penetrate this thin cribriform plate and enters the brain.

When effluvium (odorant) enters olfactory region, there are two processes which can occur depending on its chemical character:

1) Odorant is hydrophilic: it resolves in hydrophilic mucus and stimulates receptors of olfactory neurons

2) Odorant is lipophilic: it has to be bound on OBD (odorant binding protein), then it can be identified by olfactory neurons. OBD can be found deeper in the mucus. There are many different OBDs, some of them even act in a taste perception as well as in olfaction.

Odorants are usually small molecules, not bigger than 20 carbons atoms.

Cilia of olfactory neurons carry molecules of receptor, all of which are coupled with G-protein (so called G-olf protein). Stimulation of receptors activates adenylate cyclase (via G-protein). Increase in cAMP concentration opens nonselective cation channels, which in turn cause influx of sodium and calcium. So that membrane is depolarised and action potential is fired.

These olfactory receptor molecules are coded by 1000 different genes in mice. It is estimated that there are about 500-750 genes in humans. Single olfactory cell express receptors that are coded by one gene only. This mean there are up to 750 different olfactory cells in humans. This doesn’t mean we can differentiate 750 odorant molecules, in fact one receptor act as an analyser for a whole group of odorants with similar chemical structure.

2004: Nobel Prize in physiology and medicine – Linda B. Buck, Richard Axel – For discovery of olfactory receptor and its post-receptor processes.

Threshold and adaptation of olfaction

Threshold differs significantly for each odorant. It can be as low as 350 pg/l for methyl mercaptan (garlic aroma). We can differentiate about 10 000 (!) distinct smells, on the other hand we can’t recognise concentration of the odorant. Concentration recognition is an ability that most quadrupedal vertebrate posses. Threshold is surpassed while the concentration of odorant raises by 25 %.

If the odorant lingers at the surroundings without concentration changes for a period of time (few minutes). Our conscious registration of the particular odorant start to diminish. This phenomena is called adaptation. Adaptation is specific process, that means we can adapt to some odorant without alternating the other olfactory perceptions.

Women are more sensitive to odorants, particularly during the ovulation. Sensitivity decreases with age. Loss of olfaction is called anosmia.

Axones of mitral cells continue to higher levels of the brain. According to some authors there are two neuronal pools for processing the olfactory information:

Is the oldest brain area for processing an olfactory information. It can be found enclosed to the rostral thalamus. This system works in close relationship with limbic system (especially septal nuclei). This system is responsible for primitive reflexes like salivation, licking, etc.

This system contains prepyriform and pyriform cortex and amygdaloid nuclei. Lateral olfactory system has a strong interconnections with limbic system (as well as medial olfactory system). Especially strong communications can be found between its own structures and the hippocampal formation. This system may play role in sustaining of mental anorexia.

VMO is located near basis of the nasal septum. Its main function is to register socially important odorants – pheromones for example. First neuron of VMO pathway synapses in accessory olfactory bulb. The second neuron transmits olfactory information to the limbic system (most notably to the amygdala and hypothalamus).

Receptors of VMO neurons are far more sensitive than those located in olfactory region. VMO signals have direct impact on individual mood and behaviour.

According to the several authors VMO is not well evolved in humans.

Receptors for taste are located in taste buds. Taste buds are located in small structures called papillae. Papillae can be found on the surface of the tongue, soft palate and oesophagus. Humans are capable of differing five basic tastes: bitter, sweet, umami, sour and salt.

Bitterness probably developed during the evolution as a warning sign of a toxic substances. Thus preventing an animal from consummation of such a food. On the other hand sweetness and umami indicated healthy nutrients rich food back then.

There are up to 10 000 taste buds, with 100 sensory cell in each of them. Apical pole of every cell is provided by microvilli.

According to former studies specific regions of tongue were supposed to register specific tastes. These studies were found obsolete and inaccurate. According to present-day authors, there are some differences in distribution of sensory cells for specific taste modalities. But these differences are of no significance. Every taste bud contains cells capable of registering all five taste modalities. 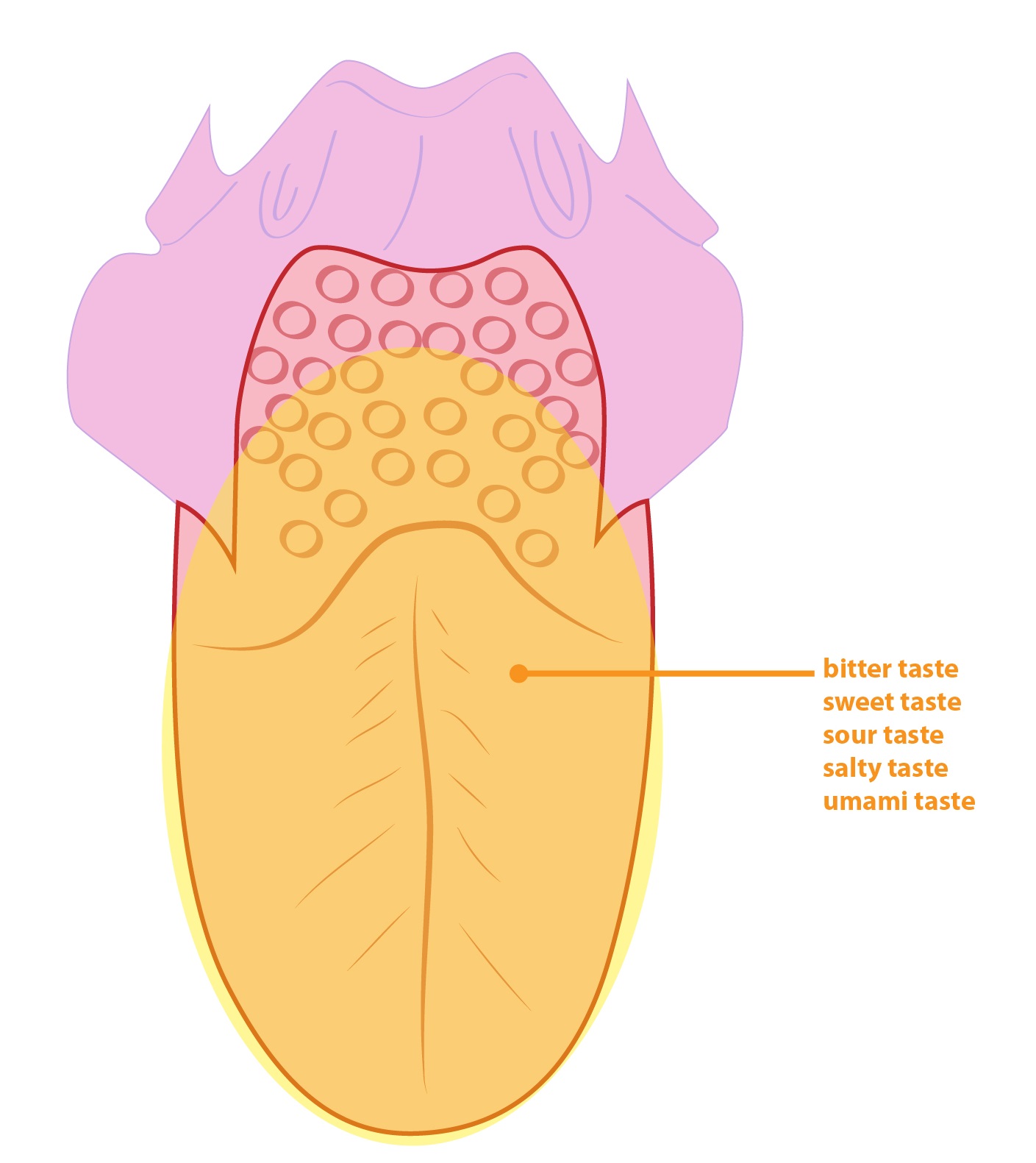 Perception threshold differs according to modality. Sensory cells in humans are most sensitive to a bitter modalities – most notably strychnine hydrochloride (1.6 μmol/l). On the other hand humans are far less sensitive to a naturally sweet substances – glucose (80 mmol/l), saccharose (10 mmol/l). Sweet synthetic substances are capable of exciting sensory cells at much lower concentration, for example saccharine induce action potential at concentration of 23 μmol/l. As is true for olfaction, humans are generally not capable of specifying substance concentration. Greater than 25% change in concentration is needed to determine an increase or decrease in a taste intensity.

Sensory cells are not bipolar neurons. They lack an axon. Dendrite of a neuron is embedded into the sensory cell membrane. Sensory cell communicate with embedded dendrite by purinergic receptors (ATP is acting as a ligand). Transfer of information is accomplished via VII., IX. and X. cranial nerve. Worn off cells are replaced by the mitoses of basal taste buds cells.

Bitterness developed during the evolution as a warning sign of a toxic substances. Bitterness receptors are activated by substances with long chains containing nitrogen, alkaloids (morphine, caffeine, strychnine, nicotine) and urea. They are also sensitive to magnesium, calcium and ammonium salts.

Similar receptors can also be found in the stomach and intestine. These receptors are probably sensitive to high concentration of a particular medication or toxins. While stimulated they induce nausea and vomiting as a protective reflex. There is some evidence that these are involved in a second defence barrier, which applies if a potentially dangerous substance is swallowed despite its bitter taste.

As well as in case of bitterness sweetness receptors are coupled with a G-protein gustducin. Gustducin activates phosphodiesterase which degrades intracellular cAMP. Decrease in cAMP concentration closes potassium channels. Closure of potassium channels leads to a membrane depolarisation. Natural and synthetic substances act similarly. There are three sweetness receptors T1R1, T1R2 and T1R3. One cell usually express two of these receptors, which form a heterodimer. Heterodimers only are capable of registering sweet substances.

Mechanism of registering L-glutamate depends on a receptor coupled with G-protein as it is true for bitterness and sweetness. This receptor is called metabotropic glutamate receptor type 4 – mGluR4. And it also activates phosphodiesterase.

This two perceptions share a similar registration mechanism. There are constantly opened ions channels in the membranes of both sensory cell types. In particular it is an ENaC (sodium channel) for saltiness and ASIC (acid-sensing ion channel, proton channel) for sourness. Influx of these ions leads to depolarisation. ENaC and ASIC belong to a DEG/ENaC (degenerin, epithelial ion channel) channel family. Members of this family aren’t only taste receptors, there are many mechanoreceptors (sensory ganglia) as well as baroreceptors (arteries).

Decrease in pH equals to an increase in H+ concentration. There are three different channels for perception of sourness. The first one: ASIC was described in previous part. Two others are ion channels, where H+ ion acts as an ligand. Potassium channel, which is normally open, can be blocked by H+ ion, whenever pH significantly decreases. Diminishing an efflux of potassium leads to depolarisation. Another one is a sodium channel, which is opened by binding of H+. Sodium influx leads to a membrane depolarisation and fires off an action potential. Increase in sodium concentration also causes  opening of calcium channels. The sourness of an acid is due proportion to a decrease of pH. But there is a paradox, organic acids taste sourer than inorganic ones. The cause of this phenomenon is unknown. Same ion channels analyses pH of cerebrospinal fluid and blood plasma. Cerebrospinal fluid analyser can be found in a central chemoreceptor area in brain stem.

Saltiness is perceived by ENaC receptor. It is a permanently opened channel which allow passage of sodium to a cell cytoplasm. Sodium influx leads to a membrane depolarisation and to an opening of voltage gated calcium channels. ENaC channel consists of three subunits. Production of at least one of these subunits is under a control of aldosterone. More ENaC is expressed (due to increase aldosterone plasma level) if there is a salt deficiency. Increase of ENaC density leads to salt craving. This phenomenon demonstrates that human organism can change its food preferences according to its own needs. Pathologically there is a salt craving in patients with Addison’s disease.

Review of taste perception at a receptor level

Transmission of information into the central nervous system

When a chemical substance with a certain taste is applied, action potentials with high frequency occur. As the stimulus continues to be perceived the frequency of action potentials slowly decreases. This is a reason for serving a cheese at a wine-tasting. Cheese ends a perception of previous stimulus (whine). So a next sip of wine is perceived with high intensity. Taste perception is transmitted to the CNS by three different ways: 1) The first two thirds of tongue are innervated by lingual nerve. Fibres for taste perception are led from the lingual nerve through chorda tympani to facial nerve. Facial nerve terminates in the solitary nucleus. 2) The last one third is innervated by glossopharyngeal nerve, which terminates in  the solitary nucleus. 3) Base of the tongue and pharyngeal region is innervated by vagus nerve. Vagus nerve also terminates in the solitary nucleus of the brain stem. 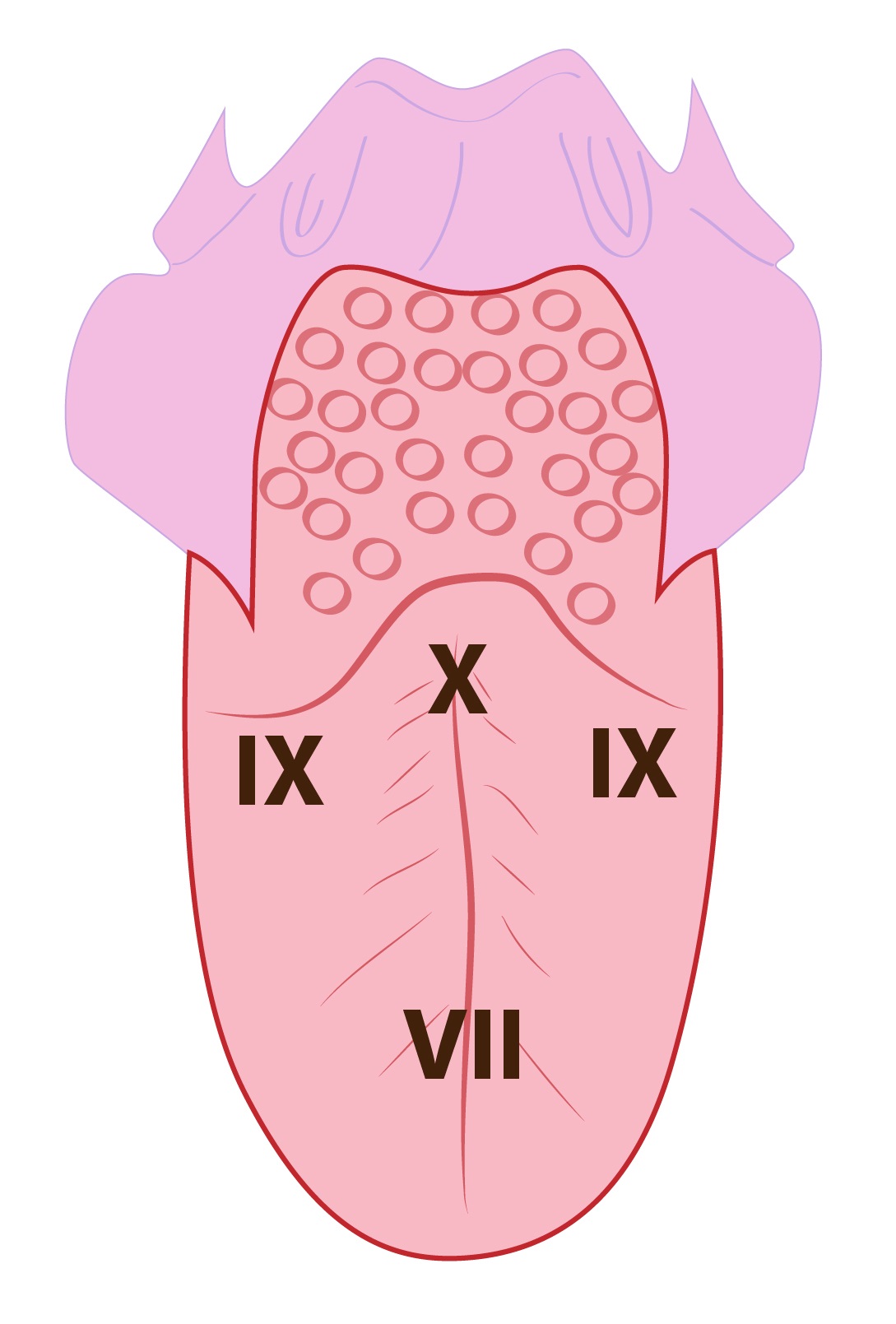 Second neurons of taste pathway originate In solitary nucleus. Their axons continue to a  ventral posteromedial nucleus of thalamus (VPM). In VPM a third neuron originates. It continues to a postcentral gyrus. More precisely to a part of postcentral gyrus hide deep in the Sylvian fissure. Subchapter Authors: Patrik Maďa and Josef Fontana