During physical exertion the heart muscle consumes more oxygen. It’s delivery is provided by increased blood flow in coronary arteries and it can be increased up to 5 fold. This mechanism is called coronary flow reserve. Thus the oxygen consumption is one of the basic factors affecting coronary blood flow. In case that there is atherosclerotic plaque in coronary artery, the patient may experience symptoms of hypoperfusion of the heart muscle. These plaques can narrow the coronary arteries and can cause symptoms such as chest pain (angina pectoris) or shortness of breath. Complete occlusion of coronary artery can cause myocardial infarction. This is reflected  as an acute ST segment elevation on the ECG (in longer term there can be a pathological Q wave), followed by loss of ability to contract and chest pain mediated by autonomous nerve system. From histopathological point of view there is a necrosis of cardiomyocytes, starting from subendocardium to subepicardium. Extent of necrosis depends on the size of the area that is supplied by an enclosed artery, and also depends on the duration of the closure. The only way of solution (getting blood delivery to the area of hypoperfusion) is to restore perfusion in closed artery by percutaneous coronary intervention (PCI) or by cardiac surgery (coronary artery bypass graft). In past the thrombolysis was used as well, but in these days PCI and cardiac surgery are the method of choice. Myocardial infarction can be complicated by arrhythmias, heart failure or by mechanical complications such as rupture of the heart wall, ventricular septum or papillary muscle.

During the cardiomyocytes’ damage the intracellular substances such as troponin T, I (different from the troponin in skeletal muscles) are released into the blood and can be tested as a marker of cardiomyocytes’ necrosis. The other substances such as creatine kinase (CK) and its isoenzyme CK-MB, myoglobin and AST, which are not so specific as troponin, are also released into to the blood. 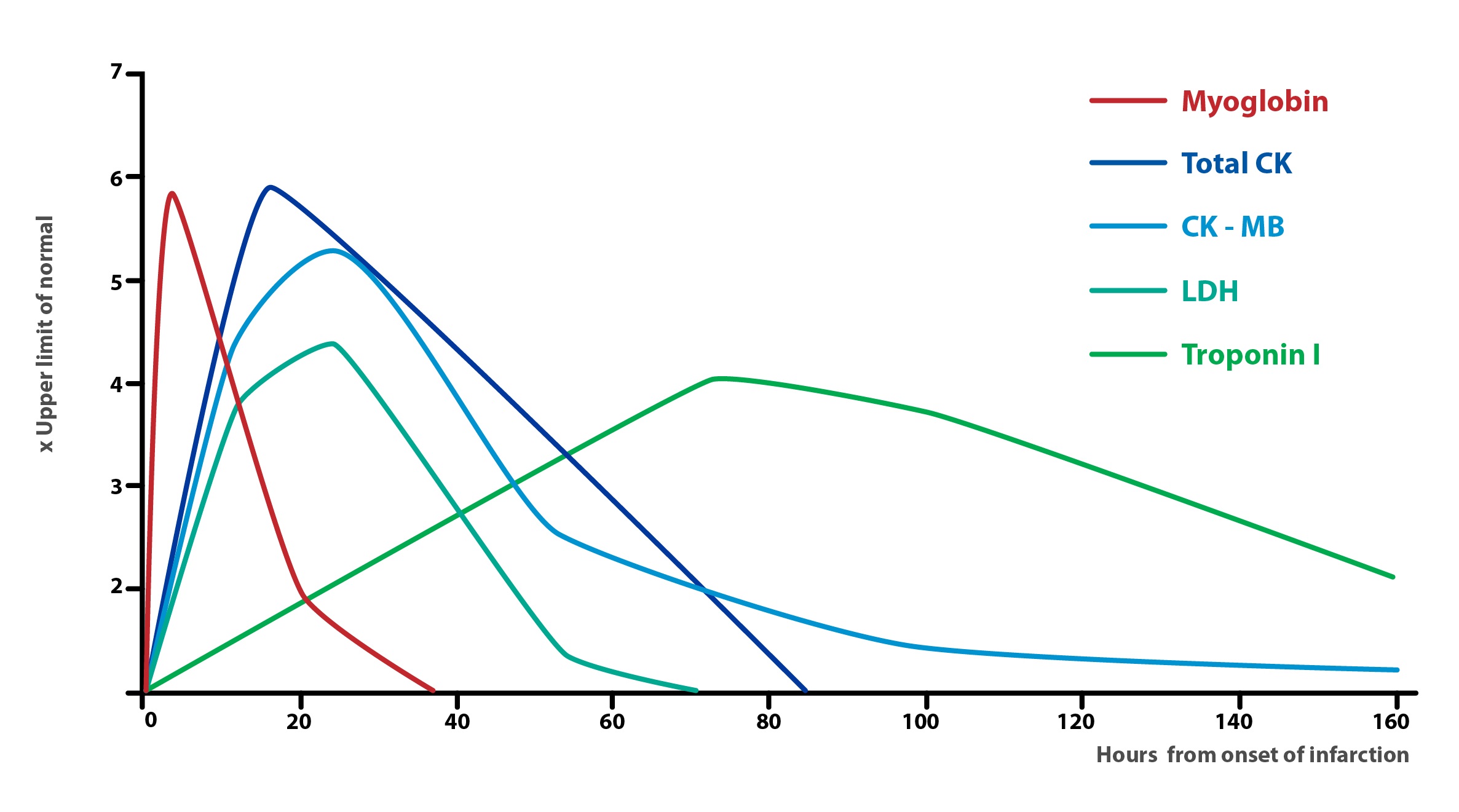 Valve disease is caused by valvular insufficiency or valvular stenosis. Valvular insufficiency leads to the backflow (regurgitation) of the blood (into the atrium or ventricle) and causes volume overload. Valvular stenosis leads to increased pressure and decreased blood flow when the blood has to be pushed through stenotic area, it causes pressure overload. Untreated valve disease leads to heart failure.

The heart beats with normal sinus rhythm in the range of 60-90 beats per minute. Physiologically, the heart rate slows down during sleep (bradycardia) and  it accelerates for example during exercise (tachycardia). In young people the sinus arrhythmia may occur during respiration. The tonic activity of vagus nerve is inhibited in deep inspiration and thus the frequency increases, in opposite during expiration the frequency of the heart decreases. Under certain conditions the sinus bradycardia and sinus tachycardia are pathological. Then there are arrhythmias. Supraventricular arrhythmias like for example atrial fibrillation (AF), which is most common. Disorganized electrical impulses in AF originating in the roots of the pulmonary veins and other places of atrium with irregular conduction to ventricles. Another example of supraventricular arrhythmia is atrial flutter with regular conduction to ventricles caused by reentry loop.

In case of pacing the heart rhythm from ventricular conduction system, the rate slows down to 30-40/min and QRS complexes on the ECG are wider than 120 ms. In ventricular fibrillation the depolarization of cardiomyocytes is caused by several mechanisms – reentry, triggered activity, ectopic foci of excitation or combination of these. In ventricular fibrillation (VF) the heart work is ineffective, fibrillating ventricals are not pumping blood and the circulation stops. As an effective therapy of VF there comes a defibrillation. Ventricular extrasystole is a contraction that arises from ectopic foci in the area of ​​Purkinje fibers, it has wide QRS complex. Supraventricular extrasystole is characterized by slender QRS complex.

The activity of the heart is affected by the level of ions in blood and in intracellular compartment. The most important ions for the heart function are K+, Ca2+ and Na+.

K+ takes the task of maintaining the membrane potential, which in disorder of K+ homeostasis becomes more negative (in hypokalemia ) or less negative (in hyperkalemia) . This affects the excitability of electrically active tissues. K+ intake is not significantly regulated. After uptake of large amount of K+ is the most of it is under the influence of insulin moved from the blood into the cells (about 80 %), from where it is slowly released and eliminated by the kidneys.

The transfer of K+ into cells is influenced by various factors:

4 ) Aldosterone increases the transfer of K+ into the cells, but in the kidney aldosterone causes increased urinary excretion of K+

5 ) pH – in alkalosis when the extracellular fluid has lack of protons, H+ emerges from the cells in the exchange for K+ (if positive ion exits from the cell, then it must be replaced by another positive ion). In acidosis opposite action happens,  when the pH is compensated by transferring H+ into the cells, ions of K+ are in exchange released.

Hypokalemia occurs when the total body amount of K+ is decreased, rarely it is caused by bigger transfer of K+ into the cells. Symptoms and signs become evident when the level of K+ is lower than 3 mmol/l. Real deficit of K+ is caused by it’s inadequate intake (starving, anorexia, alcoholism), profuse sweating, diarrhea, vomiting (direct loss of K+, indirect loss because of alkalosis and because of increased secretion of aldosterone caused by water loss) or it’s increased renal excretion (diuretics, hyperaldosteronism, hypercorticism, polyuric phase of kidney failure). Relative K+ deficiency is caused by it’s increased move to cells in acute alkalosis or sudden massive increase in circulating insulin. In hypokalemia the conduction of action potential in heart is prolonged, extrasystoly occur. On ECG the T waves get flatten, U wave can occur. Severe hypokalemia can cause ventricular arrhythmia including ventricular fibrillation.

For myocardium and for neuromuscular excitability is mainly important the ionized fraction of calcium. It’s decrease results in higher excitability, it’s increase in contrast stabilizes the membranes and reduces the excitability of cells.  The increase of intracellular concentration increases the excitability of the cells (e.g. during tissue hypoxia). Calcium ions are responsible for the contraction of the heart, but at the same time the cardiomyocytes has not sufficiently developed sarcoplasmic reticulum, thus a heartbeat, is significantly dependent on extracellular calcium.

When Ca2+ levels are higher than 4 mmol/l a hypercalcemic crisis appears – confusion, unconsciousness and cardiac arrest in systole. Hypercalcemia shortens the action potential, which is reflected in the ECG with QT interval shortening. Severe hypercalcemia leads to a reduction of the amplitude of T waves and may also cause their inversion. In hypocalcemia  QT interval is prolonged and can lead to triggering ventricular arrhythmia.

Blood pressure is determined by cardiac output and by peripheral vascular resistance. Optimal blood pressure in relationship to cardiovascular risk is 120/80 mmHg. Hypertension is defined by blood pressure 140/90 mmHg and higher. For the diagnosis of hypertension we need to measure these values at least two times from three, in two separate visits at the doctor.

Untreated hypertension leads to pressure overload of left ventricle. In first time there is a compensatory hypertrophy of the ventricle, but from the long term of view it leads to  heart failure and other organ damage. We distinguish two types of hypertension. First one is primary (essential) hypertension, second one is secondary hypertension.

The primary (essential) hypertension affects about 95 % of patients with hypertension. It is a multifactorial disease and we still today don’t know all of the factors which are involved.