1. Introduction to Mechanics of Breathing

4. Pressure Changes during the Pulmonary Cycle

Introduction to Mechanics of Breathing

Every pulmonary cycle consists of the following phases: intake of breath (inspiration) and exhalation (expiration). These phases alternate periodically providing a sufficiently high partial pressure of oxygen and, at the same time, a sufficiently low partial pressure of CO2 in the alveoli. Keeping up these partial pressures is vital for effective exchange of respiratory gases across the alveolocapillary membrane (also called alveolar respiratory membrane). Only at the optimal course of pulmonary cycles, a sufficient extraction of CO2 from the blood and its saturation by oxygen are provided.

How the pulmonary cycle proceeds and what mechanisms are involved in expiration and inspiration will be discussed in this section.

Before discussing the pulmonary cycle, it is necessary to introduce some new terms that will help you understand it. 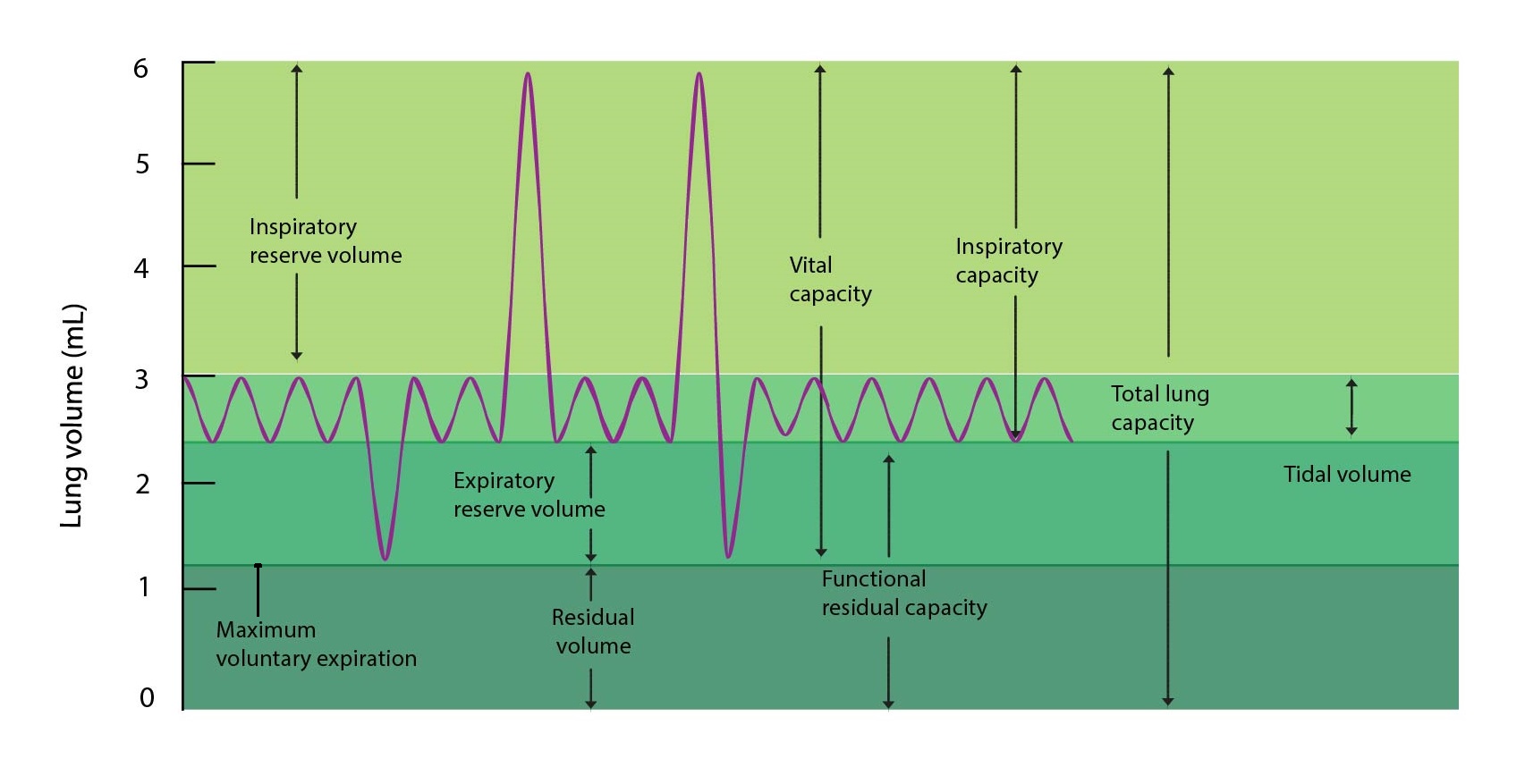 Residual volume is the volume of air that remains in the lungs after a maximum forced expiration, thus the amount of air remaining in the maximally contracted lungs. For an adult 70 kg man is about 1200 ml.

When describing the pulmonary cycle it is sometimes necessary to use the sum of several volumes introduced above. Such sum is called capacity.

Functional residual capacity is the amount of air that remains in the lungs after completed resting exhalation and is equal to the sum of expiratory reserve volume and residual volume of the lungs.

Under this term we mean the maximal volume of air that can be exhaled after the completion of the maximal forced inspiration. In other words, it is the volume of air that the lungs are able to expel by maximum exhalation after maximal strenuous inspiration. It therefore represents a sum of inspiratory reserve volume, tidal volume and expiratory reserve volume.

Total lung capacity is the maximal volume of air that can be held in the lungs after maximal forced inspiration. It can also be said that this is the maximal volume which can somebody’s lungs achieve. It is the sum of all four volumes described above, i.e. residual volume, expiratory reserve, tidal and inspiratory reserve volume. More often is expressed as the sum of vital capacity and residual volume of the lungs.

There are two ways how the lungs can be shrunk or stretched:

1) The activity of the diaphragm

2) The activity of the intercostal muscles

The activity of the diaphragm

Normal resting respiration is almost exclusively mediated by downward and upward movements of the diaphragm. During inspiration, the diaphragm contracts and this movement pulls the lungs downward, thereby increasing their volume. During resting breathing this movement continues until achieving the tidal volume (VT). Consequently, relaxation of the diaphragm initiates expiration. Resting exhalation is a passive process, since no muscles participate in it. The only mechanism involved are elastic forces of the lungs and chest wall, which due to the elastic properties of the tissues shrink to its original volume. Thus, the same volume of air is expelled, as was aspirated – 500 ml.

The activity of the intercostal muscles

If the need for increased alveolar ventilation arises, as is the case of physical exercise, the activity of the diaphragm is supplemented by ingenious system of levers formed by intercostal muscles . The arrangement of these muscles is as follows:

There are also intimal intercostal muscles, but their function in the respiratory movements is not very significant.

At rest, the ribs are arranged so that their long axes point downwards and intercostal muscles are relaxed. During forced inspiration, the contraction of the diaphragm is accompanied by lever composed of external intercostal muscles, the axes of the ribs are then shifted nearly into a horizontal position, and the anteroposterior dimension of the chest is increased. This further increases the volume of inhaled air up to the value of the inspiratory capacity (IC) and the lungs may extend up to its maximum capacity (TLC). During forced inspiration, the action of elastic forces is not sufficient for rapid return to original volume of the lungs. Therefore, the lever composed of internal intercostal muscles is engaged and this lever acts synergically with the elastic forces.

Pressure Changes during the Pulmonary Cycle

1) During inspiration, the pressure in the alveoli is negative compared to the atmospheric pressure. Air flows into the respiratory system.

2) During expiration, the pressure in the alveoli is positive above atmospheric pressure. Air flows from the airways into the atmosphere.

Respiratory muscles (and elastic forces) thus create a pressure gradient (pressure difference) between the alveoli and the atmosphere, and all of that occurs only by changes of alveolar pressure.

If the lungs were taken from the rib cage, they would have collapsed immediately. Their volume is maintained by the elastic force of the rib cage, to which inner surface are the lungs attached by a negative pressure in the pleural cavity.

Pleural cavity is purely a morphological term since under physiological conditions the space between parietal and visceral pleura is completely filled with only a thin layer of fluid. This so-called pleural fluid lubricates the layers of pleura and facilitates their relative movement.

Value of the pleural pressure was experimentally determined to minus 5 cm of water column. This ensures adhesion of the two pleural layers. This value changes during the pulmonary cycle. During inspiration, it falls to minus 7.5 cm of water since the volume of the pleural cavity increases (in fact, it is rather the area of contact of visceral and parietal pleura what increases).

Under this term we mean the difference between alveolar pressure and pleural pressure. Its size is related to the elastic forces of the chest and the lungs. Transpulmonary pressure increases each time you inhale and falls as you exhale.

As stated above, the lungs tend to collapse completely. This is prevented by negative pleural pressure, which keeps the visceral pleura in close contact with the parietal pleura (the one adjacent to the rib cage). The rib cage, on the contrary, would expand slightly in its anteroposterior dimension after removal of the lungs. This phenomenon is evident in patients with pneumothorax: the air got into their pleural cavity, their lungs collapsed and chest took a shape determined by elastic forces (so-called barrel chest) .

Compliance of the lungs

Compliance (stretchability) is a value that indicates how much changes the volume of the lungs per unit change in transpulmonary pressure. When expressed as equation:

The higher the compliance, the greater the change in volume per unit change in pressure. The value of 200 ml per 1 cm of water is considered physiological. Deviation in any direction is regarded as pathological. The increase in lung compliance occurs in emphysema, a disease when the individual alveoli coalesce and form large chambers. In these chambers the exchange of respiratory gases can not take place effectively due to the reduction of the area of alveolocapillary membrane. In contrary, decrease in lung compliance occurs for example in pulmonary fibrosis.

Note: The value of compliance can be determined for all hollow organs. You just need to measure the change in volume when exposed to transmural pressure. For example, you can get the value for the intestine, blood vessels, etc. Compliance provides valuable information on the state of the walls of a particular organ and its changes are described in the pathophysiology of many vascular diseases and pathology of the gastrointestinal system.