1. Functional morphology of the respiratory system

Functional morphology of the respiratory system

Nasopharynx is lined by ciliated pseudostratified columnar epithelium. The lymphatic tissue is organized into tonsils. 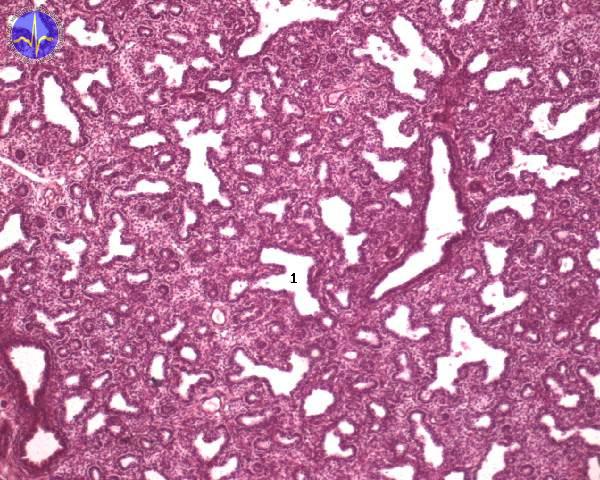 3) Saccular phase (25.-36. week) The epithelial cells differentiate and the production of surfactant initiates.

The right lung is composed of 3 lobes, the left one of 2 lobes. Trachea divides in bifurcation into two main bronchi entering the lung in the hilum. Main bronchi (primary bronchi) divide into lobar bronchi (secondary bronchi) – three on the right side and two on the left side. Lobar bronchi branch into tercial segmental bronchi – 10 on the right side and 8 on the left side.Terminal bronchioles branch into 2 or more respiratory bronchioles and they branch again into alveolar ducts (2 to11 branches). At the blind-ending alveolar ducts occur alveolar sacs and alveoli. During the branching of bronchial tree, structure of the wall of air tubes changes – cartilage tissue disappears and the amount of smooth muscle cells and elastic fibers decreases. Large bronchi are lined by ciliated pseudostratified columnar epithelium and their loose connective tissue contains lymphatic follicles and immune cells – lymphocytes, macrophages, plasma cells producing immunoglobulins A and seromucous glands. 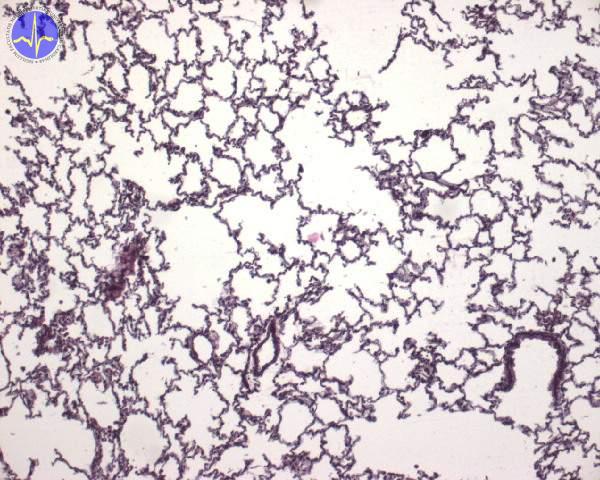 1) Type I pneumocytes – are flattened cells covering about 97 % of alveolar surface lining but they represent only 40% of total cellular count in alveoli.

2) Type II pneumocytes – they exhibit secretory characteristics and are responsible for production of surfactant. Their cytoplasm contains lamellar bodies with surfactant. 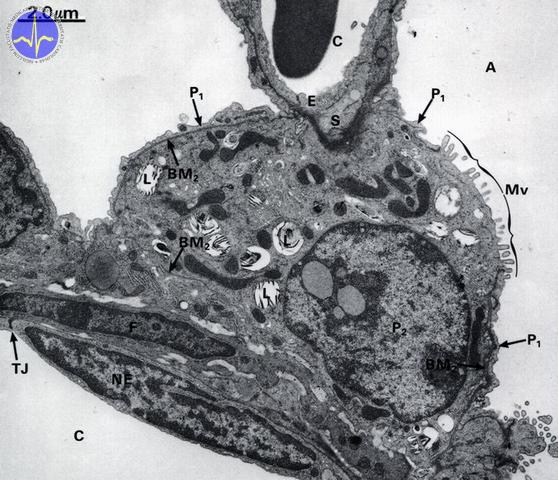 Surfactant is protein-rich fluid with superficial layer of phospholipids. Production begins in 24th week of fetal development. Surfactant decreases the alveolar surface tension on the air-blood barrier and thus, the power required for expansion of lungs decreases. It also prevents the collapse of alveoli. Production and maturity of surfactant is important for survival of premature infants. Production of surfactant can be increased by intramuscular application of  cortisol to mother with threatened premature delivery. 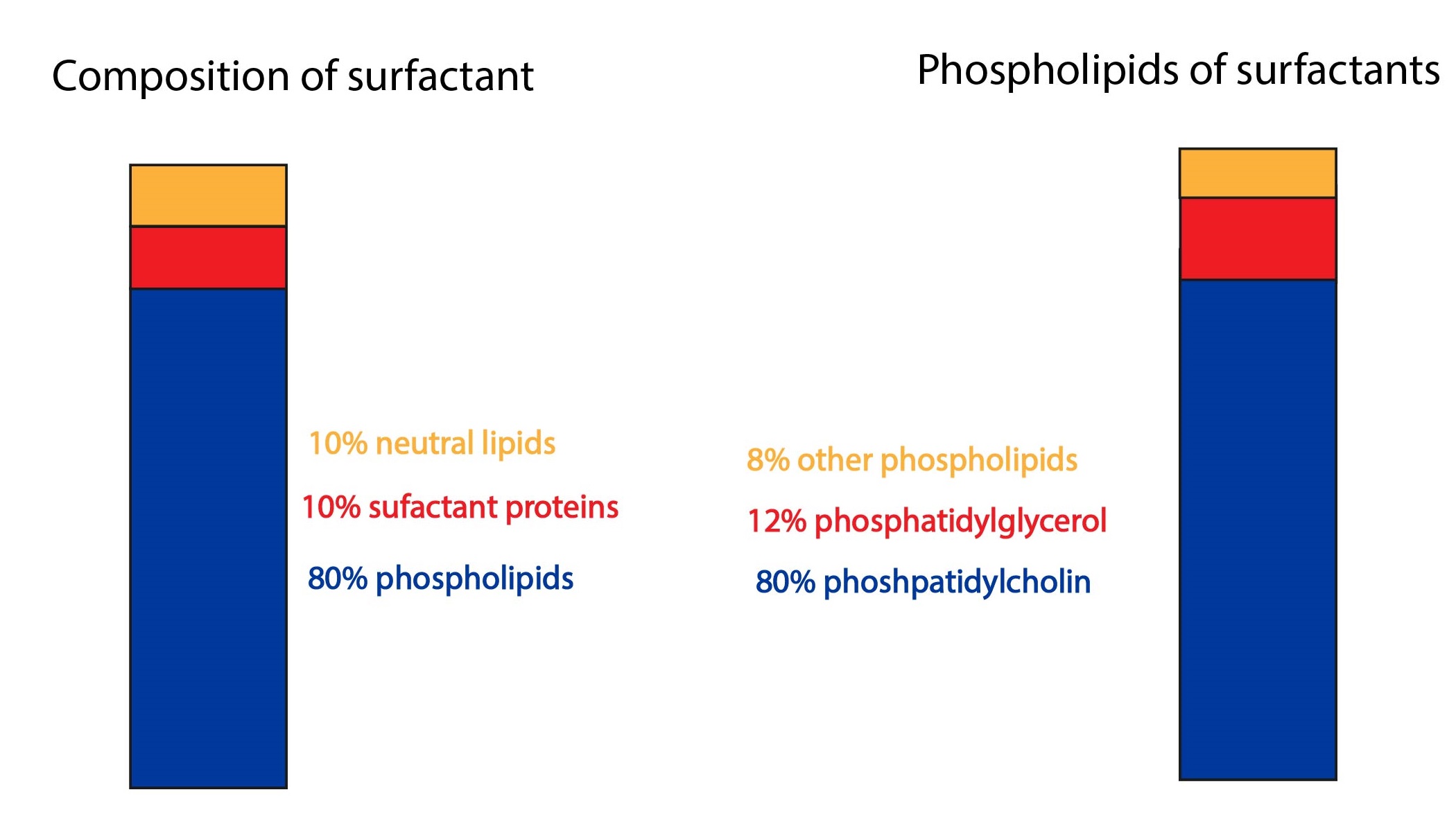 Air-blood barrier is composed of type I pneumocyte, basal membrane and endothelial cell lining the capillary. Functionally, it is the most important structure in the alveolar septum. This barrier enables the gas exchange. The oxygen molecules diffuse from alveoli to the blood and carbon dioxide in the opposite direction. 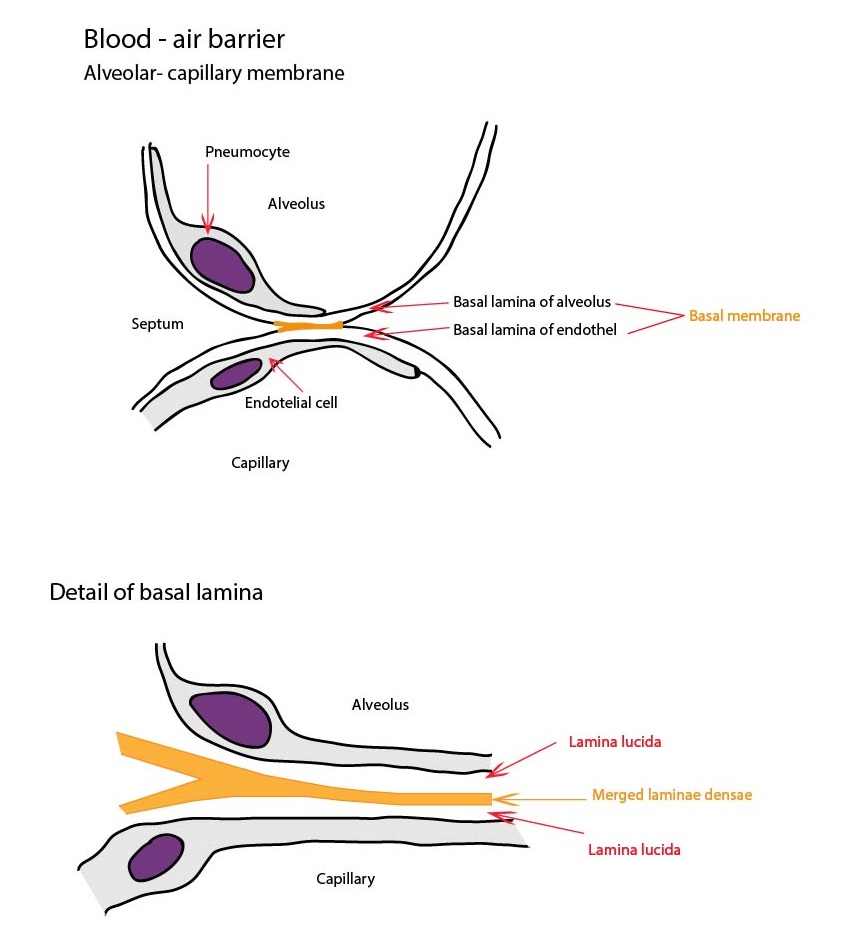 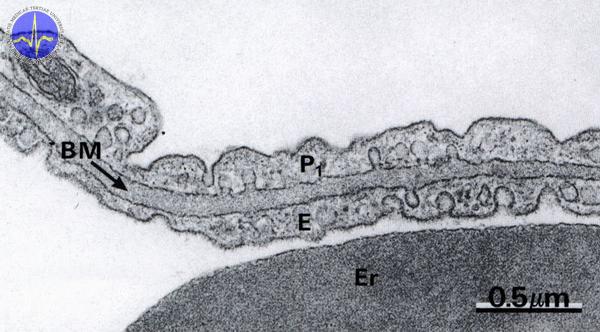 Electron micrograph of air-blood barrier composed of basal membrane (BM), type I pneumocyte (P1) and endothelial cell (E). The large dark structure in the inferior part of micrograph is erythrocyte in capillary.

Pleura consists of two serous membranes – parietal and visceral. Both membranes are formed by connective tissue layer containing collagenous and elastic fibers. This layer is covered by mesothelium. Between visceral and parietal membranes, the pleural cavity occurs. Pleural cavity contains small amount of fluid which facilitates movements during respiration.