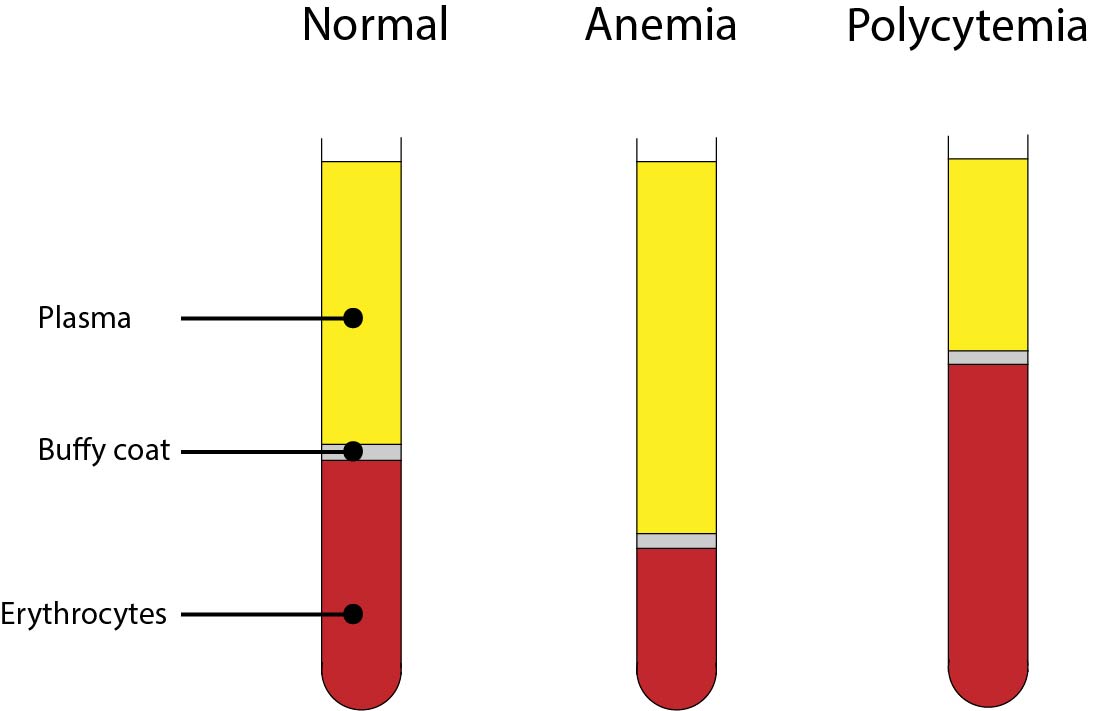 All formed blood elements are derived from common pluripotential stem cell. The one half of cells remain in the bone marrow utilized for formation of another cells by cell division. The second half of cells differentiates into corresponding blood elements.

Thrombocytes develop as a fragments of cytoplasm separated from matured megakaryocyte. The megakaryocyte is a cell measuring about 35-150 μm in diameter which contains numerous rough endoplasmic reticulum. Megakaryocyte is divided into thrombocytes by invagination of the plasma membrane. 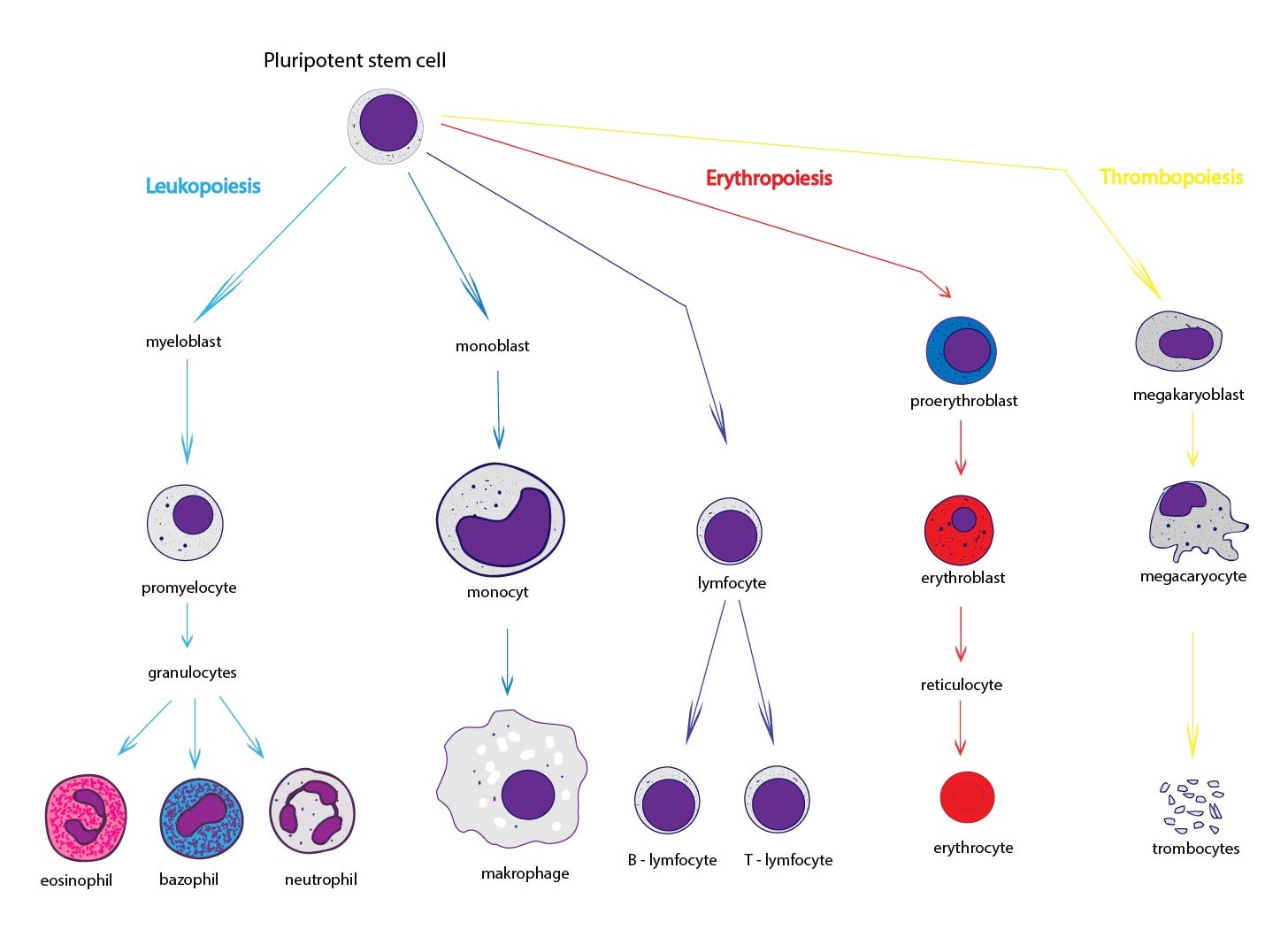 Unique biconcave shape and flexibility of erythrocyte are provided by fibrillar proteins spectrin and ankyrin, both involved in group of peripheral membrane proteins (connected to inner site of plasma membrane). At first α- and β-chain of  spectrin forms dimers and then tetramers binding to the actin molecule. Thus, on the inner site of erythrocyte plasma membrane is formed some kind of „scaffold“.

Any defect in the structure of these membrane proteins lead to many diseases – e.g. hereditary spherocytosis (defect in genes coding spectrin results in spherical erythrocytes) or hereditary elliptocytosis (ellipse-shaped erythrocytes). Both conditions lead to decreased resistance of erythrocytes and hemolytic anemia.

Mature red blood cells do not contain any cell organelles necessary for synthesis of hemoglobin. Adult type of hemoglobin (Hb A1) is a protein composed of two α- and two β-polypeptide chains and four heme molecules containing iron ions (Fe2+). Oxyhemoglobin is hemoglobin with oxygen, carbaminohemoglobin contains carbon dioxide. The highest affinity to hemoglobin has carbon monoxide – derivative is called carboxyhemoglobin. For more information about the metabolism of hemoglobin, see Subchapter 6/4.

The main source of ATP for erythrocytes is glucose. It enters them by facilitated diffusion independent of the insulin level in the blood. Glucose is metabolized by the process of anaerobic glycolysis, one molecule of glucose gives 2 molecules of ATP. Ion transfer (e.g. Na+/K+-ATPase) consumes majority of ATP in erythrocytes. Some glucose molecules are used for formation of 2,3-bisphosphoglycerate (2,3-BPG) that is generated by 2,3-BPG shunt. It bypasses the reaction in glycolysis catalyzed by phosphoglycerate kinase. Normal glycolysis generates in this step one ATP molecule, 2,3-BPG shunt thus decreases energy production in erythrocytes.

7-12% glucose molecules are not metabolized in glycolysis, but enter the pentose phosphate pathway that produces NADPH. These cofactors can be used for protection against reactive oxygen species or for maintaining the iron in hemoglobin oxidation state +II. One example is enzyme glutathione peroxidase (GPx) that reduces H2O2 to water (consumption of reduced glutathione):

Some enzyme defects lead to a hemolytic anemia. One example is a defect of glucose-6-phosphate dehydrogenase (fauvism) or pyruvate kinase deficiency. Deficiency of glucose-6-phosphate dehydrogenase is considered to be the most common enzyme defect – about 400 million people is affected (mostly in Africa, Mediterranean Basin, Middle East and Asia).

The life span of erythrocyte is approximately 120 days. With time, they become less flexible, deformed and subsequently, they are degraded by splenic macrophages.

Neutrophils represent 60 to 70% of circulating leukocytes. In blood circulation, they are present 6-12 hours but in tissues 4-5 days. Transfer from the blood to the tissue is provided by superficial adhesion molecules also called integrins which help neutrophils to adhere to the vessel wall (endothelium). Main function is phagocytosis and so, neutrophils are called the microphages. The phagosome containing absorbed foreign substances merges with lysosomes and forms phagolysosome. 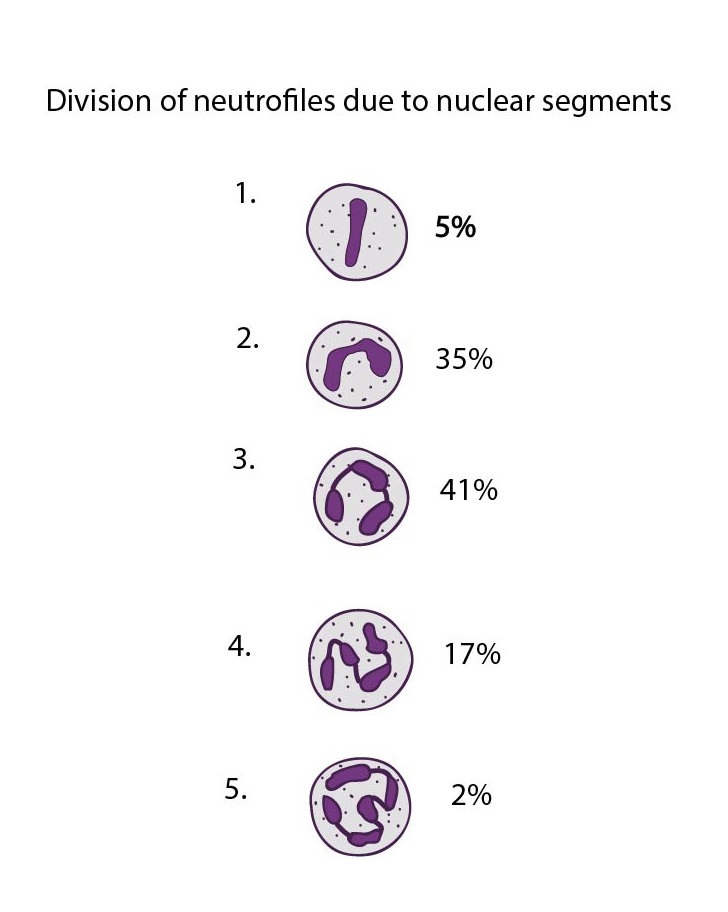 Excessive activity of neutrophils can cause the damage of organism and thus, they are inhibited by protease inhibitors – e.g. a1-antitrypsin, a1-antichymotrypsin or a2-macroglobulin.

Metabolism of neutrophils is dependent on glucose molecules. They use it as a source of ATP (e.g. glycolysis) or as a source of NADPH (pentose cycle). Effective neutrophils function requires an activation that increases their consumption of oxygen and glucose (respiratory burst). Enzymatic apparatus (NADPH-oxidase, superoxide dismutase, etc.) ensures formation of reactive oxygen species (e.g. superoxide and hydroxyl radical). Other important enzyme is the myeloperoxidase that catalyzes formation of reactive hypochlorites (ClO–) from H2O2 a Cl–. Hypochlorites are strong oxidizing agents, thus helping to kill phagocytosed bacteria. 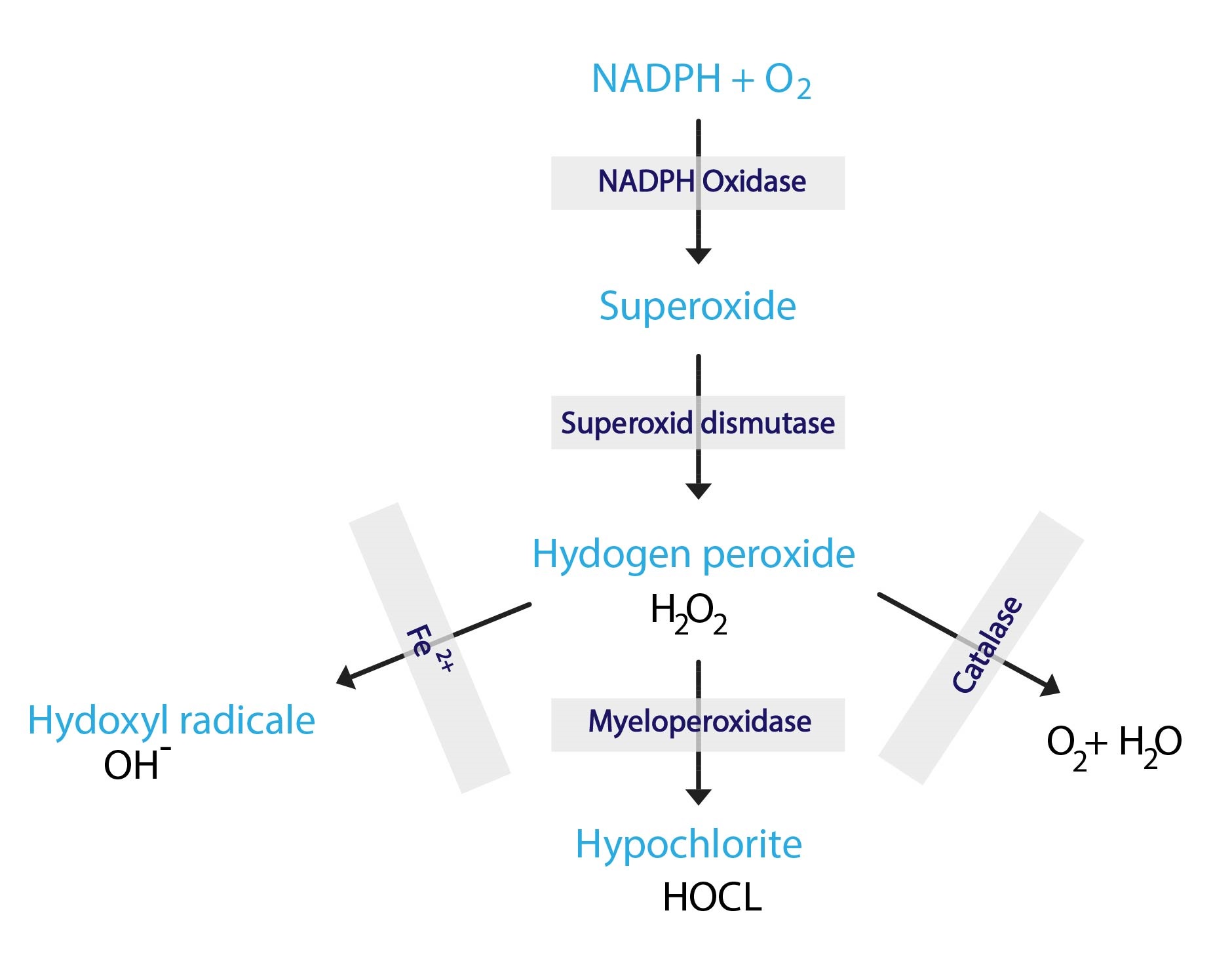 In addition to reactive oxygen species, neutrophils can generate reactive nitrogen species – such as nitric oxide (NO). NO is produced from arginine by nitric oxide synthase (NOS). 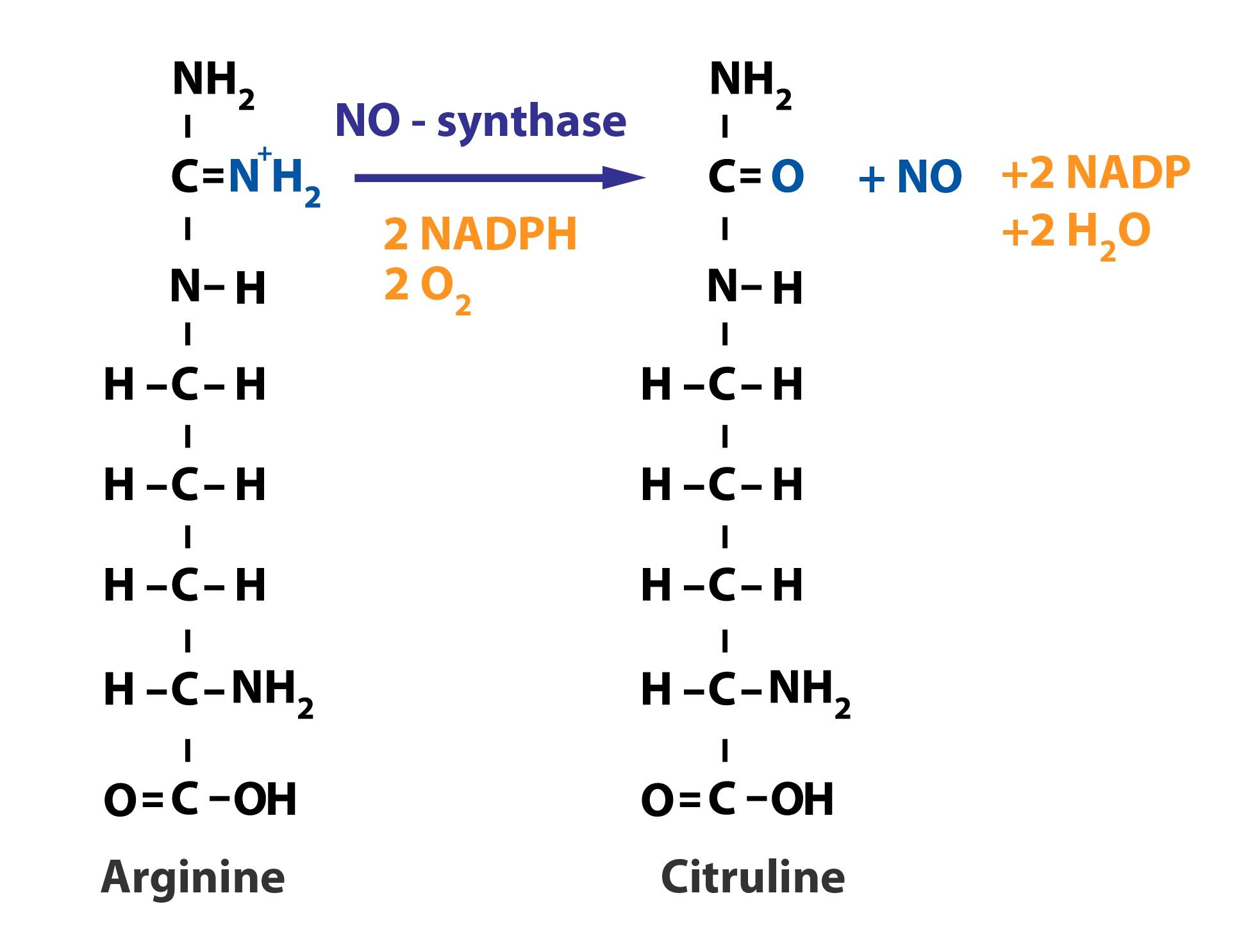 Eosinophils represent about 2-4 % of leukocytes. They number in peripheral blood varies during day. They contain segmented bilobed nuclei and specific granules. They are capable of phagocytosis but less than neutrophils. Their number increases during parasitic and allergic conditions. 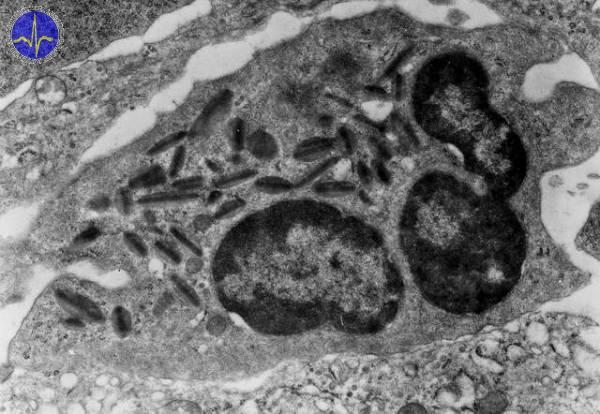 Basophils represent about 1 % of leukocytes. They contain specific granules in cytoplasm and irregularly segmented nuclei. Granules contain histamine and heparin. Histamine is produced by histidine decarboxylation (thus, it is biogenic amine). Rapid release of granule content (degranulation) can lead to anaphylactic shock 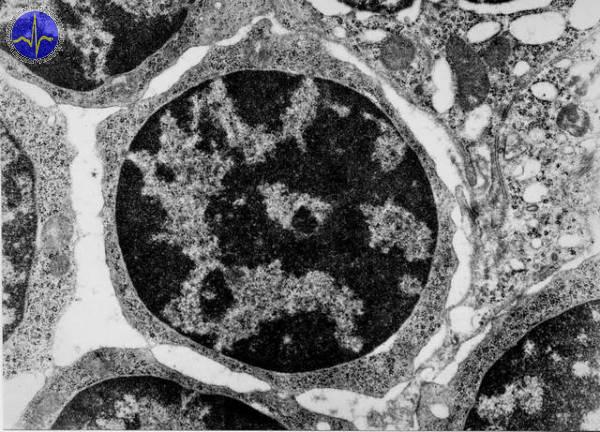 Monocytes represent 3-8 % of total count of leukocytes. Circulating monocytes are precursors of cells from monocyte-macrophage system. In connective tissue, they differentiate into macrophages. Similar to the neutrophils, even monocytes are professional phagocytes.

Thrombocytes are fragments of megakaryocytes derived in bone marrow. Decreased count of platelets is called thrombocytopenia, increased count is called thrombocytosis. Two thirds of their amount circulate in peripheral blood and one third is localized in spleen. Platelets contain dense granules and lysosomes with enzymes. Thrombocytes are involved in coagulation process. For more details see Subchapter 5/4.

There is about 30 important antigens and hundreds of unimportant ones on the erythrocyte membrane. Karl Landsteiner examined frequent deaths following blood transfusions in the 20th century. He found out three blood types: A, B and C. Due to this discovery he received the Nobel prize. Landsteiner stated, that patient has to receive a blood transfusion of the same type as his is or death follows. Today we know, there is a reaction of immune system that attack erythrocytes with unknown antigens. Immune system treats them as a potential threat.

US medical committee recognized czech psychiatrist Jan Jánský as discoverer of blood types in 1920s. He described them later than Landsteiner, but found out four of them. He named them I, II, III, IV.

AB0 system is the longest known and most important blood type system. There are two antigens A and B, which are expressed on the erythrocyte membrane. These antigens are also called agglutinogens, according to their ability to agglutinate erythrocytes if certain antibody is present. Chemically taken, agglutinogens are glycolipids. Saccharide part determinate blood type.

Individuals differ genetically by gene in a 9th chromosome. This gene codes an enzyme, catalyzing synthesis of a terminal saccharide part. Allele A and allele B are codominant. Thus transferase A and transferase B can exist together. A recessive allele H exists as well.

So there are four options:

In european population blood types are distributed as following:

Blood type AB – 6 % of the population 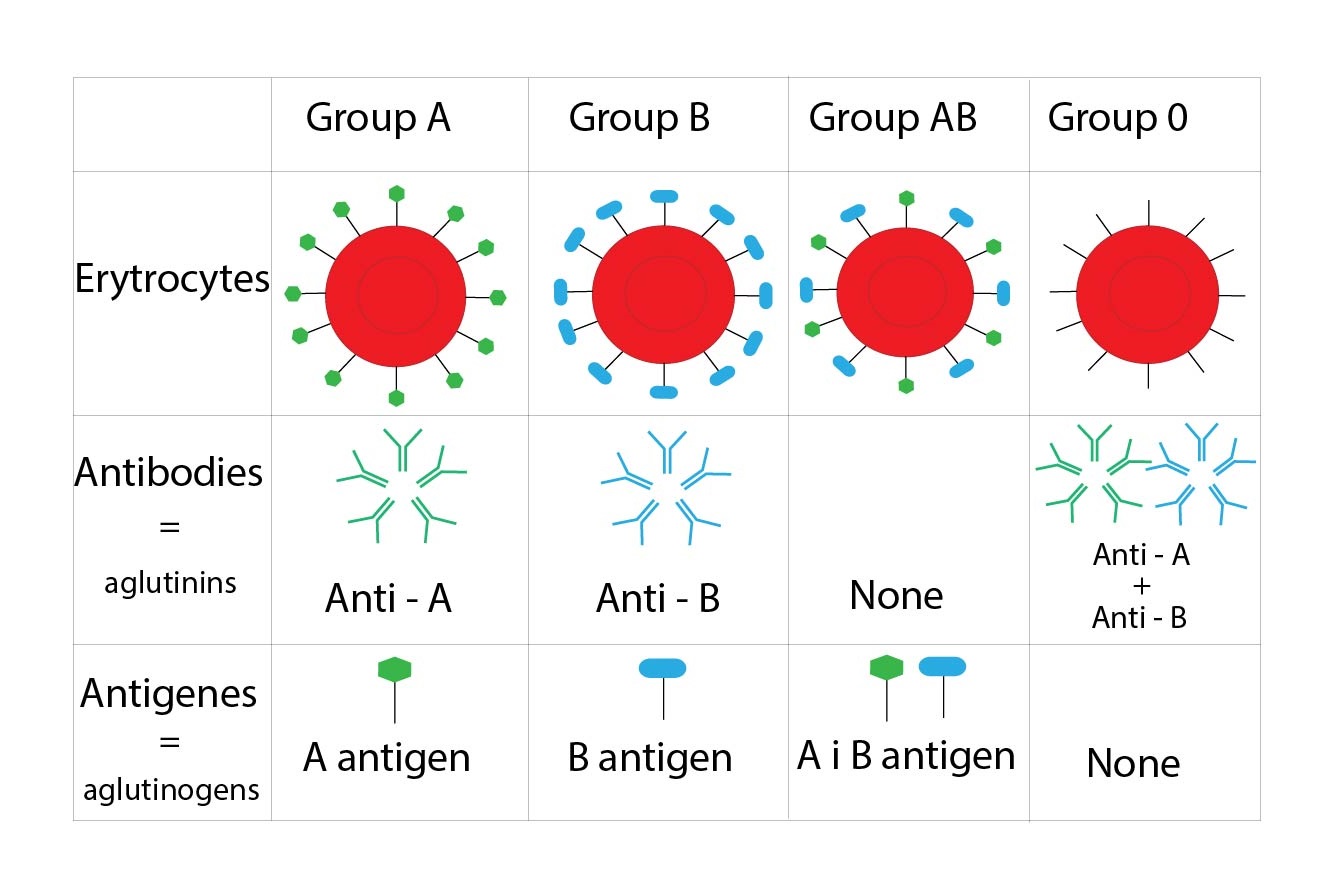 According to these characteristics, an individual with blood type AB was considered an universal acceptor. Individual with blood type 0 was considered an universal donor. But this praxis was abandoned, because expression of erythrocyte antigens is much more complicated than was previously thought. Concepts of universal donor or acceptor is totally unacceptable today.

The Rh in the name of Rh system is derived from Macaque rhesus. It is a system of antigens expressed on the erythrocyte membrane.

Rh system genes can be found in the short arm of the 1st chromosome. Their alleles are highly polymorphic. It is known up to 40 different alleles. Most important alleles are known as C, D, E, c, d, e.  They are coded by three allelic pairs, which are mutually dominant.

In health care, antigen D is commonly examined. According to presence of antigen D, Rh positivity or negativity is stated. 85 % of population is Rh positive.

Rh system differs from AB0 system in presence of antibodies. In AB0 system agglutinins are so called natural antibodies. This means that they are already presented in newborns. On the other hand, Anti-D antibodies are found in blood plasma of Rh negative individuals only if they were exposed to Rh+ blood. Thus, they are called reactive antibodies.

This situation is common in Rh- pregnant women, carrying a Rh+ fetus. If the fetus is Rh+, mother organism starts to produce Anti-D antibodies. Production of antibodies is induced during the delivery, because fetal blood mixes with the mother’s. It can be also induced by abortions of Rh+ fetus.

In sequent gravidities anti-D antibodies attack Rh+ erythrocytes in fetal blood. Anti-D antibodies are capable of passing through placenta, as well as any other antibody from IgG class. Attacked erythrocytes lyse and release hemoglobin. Hemoglobin is metabolized and bilirubin is created. Increase in bilirubin concentration leads to icterus. If the concentration surpasses certain threshold it starts to precipitate in the brain. This leads to an irreversible brain damage. Most Rh+ fetus die due to severe anemia, some of them in utero. This phenomena are collectively called hemolytic newborn disease.

It can be prevented by administration of certain antibodies.