1. Introduction to the Autonomic Nervous System

2. Arrangement of the Sympathetic and Parasympathetic Nervous System

3. Functions of the Autonomic Nervous System

Introduction to the Autonomic Nervous System

These regulations occur promptly. For example, change in ANS activity will result in a doubling of heart rate or blood pressure within seconds.

Centers controlling visceral nerves are located in the spinal cord, brainstem and hypothalamus. The limbic system is superior to large part of these centers and launches some visceral manifestations of emotional reactions. Therefore, we can have a „lump in the throat“ or  sweaty hands under stress.

The basic functional unit of ANS is called visceral reflex. It has (like motor reflex) receptor, centripetal (afferent) pathway, center of the reflex, centrifugal (efferent) pathway, and effector.

A subconscious sensory signal noticed by the receptor in an innervated organ enters via the afferent fibers to the relevant reflex center in the autonomic ganglia, the brain stem or the hypothalamus. Here, the information is processed and the center sends a response via the efferent nerves to the effector, usually back into the innervated organ, where an adequate response takes place.

Already at the beginning it is good to remember that visceral reflex rather regulates the relative activity of these two divisions. Increased sympathetic activity mostly means a reduction in parasympathetic activity and vice versa. These systems are dependent on each other and intertwined.

Arrangement of the Sympathetic and Parasympathetic Nervous System 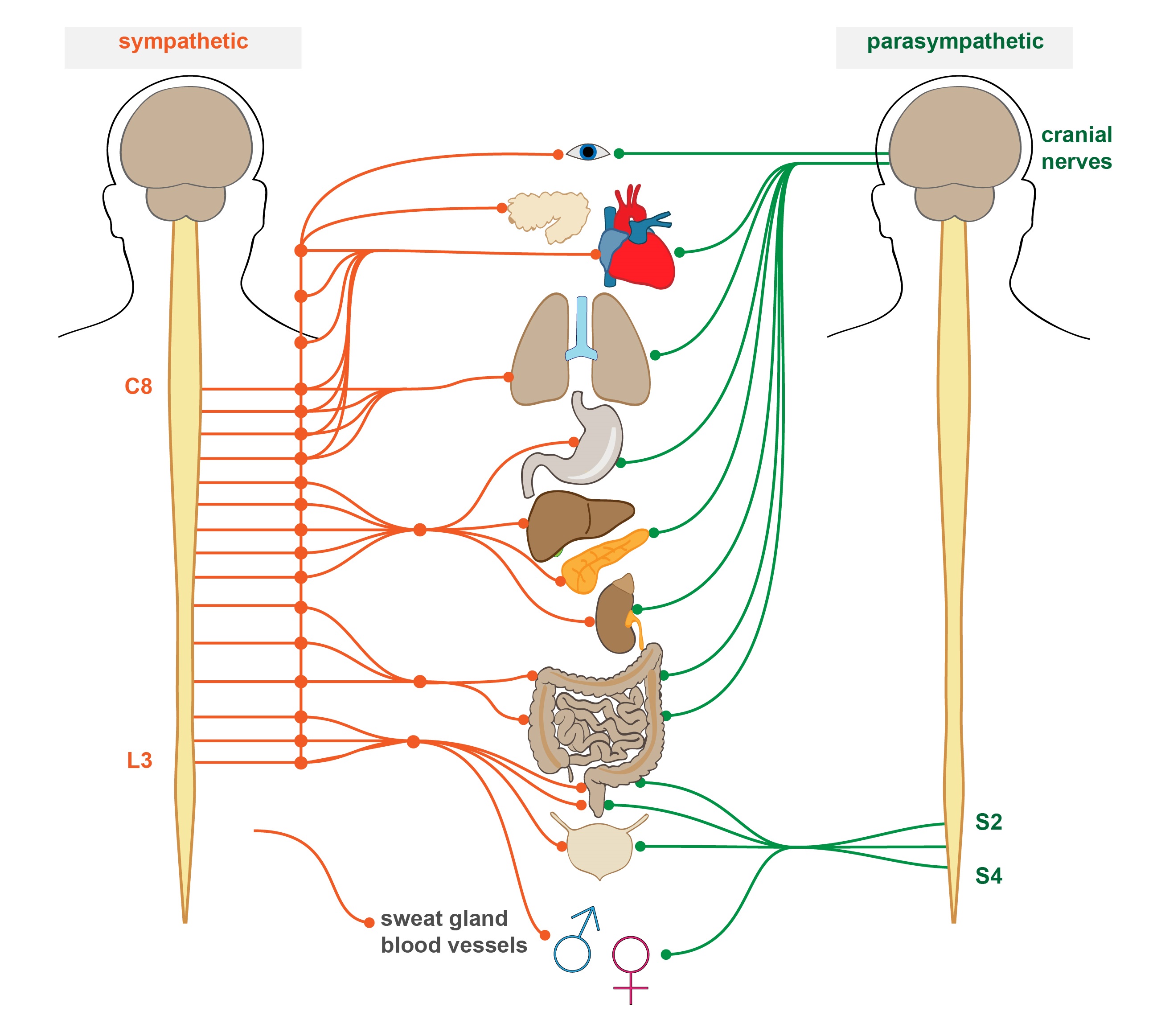 Sympathetic fibers have their reflex centers in the spinal cord, in segments T1 to L2, so the sympathetic nervous system is sometimes called thoracolumbar division.

These first neurons originate in the spinal cord and after a few centimeters realign in the paravertebral sympathetic chain of ganglia, from which the efferent fibers run towards tissues and organs. This also means that each efferent sympathetic fiber is composed of two neurons – first one preganglionic and second one postganglionic.

The cell bodies of the preganglionic neurons are located in the intermediolateral column of the spinal cord and join respective spinal nerve in the anterior column. Immediately after leaving the spinal canal, the sympathetic fibers pass through a white rami communicantes and enter the sympathetic ganglia.

Then comes one of the three following ways:

1) Preganglionic neuron is here connected to the postganglionic one

2) Axon of the preganglionic neuron continues upward or downward to distant ganglia, in which it is connected

3) Leaves the sympathetic chain without connecting and continues to the peripheral sympathetic ganglia, where it finally connects (rare option)

Typically, long postganglionic sympathetic fibers lead from the sympathetic chain to the target organ where they are terminated with bulbous enlargements called varicosities. This modified axon endings release a neurotransmitter (in the case of sympathetic nervous system norepinephrine) into its surroundings.

Varicosities can be thought of as a series of small beads strung on a string, each axon has a relatively high number of these endings. Unlike common axonal endings, the varicosities have  no postsynaptic terminal assigned. However, they are similar to conventional synapses regarding their molecular equipment, or regarding the molecular biological machinery for exocytosis. There is both an active zone with vesicles and mitochondria and SNARE proteins .

Some of the postsynaptic nerve fibers emerge from the sympathetic ganglia through the grey rami communicantes and join the innervation of skeletal muscles, with which the fibers are brought into the periphery. There these sympathetic fibers innervate blood vessels, sweat glands and piloerector muscles.

Parasympathetic reflex centers are associated with the nuclei of cranial nerves III, VII, IX and X and with spinal segments S2 and S3 (variably also S1 and S4). Therefore, the parasympathetic division of the ANS is sometimes called the craniosacral division. About 75 % of parasympathetic  fibers are brought with the vagus nerve.

Also interesting is the very concept of „intramural ganglion“. The term ganglion is in this case misleading since postganglionic neurons are often placed rather diffusely in the wall of the organ than in a discrete ganglia. 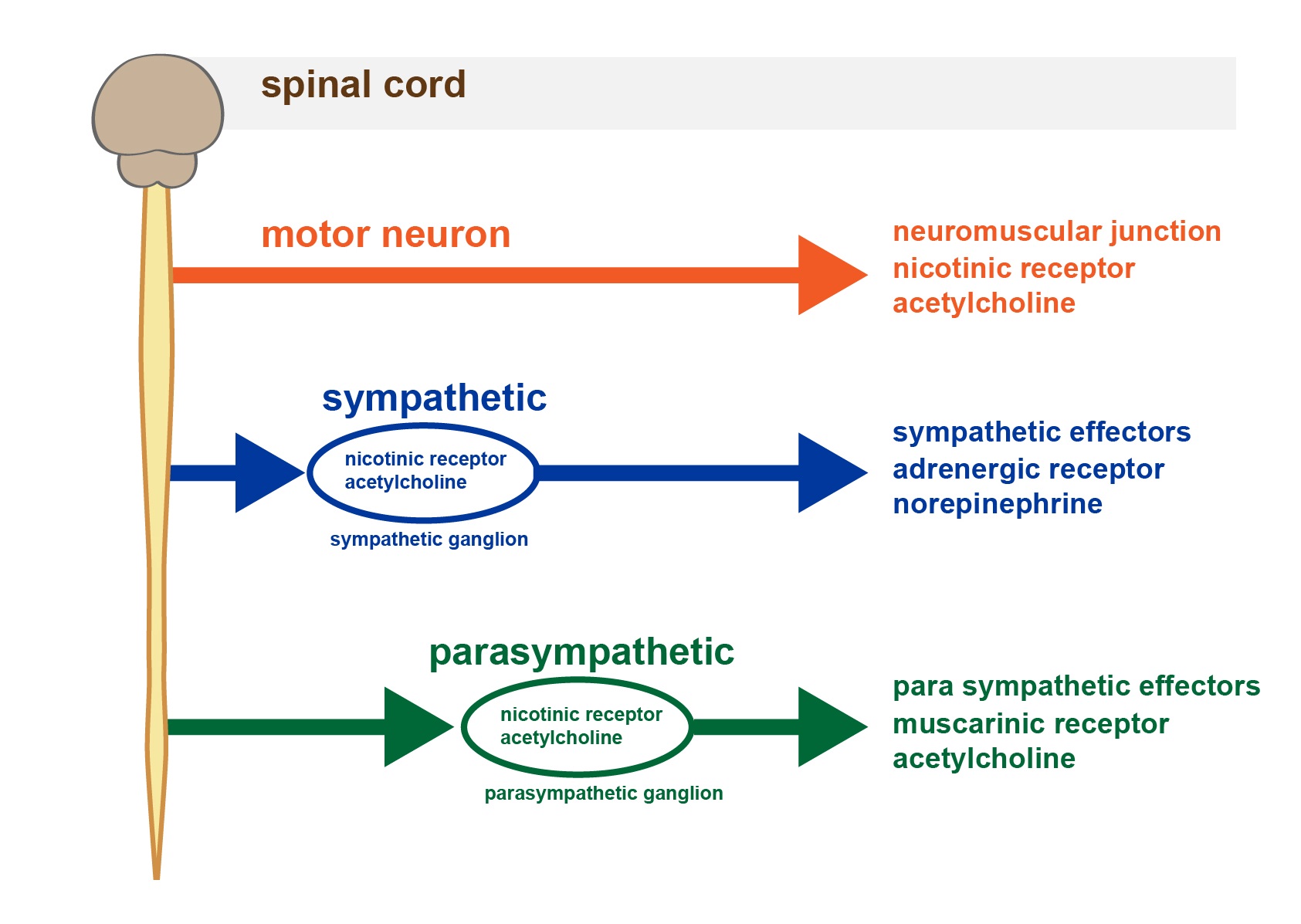 For details about the synthesis and chemical properties of both neurotransmitters, see Subchapter 12/4.

Functions of the Autonomic Nervous System

Excitatory effects of acetylcholine in the ANS are mediated by two types of receptor:

These receptors are coupled with G-protein and control the ion channels. Muscarinic receptors can be found in all effector cells innervated by postganglionic cholinergic fiber. So far, five types of muscarinic receptors were discovered – M1 to M5. The M4 and M5 receptors are not yet well described, therefore we will omit these ones in the following text.

a) M1 receptors, called „neuronal“, are mainly in the central nervous system. It is a type of receptor that via Gq-protein reduces the membrane permeability to potassium ions. This leads to depolarization of the membrane. It is considered that their dysfunction or reduction of their density is one of the causes of dementia.

b) M2 receptors, called „cardiac“, can be found on membranes of cardiac muscle cells. Via Gi– protein (resulting in reduced intracellular cAMP concentration) open channels for potassium ions and cause hyperpolarization of the membrane. This is the mechanism how the vagus nerve decreases heart rate (reduces the frequency of pacemaker discharges in the SA node) and decreases conduction velocity (slows conduction from the atria to the ventricles through the AV node).

c) M3 receptors are located particularly in glands and smooth muscle cells and mediate parasympathetic stimulation of glandular secretion and smooth muscle contraction in the digestive tract (and other organs). These receptors are coupled to Gq-protein and through phospholipase C (catalyses the formation of IP3 and DAG) increase the intracellular calcium concentration. 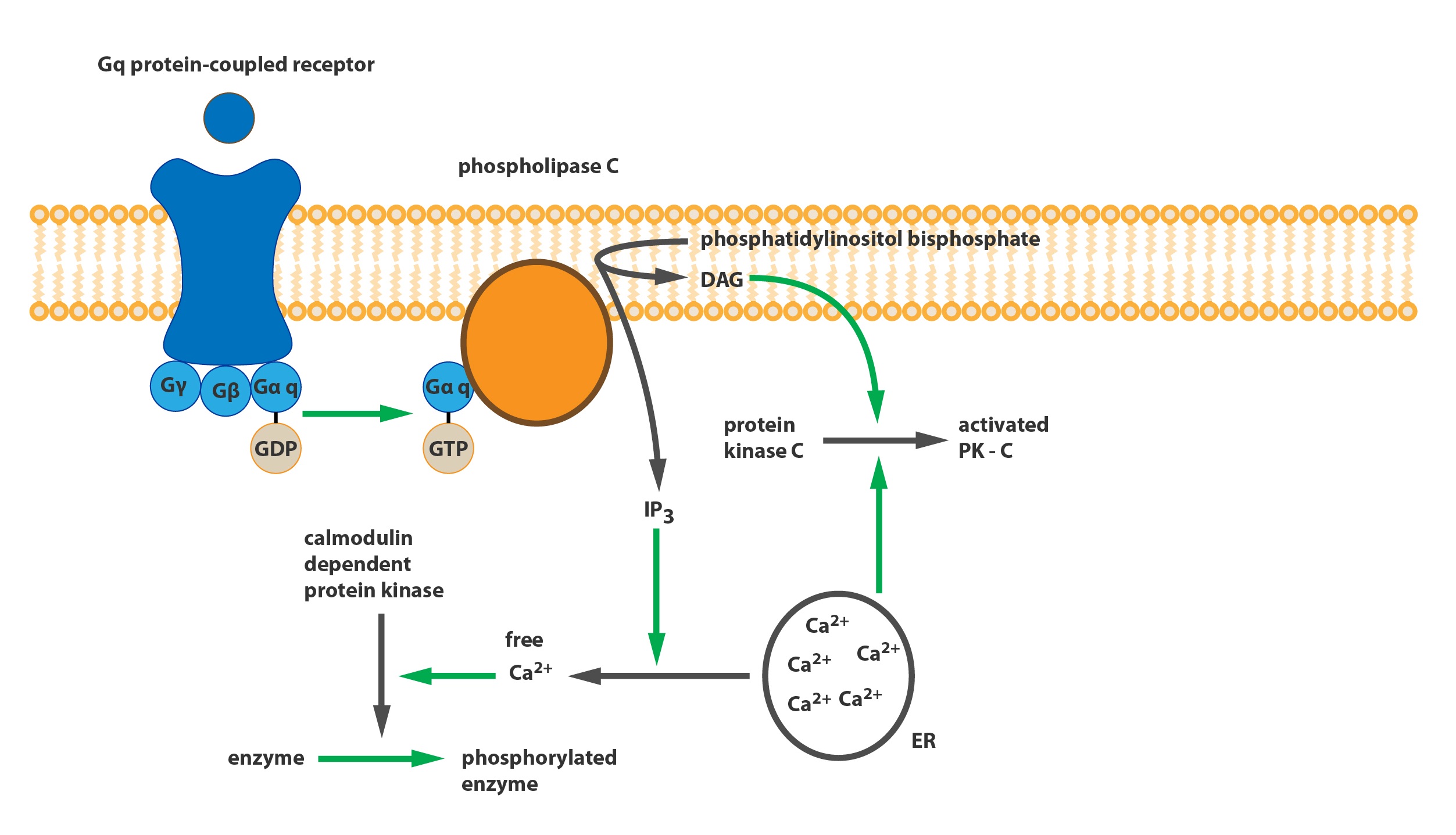 Nicotinic receptors are basically ligand-controlled cation channels permeable especially for sodium and potassium ions. Their basic classification distinguishes muscular type (NM receptor) present at the neuromuscular junction, and neuronal type (NN receptor) located in all autonomic ganglia. The latter receptors can therefore be found at the membrane of bodies and dendrites of postganglionic neurons that are innervated by preganglionic neurons.

Norepinephrine is a neurotransmitter of the ANS that is present only in postsynaptic sympathetic fibers.

The effect of noradrenaline in particular tissue is determined by presence of a certain type of receptor on the membrane of the effector cells. Currently, five major subtypes of adrenergic receptors are described: α1, α2, β1, β2, β3. The individual types differ in the affinity to their physiological ligands, epinephrine and norepinephrine.

Mediate vasoconstriction, mydriasis and contraction of the sphincters. In addition, α2-receptors inhibit further release of neurotransmitter from the varicosities, and thus act as autoreceptors. These receptors are coupled to Gq-protein.

β1 receptors are located on cardiac muscle cells and increase the heart rate. Furthermore, on adipocytes are these receptors able to potentiate the lipolysis. 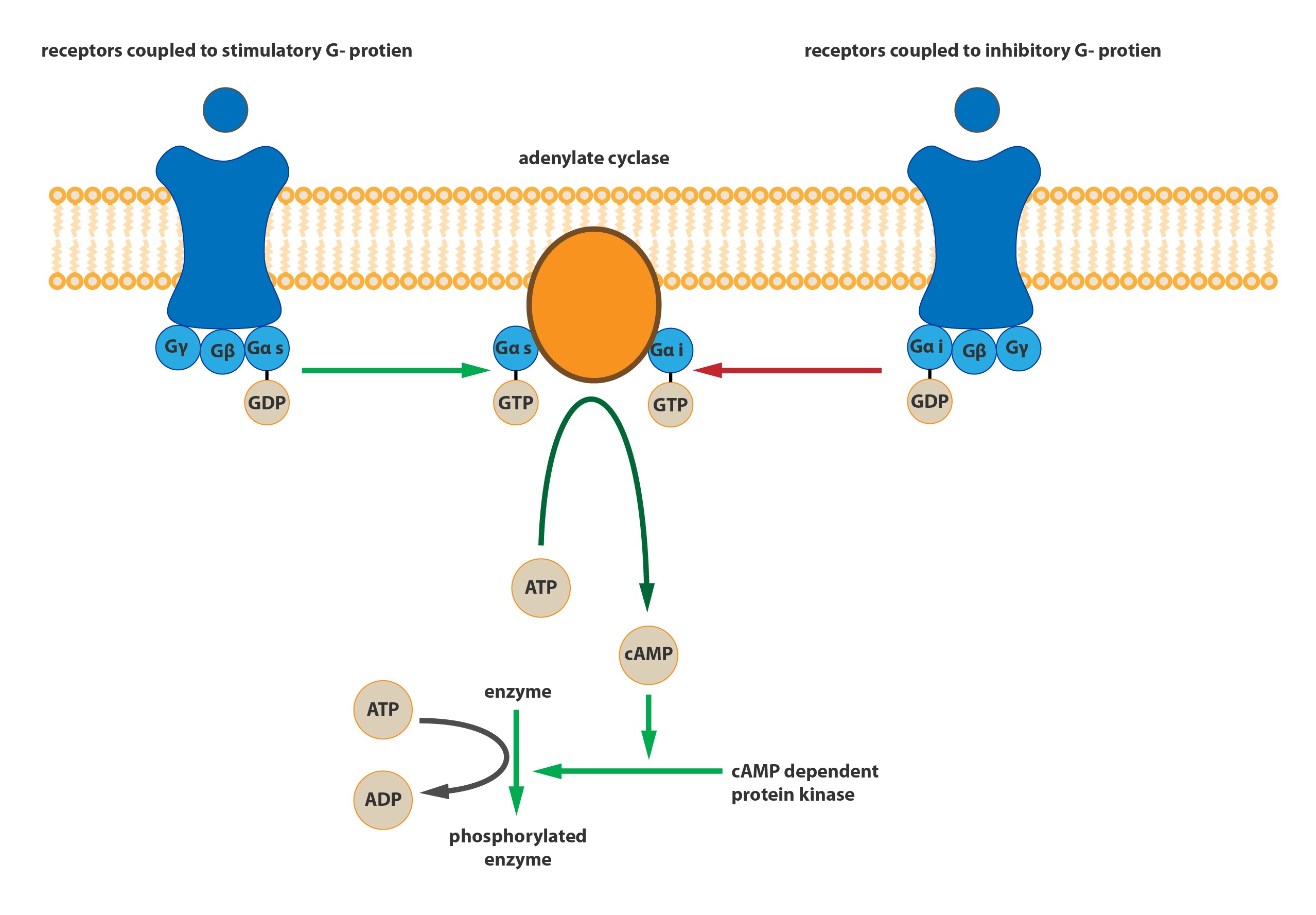 Note that stimulation by adrenergic nerve fibers causes vasoconstriction (α1-receptors), but endocrine stimulation by epinephrine has rather vasodilatory effect (β2-receptors). Nevertheless, this depends on equipment of a given blood vessel with mentioned adrenergic receptors and the predominant type of receptor.

The effects of sympathetic and parasympathetic nervous system on individual organs

Changes of activity in individual portions of ANS act on various organ systems differently. Sometimes it is possible to estimate these effects based on simple precept:

Sympathetic nervous system prepares the body for ”Fight or flight”.

Increased sympathetic tone activates the transverse fibers of the iris and causes dilation of the pupil – mydriasis. This response is consistent with the above, because during the fight or flight we need to have the widest possible visual angle.

On the contrary, increased parasympathetic tone constricts circular fibers of the iris, thereby reducing the diameter of the pupil and miosis occurs. This occurs upon activation of the parasympathetic reflex which responds to the impact of excessive amounts of light on the retina.

Lacrimal and salivary glands as well as glands of the gastrointestinal tract are stimulated by parasympathetic nervous system. The increase in parasympathetic tone usually results in increased excretion of water or increased volume of the secretions.

Increased sympathetic tone leads to vasoconstriction anywhere in the gastrointestinal tract, which naturally reduces the amount of secretion. The secreted liquid is thus more concentrated.

Apocrine glands that produce lubricating secretions and reduce friction in the armpits,  are also controlled by the sympathetic nervous system, but with usual adrenergic fibers.

Generally, the sympathetic stimulation increases cardiac output, which is accompanied by an increase in myocardial contractility and heart rate (mediated by higher pacemaker activity, excitability and conduction velocity).

Sympathetic stimulation increases both the cardiac output and peripheral resistance, since it causes vasoconstriction in the abdominal viscera. Due to these factors, there is an acute increase in blood pressure. In the long run, the pressure is not changed.

The parasympathetic nervous system decreases cardiac output though with essentially no effect on blood vessels. Therefore, its activation leads to a minor drop in blood pressure.

Physiologically, both sympathetic and parasympathetic nervous system remain constantly active. Both systems produce without stopping impulses of certain maintenance frequency to effector organs. This phenomenon is called sympathetic respectively parasympathetic tone and is similar to the principle of tonus in innervated skeletal muscles.

The difference lies in the fact that the tone of the ANS is based on low frequencies. Basal activity of the sympathetic and parasympathetic nervous system is maintained by one discharge for a few seconds. Full activation occurs at a frequency of about ten discharges per second. In the motoneurons, hundreds discharges within one second are needed for similar activity.

Physiological utility of this tone is that it allows the regulated function (or an organ) to increase or decrease the activity based on changes of the frequency of discharges. For example, the sympathetic nervous system normally keeps most of the arterioles constricted to half their maximum diameter. At elevated sympathetic tone even more powerful contraction occurs, such as to one third of the maximum diameter. On the contrary, reduction of the sympathetic tone will lead to vasodilation. If there was no tone, only vasoconstriction would come into consideration and the sympathetic nervous system would never be able to produce relative vasodilation.