1. Chemical composition of the nervous tissue

2. Energy metabolism of the CNS

Chemical composition of the nervous tissue

Nervous tissue is characterized by high lipid and protein content. It does not contain large amounts of saccharides. Complex lipids (e.g. phospholipids and sphingophospholipids) and unesterified cholesterol are the most abundant lipids. Neurons are known to be able to synthesize the longest fatty acids in the human body and the presence of very long chain FA is quite usual (often in the form of hydroxy acids). TAG are missing.

Proteins of nervous tissue have irreplaceable role as channels, transporters, receptors and neurotransmitters. The most important transporter of neuronal membrane is the Na+/K+–ATPase, responsible for a continuous maintenance of the resting membrane potential, even at the cost of a high energy consumption. It makes up 70 % of the total energy expenditure of neurons and 30 % in the case of other cells.

Energy metabolism of the CNS

Brain is at the same time the most sensitive organ to oxygen or glucose deficit. Shortage of oxygen causes unconsciousness within few tenths of seconds and the damage to neurons becomes irreversible after about 5 minutes. The rate of neuronal death depends on many factors, for example temperature. People with hypothermia have significantly reduced cellular metabolism and thus the demands for oxygen and nutrients supply decrease leading to a longer survival in their absence.

Value of the respiratory quotient of brain (RQ, calculated as a proportion of produced CO2 and consumed O2 – RQ = VCO2 / VO2) is very close to 1. This means that the brain metabolism utilizes almost exclusively saccharide sources, particularly glucose. Its daily consumption is about 120 g.

Regarding other energy sources, our brain (unlike most of the other peripheral tissues) does not utilize fatty acids. Transported in bloodstream bound to the albumin, fatty acids are unable to cross the hematoencephalic barrier. However, during a long-term starvation brain metabolism adapts to the consumption of ketone bodies (synthesized from the excess of acetyl-CoA). A full adaptation develops approximately within three weeks of starvation. After this period, the brain is able to cover up to 50% of its energy expenditure from the oxidation of ketone bodies.

The role of astrocytes

The main energy substrate of brain is glucose. It is, however consumed mainly by astrocytes. Neurons themselves utilize other substrates: primarily lactate and pyruvate. These substances are produced and released into the extracellular space by astrocytes and followed by an absorption into neurons. The production of a lactate in astrocyte is coupled with the activity of neuron.

Apart from glucose metabolism astrocytes play an important role in the recycling of glutamate (the most important excitatory neurotransmitter in CNS). Glutamate from the synaptic cleft is transported into the astrocytes through symport with sodium cations (EAAT 1 and 2 transporters). Increased concentration of Na+ in astrocyte causes an activation of Na+/K+-ATPase, which restores the electrochemical gradient necessary for transport. Astrocytes convert glutamate into glutamine and return it back to the neuron to the further utilization. Both of the above-mentioned processes require ATP. 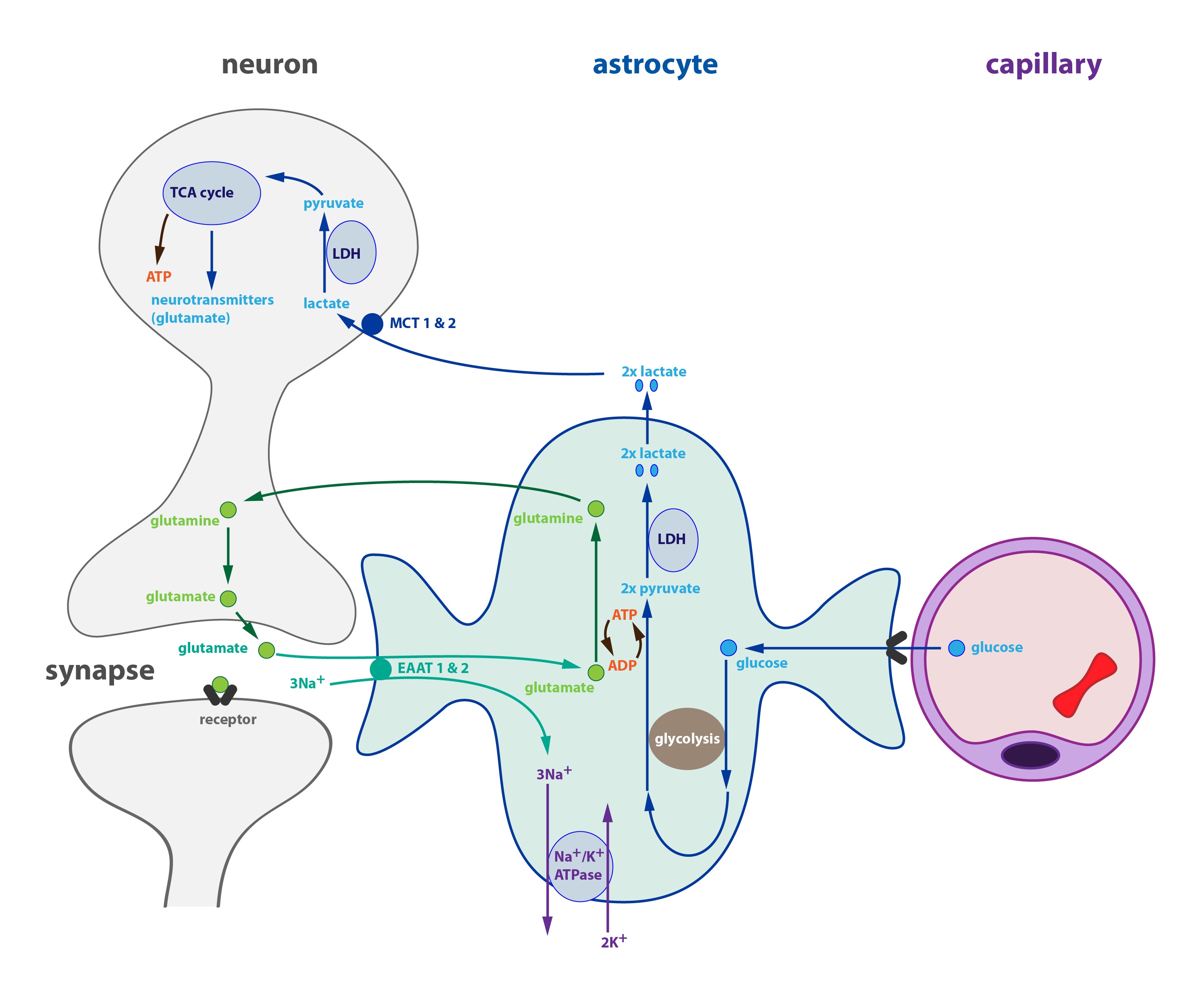 Interaction between the neurons and astrocytes works in the following way: when the activity of neuron is high (requiring large amounts of lactate), it secretes a lot of glutamate into the synaptic cleft. Increased transport of glutamate into the astrocyte activates Na+/K+-ATPase and the conversion of glutamate into glutamine. The consumption of ATP increases and its amount in astrocyte drops. This stimulates the glycolysis leading to an increase in glucose intake from the blood and ATP synthesis.  More lactate is produced the same time, which is than utilized by neurons.

Astrocytes contain small quantities of glycogen that undergo an intense metabolism (degradation and resynthesis). Glycogen acts as a short-term energy reserve (until the supply of glucose is increased).

PET (positron emission tomography) is a diagnostic imaging technique that allows the to track the presence and distribution of a radiopharmaceutical in the body. It makes use of the radionuclides emitting positrons. Positrons almost instantly annihilate with electrons resulting in a pair of photons (gamma radiation) emitted in opposite directions. These photons can be detected by a gamma-camera.

During the brain examination we use a special radionuclide that is a derivative of glucose – FDG (18F-2-deoxy-2-fluoro-D-glucose). FDG is taken up by astrocytes, but after it is phosphorylated it cannot be further metabolized. The amount of FDG in tissue thus reflects the metabolic activity (astrocytes take up more glucose when their activity is higher). PET makes it possible to image the metabolically active regions of the brain.

Metabolisms of ammonia in the CNS

Ammonia is able to freely cross the hematoencephalic barrier. If its concentration in blood increases (the upper physiological limit is around 50 μmol/l) it significantly interferes with the brain metabolism. Ammonia incorporates into α-ketoglutarate and glutamate thus stopping the Krebs cycle and causing a depletion of ATP together with accumulation of glutamine and glutamate in astrocytes. Metabolisms of both astrocytes and neurons collapse.

Excess of glutamate leads to a disruption in its transport from synaptic cleft and to so-called excitotoxic neuronal damage with an impaired neurotransmission. Excessive glutamate (that the neurons are unable to get rid of) causes a change in osmotic relationship between the inner and outer environment. The resulting influx of water leads to a brain edema (intracellular at first and later extracellular as well).

There are many conditions that may cause hyperammonemia, for example an insufficient synthesis of urea due to the damage to liver function. Especially quick (so-called fulminant) liver failure (e.g. paracetamol poisoning) leads to a set of symptoms called liver encephalopathy. They are caused by the toxicity of ammonia and according to the severity of symptoms (confusion, disorientation, agitation, unconsciousness or coma) we recognize four grades of this encephalopathy (I-IV).