In this subchapter we repeat the information about the resting membrane potential and action potential, which were discussed in Chapter 3.

These differences give rise to an electrical potential difference across cell membranes of all cells in the body. Some cells are excitable, i.e. they can rapidly change their membrane potential and use these changes to transmit signals or initiate muscle contraction.

In the human body cell membranes are permeable to several different ions. The Nernst potential is therefore too rough a simplification and we must use the more sophisticated Goldman-Hodgkin-Katz equation:

This equation is similar to the Nernst equation but multiplies ion concentration by the membrane’s permeability for them, P.

The diffusion potential on a membrane then depends on:

1) Charge carried by the ion

2) Membrane permeability for the given ion

3) Ion concentration on both sides of the membrane

The resting potential is then such a diffusion potential stable in time. Under physiologial conditions it mainly depends on sodium, potassium and chloride ions.

The resting potential on the axolemma of an alpha motor neuron is about -90 mV, the cytoplasm is thus more negative that the extracellular fluid.

The reason for this is similar to our initial example. Neuronal membranes at rest are most permeable for potassium and based on the Goldman-Hodgkin-Katz equation the ion with the highest permeability affects the potential the most.

Most cell membranes are permeable for potassium due to the presence of constitutively open so called “leak” potassium channels. Both labels are misleading as the channels are not  open all the time, rather they open and close in short intervals, and there is hardly any potassium leak at the resting potential due to the counteraction of the electric field. A dynamic equilibrium is set up so that the number of ions leaving equals the number going in.

Sodium ions cannot enter the cell through potassium channels as these contain a selectivity filter, which specifically interacts with the hydration envelope of potassium ions. Sodium ions are smaller and therefore cannot bind into the selectivity filter and lose their hydration envelope. In a hydrated state they are too large to pass through the ion pore.

Na+/K+-ATPase has a negligible effect. Although this enzyme is capable of overcoming the huge concentration gradients and electric fields (pumping 3 sodium ions out and 2 potassium ions in makes the inside more negative) its main role is in the restitution of ion concentration after an action potential.

If Na+/K+-ATPáza were completely removed the resting potential would change from about -90 mV to about -86 mV.

Action potential is a sudden change of the membrane potential, it is only found in excitable cells (nerve and muscle) and is used to encode information (as frequency and number). It is usually initiated by membrane depolarisation (e.g. from -90 mV to +35 mV) followed by the return to the original state.

The membrane at this stage has the resting membrane potential (let’s say -90 mV) and in excitable tissues a sufficiently strong stimulus can start an action potential. Sufficiently strong is a stimulus reaching the threshold potential, which in anterior horn motor neurons is between -70 and -50 mV.

A subthreshold stimulus will cause a transient depolarisation, e.g. from -90 mV to -80 mV. This change is counteracted by the Na+/K+-ATPase and the membrane potential returns to its original value.

The exact value of the threshold potential can be determined by measuring the rheobase and chronaxie.

Rheobase is the smallest stimulus that if acting indefinitely will cause an action potential. In practice a weak current is used and the infinite time is approximate by 300 ms. The amplitude is gradually increased until it initiates an action potential.

Chronaxie is the time, for which a stimulus equal to twice the rheobase must act to cause an action potential.

From the values of chronaxie and rheobase we can construct a strength-duration curve, which gives the relationship of stimulus strength and duration.

If a stimulus reaches the threshold a massive influx of positive charges quickly changes the membrane potential.

This depolarisation is mediated by voltage-gated sodium channels, which open after reaching the threshold potential. These channels have two gates: activation and inactivation. In a resting state the activation gate is closed and the inactivation gate is open. When the threshold is reached the activation gate opens and the channel becomes permeable for sodium ions. The membrane permeability for sodium thus increases up to 5000-fold and the Na+/K+-ATPase is unable to counteract the flow of ions. Within a fraction of a millisecond the membrane potential reaches positive values. 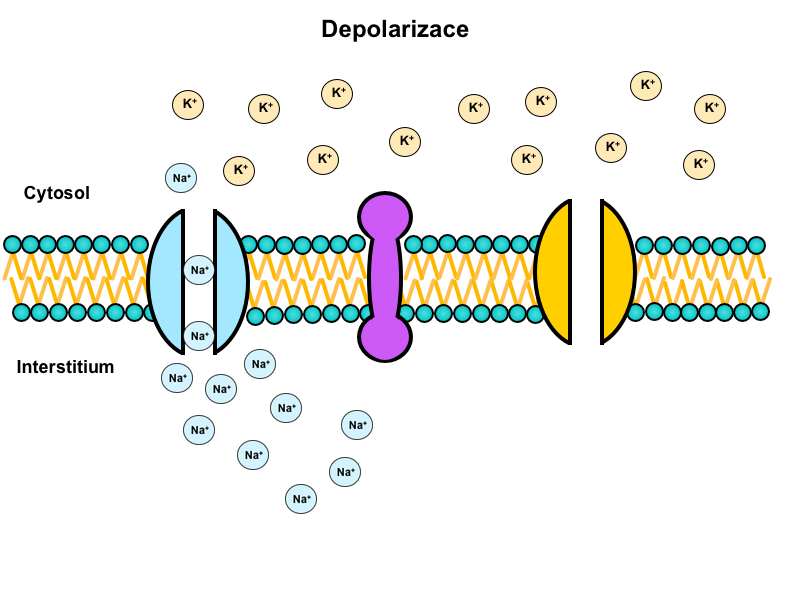 In a given cell all action potentials have the same amplitude and shape once the threshold is reached. This principle is called all or nothing.

The influx of sodium ions is stopped by the closing of the inactivation gate. A delayed conformational changes closes it within a fraction of a millisecond after the opening of the activation gate.

Interestingly, voltage-gated sodium channels open even at subthreshold potentials but their number is insufficient to overcome the homeostatic mechanisms such as the Na+/K+-ATPase. Therefore they play a role also in subthreshold depolarisations.

This is a typical characteristic of action potentials in large nerve fibres, where the initial resting potential (-90 mV) changes to positive values (+35 mV). In small fibres such as those conducting painful stimuli this overshoot is not observed and the action potential amplitude reaches to about -5 mV.

It is important to note that the amplitude does not encode any information. Only the number and frequency does.

This is the return of the membrane to its original, resting potential.

The molecular basis for repolarisation is as follows:

1) Closing of the inactivation gate of voltage-gated sodium channels

Closing of the inactivation gate of voltage-gated sodium channels

The inactivation gate doesn’t open until the membrane returns to the resting potential, therefore in the first two thirds of the repolarisation no stimulus can elicit another action potential. This is called the absolute refractory period.

These channels further increase the permeability for potassium causing a massive efflux of potassium ions thanks to the decrease of electrical forces preventing it.

This pump transports three Na+ ions to the outside in exchange for two K+ ions going inside while consuming ATP since it has to work against concentration and electrical gradients.

It is important to note that the ion exchanges described above only take place in the vicinity of the membrane. A bulk change of ion concentrations inside a neuron would require about 20 000 000 rapidly repeated action potentials.

In this state the membrane potential becomes more negative than the resting potential, i.e. instead of -90 mV it reaches -94 mV. This is mainly caused by a slow closing of voltage-gated potassium channels, which allows the potential to approach the Nernst potential for potassium as predicted by the Goldman-Hodgkin-Katz equation.

In large myelinated axons action potentials propagate by the saltatory conduction. Areas of ion conduction may be separated by up to 3 mm and new action potential only arise in nodes of Ranvier. The rest of the axon is insulated and doesn’t contain the molecular apparatus necessary for the propagation of an action potential (sodium and potassium channels, Na+/K+-ATPase). 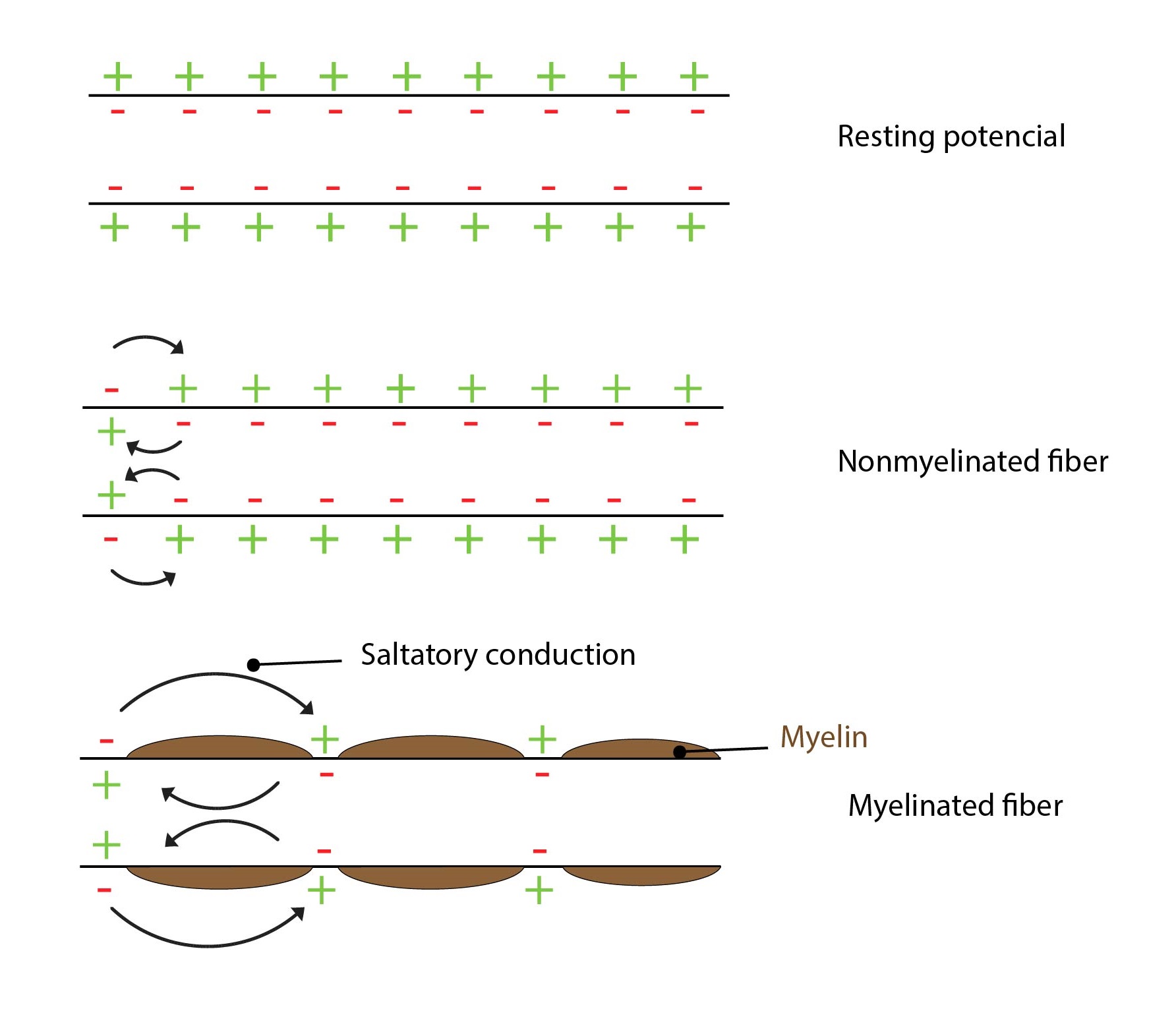 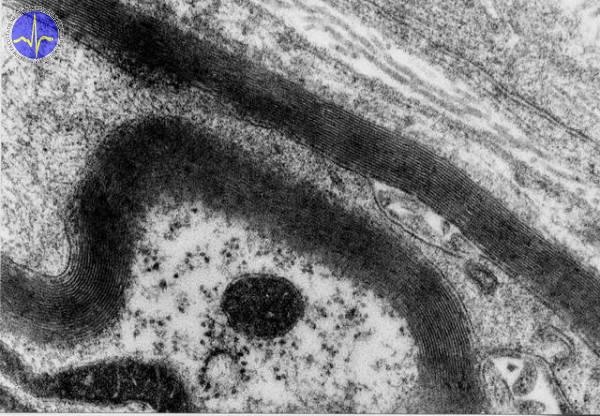