1. Formation and function of the cerebrospinal fluid

2. Composition of the cerebrospinal fluid

Formation and function of the cerebrospinal fluid

The total volume of cerebrospinal fluid is approximately 150 ml and it is produced at a rate of 450 ml per day (thus replacing itself three times a day). Liquor is synthesized through two processes. Secretion (producing around 50 to 70% of the volume) occurs in the cells of the choroid plexus and ventricular ependyma. The rest of the fluid is synthesized by the ultrafiltration of blood plasma through choroidal capillaries. 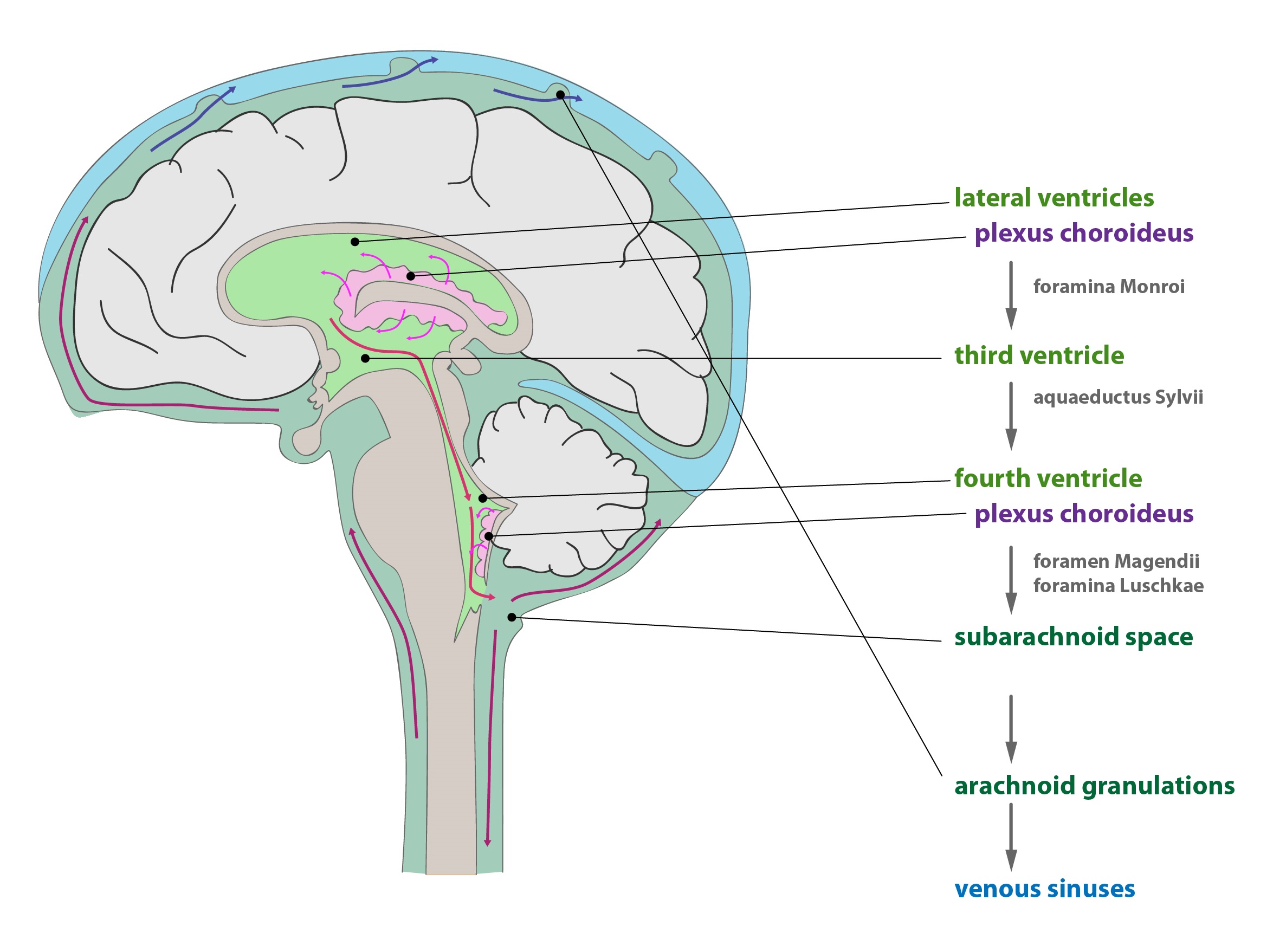 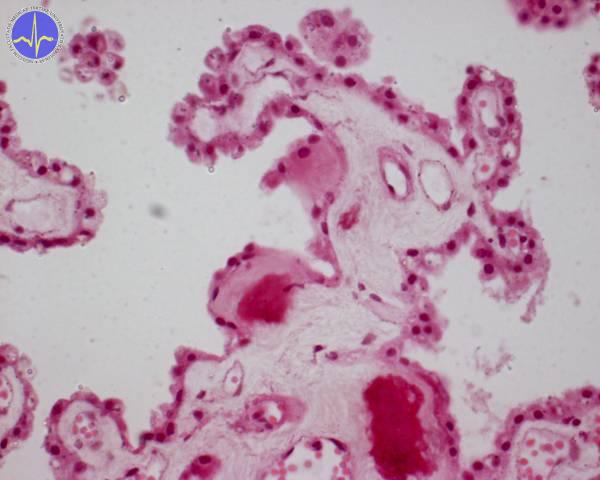 CSF circulates from the lateral ventricles through interventricular foramina (foramina of Monro) into the third ventricle. Mesencephalic duct (aqueduct of Sylvius) connects the third and fourth ventricle and the liquor flows further into the subarachnoid space by means of three foramina: single median aperture (foramen of Magendie) and a pair of lateral apertures (foramen of Luschka). Liquor located in the subarachnoid space surrounds the brain and spinal cord. Portion of liquor leaves the fourth ventricle to enter the central canal of the spinal cord.

The resorption of liquor takes place in the arachnoid granulations (arachnoid villi, Pacchioni’s granulations). These are the protrusions of the arachnoid through the dura mater, projecting further into the intracranial venous sinuses enabling the flow of liquor back to the blood circulation.

The brain is essentially fully immersed in the cerebrospinal liquid causing a reduction of is real weight (around 1500g) to an equivalent of about 25 g. This mechanism protects the brain against the damage caused by its own weight.

CSF acts as a shock absorber, protects the brain from a sudden pressure or temperature changes and the components of the immune system present in the fluid (leukocytes, immunoglobulins etc.) provide a protection against various pathogens as well.

Liquor helps to maintain the correct composition of the environment surrounding nervous tissue cells (homeostasis). It also partially provides the supply of nutrients and disposal of the metabolic waste products and forms a medium through which a diffusion of a various signal molecules (like neurotransmitters) takes place.

It is important to realize that the volume of all tissues and fluids within the skull is limited by the volume of their bone container. Monroe-Kelly’s doctrine says that the intracranial space volume remains constant and its individual components (blood, cerebrospinal fluid and the nervous tissue) exist in a state of volume equilibrium. Any increase in the volume of one of the component (caused for example by an intracranial bleeding, hydrocephalus or tumor growth) is compensated by a reduction in the volume of other components. CSF acts within this system partially as a buffer (though not having a large capacity) – it is the first system to compensate the increase in volume of the other two compartments. Brain circulation can act in a similar way but to a much lesser extent, because a restriction in blood supply increases a risk of a hypoxic damage to the brain tissue.

Composition of the cerebrospinal fluid

The basic test performed to measure the concentrations of components of the CSF is its puncture. It is usually performed in the lumbar region (between L4 and L5) or, in rare instances through suboccipital puncture. Four samples (each of approximately 2 ml) are collected:

During the sample collection we can measure the pressure of the cerebrospinal fluid as well. The value in the case of lumbar puncture in patient lying on side is approximately 8-15 mmHg (10-18 cm H2O) or in the case of sitting patient around 16-24 mmHg (20-30 cm H2O).

Physiological findings are summarized in the following tables:

Many diseases of CNS can cause changes in the composition and concentrations of individual components of cerebrospinal fluid. Testing the CSF thus plays an important role in the differential diagnostics and confirmation of a particular diagnosis.

The most common causes of changes in the composition of cerebrospinal fluid are various kinds of meningitis:

Some of the degenerative disorders (for example multiple sclerosis – MS or sclerosis multiplex) are characterized by a presence of so-called oligoclonal bands. They are distinct bands of proteins (or their fragments) visible on electrophoresis, which represent various kinds of antibodies produced by plasma cells.

Hematologic malignancies can cause an infiltration of fluid by tumor cells (e.g. leukemic) revealed during cytological examination.

The term blood-brain barrier denotes the barrier separating the brain tissue from the blood circulation. The structural basis consists of three parts:

3) Protrusions of astrocytes – so-called pedicles, which anneal on the basal membrane

The main function of BBB is the protection of CNS tissue (especially neurons) against different noxious substances, which would be otherwise able to penetrate to the CNS. The selectivity of BBB prevents many harmful substances from passing into the CNS, but on the other hand allows other (necessary for the brain function) to enter. Generally, hydrophilic substances do not pass BBB until the endothelial cells and astrocytes express appropriate transport channels. The hydrophobic nature of BBB on the other hand allows the penetration of lipophilic substances.

1) Freely, by a passive diffusion, penetrate the BBB:

3) Some of the macromolecules use pinocytosis to pass through BBB

The presence of BBB has some significant clinical implications. Apart form being important protection mechanisms against microorganisms, reducing the risk of CNS infection, BBB also prevents the passage of antibodies and antibiotics, which can seriously impede body’s ability to fight an infection. Beside the above- mentioned antibiotics, there exist a number of other drugs and substances, which are unable to pass the BBB. One of the examples is dopamine, whose insufficiency is characteristic of a Parkinson’s disease. We cannot use dopamine to treat the disease, as it will not get to the basal ganglia (where the shortage occurs). Instead we have to use its precursor L-DOPA, which penetrates BBB and turns into dopamine in the brain tissue.

Encephalopathy caused by an unconjugated hyperbilirubinemia (called kernicterus) may develop in newborns due to underdeveloped blood-brain barrier that does not prevent the bilirubin from entering the brain tissue. It is however very rare in adults with fully developed BBB.

Some regions of the brain do not have the protection of BBB. These are the chemoreceptor zones with an important function of controlling the composition of blood. Examples include:

3) Area postrema: contains chemoreceptors, which are in control of the vomiting

1) Choroidal epithelial cells interconnected by tight junctions (which are more permeable than the junctions between the endothelial cells of brain capillaries) and secreting the cerebrospinal fluid. The side facing the liquor has its surfaced enlarged by the presence of projections called microvilli.

Hemato-liquor barrier restricts the passage of substances from the blood into the liquor. It is more permeable than BBB and many plasma proteins thus enter the cerebrospinal liquid (through pinocytosis or active transport). Their concentrations are lower than those of blood plasma. An impairment of hemato-liquor barrier thus leads to an increase in the concentration of proteins in CSF. The transport occurs in the opposite direction as well and the substances from liquor can enter the circulation.