1. Introduction to the gastrointestinal motility

2. Motility of the stomach

3. Motility of the small intestine

4. Motility of the colon

Introduction to the gastrointestinal motility

The term motility is defined as involuntary mobility of human tubular organs. To ensure the efficient digestion of food is necessary not only the presence of active enzymes, but also a shift and mixing of chyme during passage through the digestive tube. For this purpose, there are two types of movements in the GIT:

This division is artificial, because, in fact, both types of movements use the same mechanisms and often one can convert to the other.

Propulsion movements are movements that provide movement of chyme in the digestive tract. And a rate that is proportional to the rate of absorption and digestion.

Basic propulsion movement is called peristalsis. Its principle is simple: circular muscle layer in a certain place contracts and creates contractile ring, which is further shifted in the aboral direction. Thus it slowly pushes chyme ahead. Distension of the intestine is often an impulse for the formation of the contractile ring – and thus for the initiation of peristalsis. Larger quantity of the chyme causes distention and thereby stimulating the enteric nervous system. This triggers the contraction of the circular muscle segment that is a few inches orally from the place of maximal distension of the tube. Peristalsis is also triggered by certain chemical stimuli or strong parasympathetic activation. It also occurs automatically at certain intervals. In addition to the contraction orally of the distended segment, occurs so called receptive relaxation aborally from the distended segment of the tube. This facilitates the movement of the chyme, as relaxed tube brings less resistance to the moving chyme. This whole process is controlled by Auerbach’s plexus (or myenteric plexus) and is called the peristaltic reflex.

Propulsion movements can be experimentally cause also in oral direction, but they disappear after few millimeters. The peristaltic movements are therefore unidirectional, although the physiological basis for this phenomenon is not yet completely understood.

Mixing movement ensures constant mixing of chyme, so that the entire volume of the nutritionally important components is exposed to enzymes and came into a contact with the lining of the intestine to be absorbed. These movements have different forms and varies throughout the digestive tract.

Segmentation is well understood mixing movement. We can imagine it as repeated contractions of several centimeters distant sections of circular smooth muscle. Contracted regions differ after each segmentation cycle. Thus is the chyme segmented – formation of separated portions of the chyme, which are subsequently again divided and one half is combined with a portion of the previous one and second portions with the following. Number of portions gradually increases and their volume on the other hand decreases, as one half of the two outer portions always has nowhere to attach and forms a new portion.

The motility of the stomach

Stomach is thanks to arrangement of its muscle well equipped to perform three functions:

2) Storage of large amounts of food

3) Emptying into the duodenum

Until chyme is present in the stomach, weak contraction waves (called mixing waves) are formed in its upper third. They appear regularly every 20 seconds and are based on automaticity of the smooth muscle. Once the mixing wave extends from the body of the stomach to the antrum, it becomes more powerful and strongly pushes chyme to the pylorus. However, as the pyloric sphincter is closed, encounters the chyme to the blind endings and only mix, respectively, under the high pressure escapes back against the movement of contractile ring. This phenomenon is called retropulsion.

It is good to note that the pyloric sphincter is never completely closed. Chyme which escape through it, has the volume only a few milliliters, but it has an important function as duodenum can tests its composition and according to that gastric motility is adjusted. This phenomenon, which is additive to the retropulsion mixing, is called pyloric pump.

Gastric emptying has the same mechanism as retropulsion. Simultaneously, it is however accompanied by a decrease in resistance against the passage of chyme through the pylorus – relaxation of the pyloric sphincter occurs. Thus certain volume of chyme can pass into the duodenum – depending on the resistance of the pylorus at a given time. Generally speaking: the higher the sphincter tone is, the higher the resistance against the passage of chyme through pylorus and the smaller volume of chyme enters the duodenum.

The pyloric sphincter is really just a thicker layer of a regular circular muscles. He has about double thickness in the pylorus compared to the rest of the stomach. Normally, its tone is set so that the resistance is small enough for the passage of fluids, but too large for passage of solid chyme. It must go through several retropulsion mixing and be sufficiently mixed with the gastric juices to continue into the duodenum.

Gastric emptying is controlled by several factors that can be divided into two groups:

Gastric factors generally potentiate gastric emptying by increasing the frequency of the mixing waves or by reducing the pyloric tone. They are activated if there is a larger amount of food in the stomach (and especially food rich in proteins, e.g. meat). Contact of peptides with antrum mucosa causes secretion of gastrointestinal hormone gastrin.

Gastrin has the following effects:

1) Increases the production of gastric juice that has low pH

Note that if there is a sudden increase of the frequency of mixing waves and a decrease of pyloric sphincter tone, increased efficiency of the pyloric pump occurs. This is the main mechanism of increased gastric emptying.

These are mostly inhibitory signals that block gastric emptying. There are two main groups:

2) Feedback control through the gastrointestinal hormones

If large volume of chyme passes through the pyloric sphincter into the duodenum, there is a distension of its wall leading to a reflex that slows down or completely stops gastric emptying. This signal is mediated:

1) Directly by the enterogastric system

2) Through the paravertebral sympathetic ganglion

3) Through the vagus nerve to the brainstem and back

All of them are called pyloric reflexes. Their effect is dual:

2) Increased tone of the pyloric sphincter

This slows down the mechanism of the pyloric pump.

In addition to the volume of the chyme, the pyloric reflexes are activated by the low pH (3.5-4), high concentration of peptides in the chyme and its hypertonicity or hypotonicity.

Feedback control through the gastrointestinal hormones

This hormone has three important effects. It reduces the activity of the pyloric pump, blocks the effect of gastrin on gastric motility and increases the secretion of bile into the chyme, as it activates contractions of the gallbladder.

Secretin is produced by duodenal cells as a response to the low pH of the chyme. It inhibits gastric emptying.

GIP is produced as a response to the high lipid content in the chyme. Although it has an inhibitory effects on the gastric motility and especially on the the pyloric pump it is the weakest one of all three hormones.

Motility of the small intestine

Contractions of the muscle layers of the small intestine can be divided into two groups:

Process of the segmentation has already been discussed above. We only briefly discuss its causes here. Segmentation is a manifestation of electrical slow-waves, which represent action potentials generated by the automaticity of smooth muscle. Maximal frequency of these slow waves is 12/min. Therefore, segmentation can also occur up to 12 times per minute, but only in very rare cases. The normal frequency of segmentation movement is about 3 per minute.

Their mechanism has already been described in the introduction part. The contractile ring in the small intestine has a velocity of about 0.5-2 cm/min. Faster in the proximal segments, in distal segments it slows down. One contractile ring travels a maximal distance of 10 cm, then it goes out and chymus wait for the new one. Therefore, the overall speed of passage of chyme is 1 cm/min.

Control of the motility of the small intestine

There is an increase of propulsion movements in the small intestine after each meal. This is due to both the presence of chyme in the small intestine and the gastroenteric reflex. This reflex is a response to the stretching of the stomach wall and it raises the motility of the bowel. Components of this reflex lies completely in the myenteric plexus. Furthermore, hormones act – CCK, gastrin, insulin, motilin. They are secreted postprandially and increase the frequency of propulsion and mixing movements. Conversely, secretin and glucagon inhibit the motility of the small intestine.

Function of this valve is to prevent reflux of chyme from colon into the small intestine. In fact, it is not a valve, but the orifice of the terminal ileum, which protrudes into cecum. But due to the amount of muscle it works as a valve. Its function depends on its resistance. About 1500-2000 ml/day of chyme passes through.

Motility of the colon

Colon has two main functions: to absorb electrolytes and water and to store solid wastes before they are eliminated from the body. Both of these functions require no extensive motor activity. Therefore, the longitudinal muscle layer is in the colon reduced to the taenia. They represent three bands of muscle that stretch along the entire length of the colon. Its motility is thus slower than that of the small intestine. 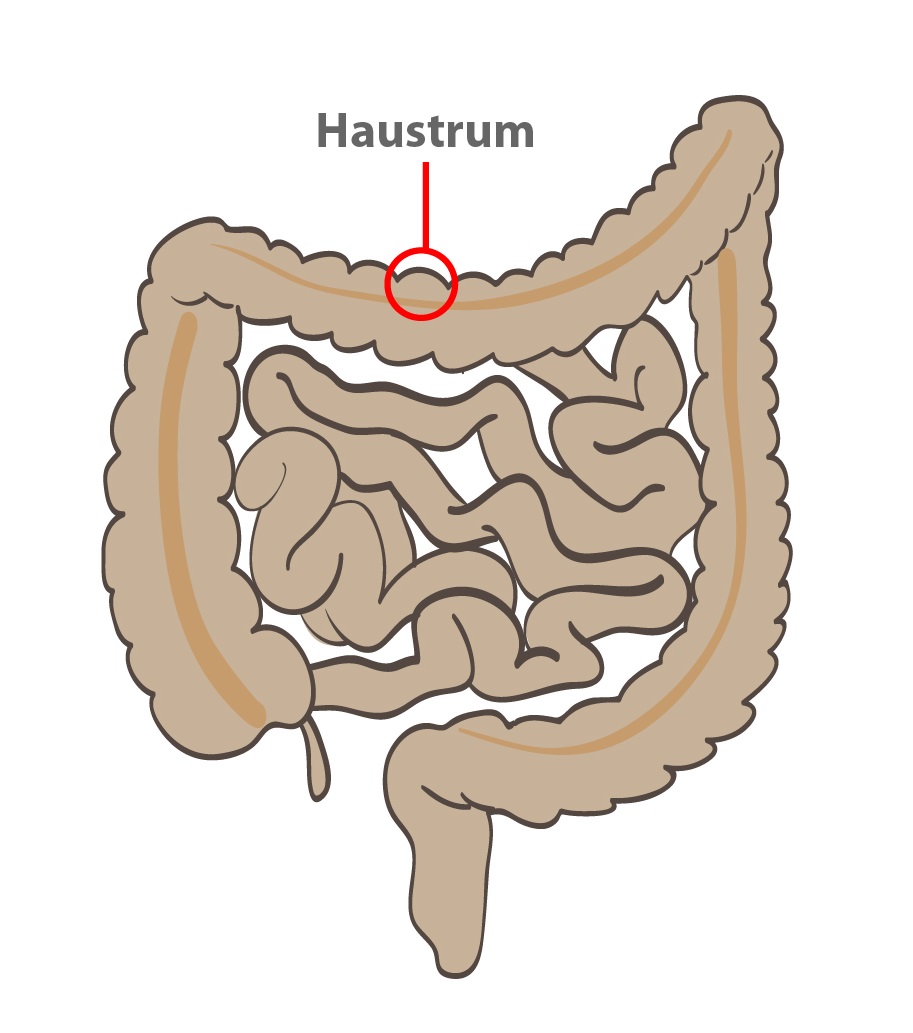 It is a mixing movement of the colon (a modified segmentation movement). First, there is a circular muscle contraction. Subsequently taeniae contract forming the haustrum. Haustra form the characteristic appearance of the colon, which is composed of a series of relatively large bulges. During the contractions of taenia, there is an increased pressure inside haustra. After about 30 seconds the pressure reaches its maximum and in next 60 seconds the haustrum disappears. Formation of a new haustrum starts after several minutes at a new place (segmentation movement), and the whole process is repeated.

Propulsion movement is mostly determined by the haustration which progressively and slowly progresses from the cecum to the sigmoid colon. Passage of digested material through the colon by haustration held for about 12 hours and the liquid chyme becomes solid fecal matter.

However, there is a faster propulsion movement of the colon, that occurs three times a day for about an hour after a meal and lasts only for 15 minutes. It reminds peristalsis. There is a contraction ring, which gradually moves in aboral direction. It arises in the transverse colon and normal haustration activity disappears for about 15 minutes.

All described colon movements grow in intensity and frequency when two reflexes are triggered:

Gastrocolic reflex is triggered by a high tension in the stomach wall. Myenteric plexus transports this signal through to the colon that increases the frequency of haustra formation.

Duodenocolic reflex is triggered by a high tension in the duodenal wall. Signal spreads through the myenteric plexus to the colon and increases the frequency of action potentials in the smooth muscle cells. That increases speed of the propulsion movements.