3. The role of organs in the energy metabolism

Metabolism (from Greek metabolē – a change) is a set of all chemical reactions taking place in organism. They involve a transformation of nutrients, in most cases catalysed and regulated.

Metabolic reactions are often coupled together to form metabolic pathways, where one substance is transformed, through a series of reactions, into another one. This process produces various intermediates, which can act as an initial substrate for other metabolic pathways.

For example pyruvate can be converted to lactate, or it can form an amino acid alanine, participate in the formation of glucose in the process of gluconeogenesis or be converted to acetyl-CoA and act as an energy source.

We call this interconversion of nutrients with various intermediate products an intermediary (or intermediate) metabolism.

Metabolic reactions in general can be divided into anabolic and catabolic.

Anabolic reactions are synthetic; they construct more complex substances from simpler ones. They require energy that is consumed in the course of the reaction – that is why, they belong to group of endergonic reactions.

Catabolic reactions involve cleavage, degradation or decomposition of complex substances into simpler ones. The energy is released during this process and can be used to form macroergic molecules.

Among the most important catabolic reactions occurring in our body are glycolysis, glycogenolysis, lipolysis, beta-oxidation, degradation of ketone bodies, proteins or amino acids.

Some metabolic pathways have a character of both, anabolic and catabolic reactions, and are termed amphibolic (gr. amfi- both).

A good example is a citric acid cycle, which completes the oxidation of a carbon skeleton of all nutrients (catabolic pathway), but its intermediates serve as substrates for anabolic pathways (alpha-ketoglutarate is converted to glutamate; succinyl-CoA to hem or citrate is used in fatty acid synthesis).

A group of reactions that serve to supplement the intermediate products to other metabolic pathways is called anaplerotic reactions (gr. aná – upwards and plerotikos – to fill). These reactions, for example, supplement the citric acid cycle, mainly with oxalacetate (using glucose, lactate or glucogenic amino acids) and alpha-ketoglutarate (from glutamate).

A continuous regeneration of macroergic compounds, serving as a source of free energy for endergonic reactions, is vital to sustain life. Their production begins with catabolism of high-molecular substances. The fragments created by this process are converted to basic intermediates (like acetyl-CoA), which are further (in case of aerobic metabolism) oxidised in citric acid cycle and the resulting coenzymes (NADH + H+ a FADH2) are used in electron transport chain to produce ATP.

ATP is the most important and universal macroergic compound. It partially serves as an energy store, but mainly it provides the transfer of free energy (G) in cells. Despite the fact, that there exist macroergic compounds able to release a greater amount of energy than ATP, they are not so widely used. Reasons are a relative stability of the anhydride bond, which is resistant to spontaneous hydrolysis (unlike other anhydrides) and undergo splitting only in the presence of enzymes.

Substances with more negative values of G (e.g. phosphoenolpyruvate, phosphocreatine, 1,3- bisphosphoglycerate,…) can be used in the process of ATP regeneration.

There are two ways of synthesis of ATP in animal cells:

It is a process of energy coupling of an exergonic reaction with ATP synthesis from ADP and Pi (an inorganic phosphate). The most common are three reactions: two occur during a glycolysis (the conversion of phosphoenolpyruvate to pyruvate and 1,3-bisphosphoglycerate to 3-phosphoglycerate) and one is a part of citric acid cycle (the conversion of succinyl-CoA to succinate).

To learn about this type of ATP synthesis in detail, see Subchapter 2/7.

The release of energy from ATP (ATP hydrolysis) takes place in several steps.

ADP still contains one macroergic bond that can serve as a source of energy. However, use of ADP instead of ATP brings problems due to the substrate specificity of enzymes. That is why most of the ADP undergoes a conversion reaction catalysed by adenylate kinase: 2 ADP → ATP + AMP and cell uses the resulting ATP.

It is possible to split the PPi with enzyme diphosphatase (also called pyrophosphatase) and further release the energy.

Other nucleoside triphosphates are less universal than ATP and in general are used for specific purposes. UTP, for example, enables the activation of saccharides and so enables them to enter the metabolic pathways.

Enol phosphates contain OH- group bound through an ester bond to the phosphate group. The most important representative is phosphoenolpyruvate (PEP), a macroergic compound with the highest ΔG potential (up to -61.9 kJ of released energy per mol). The exothermic extent of this conversion explains, why the reaction PEP and pyruvate, occurring in glycolysis, is irreversible.

Acyl phosphates have an anhydride bond between COOH- and a phosphate group. They include carbamoyl phosphate (used in urea synthesis) or 1,3-bisphosphoglycerate (an intermediate of glycolysis).

We can sometimes encounter a term low-energy phosphates. According to classical definition, a macroergic substance is a substance able to release at least 25 kJ of energy per mol. Low-energy phosphate (like glucose-6-phosphate), release less energy, somewhat between 9 and 20 kJ/mol.

The main intermediates of energy metabolism

Cellular metabolism has some common metabolic pathways that act as an intersection in the conversion of nutrients. The most important are pyruvate dehydrogenase reaction (PDH), Krebs cycle (KC) and respiratory chain (RC). Three intermediates: acetyl-CoA, pyruvate and NADH have a prominent position in the energy metabolism.

a) PHD (pyruvate dehydrogenase reaction) – the irreversibility of this reaction is the reason why fatty acids, in most cases, can not be converted to glucose

b) Amino acids degradation – only lysine and leucine degrade directly to acetyl-CoA, other amino acids are converted to it through pyruvate

c) Beta-oxidation of fatty acids and degradation of ketone bodies

a) Respiratory chain and ATP synthesis

b) Conversion of pyruvate to lactate 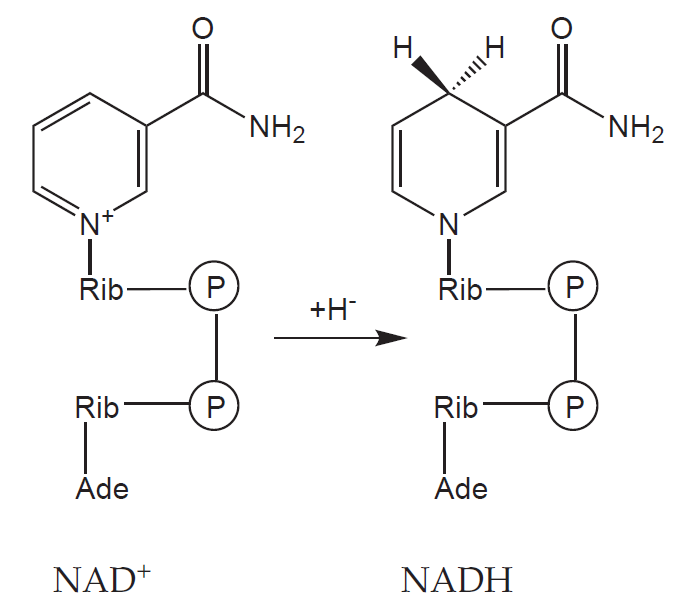 The role of organs in the energy metabolism

1) Liver and the metabolism of saccharides

Liver plays an important role in short-term (within hours) and long-term (in the range of days to weeks) glycemic regulation (so-called glucostatic function of liver). When the level of glucose in vena portae rises after the meal, liver starts the process of glycogen synthesis, which uses the glucose from the blood. The opposite process takes place during fasting, when the blood glucose level drops. The glucose is added to the bloodstream through the glycogenolysis (the breakdown of the stored glycogen) or gluconeogenesis (when the glycogen stores are depleted). The degradation of fructose and galactose also takes place in liver.

2) Liver and the metabolism of lipids

Some pathways of lipid metabolism are unique to the liver (like ketone bodies synthesis), but most take place in other tissues as well (though liver is often quantitatively the most important organ).  Oxidation of fatty acids takes place here and speeds up during fasting to the point where more energy is produced than the liver needs. From the excessive acetyl-CoA the ketone bodies are synthesised. Liver cannot utilities the ketone bodies and releases them into the bloodstream, where they serve as an alternative energy source.

Liver also plays a crucial role in the metabolism of lipoproteins. It synthesises VLDL particles, some HDL, convert IDL to lDL and degrades chylomicron remnants, HDL and portion of LDL. The synthesis of cholesterol takes place here as well.

3) Liver and the metabolism of proteins and amino acids

Some reactions of protein and amino acid metabolism take place only in liver (urea synthesis), while others can be performed by other tissues as well (amino acids deaminations and transaminations, synthesis of nonessential AA, …).

Liver synthesises, with the exception of immunoglobulines, all plasmatic proteins (e.g. albumin or coagulation factors).

The processes of concentrating the urine and the transport of substances that happen in kidneys require large amounts of energy. That is why the ATP consumption, especially in the renal cortex, is high. ATP is produced by oxidative metabolism of glucose, lactate, fatty acids and amino acids.

Kidneys are, after the liver, the second most important site of gluconeogenesis (mainly during fasting). Its main substrate is the carbon skeleton of amino acids (especially glutamine). Ammonia, a product of these reactions, is secreted directly into the urine, where it acts as a buffer.

Skeletal muscle plays an important role in the metabolism of amino acids – primarily branched amino acids (valine, leucine, isoleucine). The carbon skeletons obtained in this process are used to synthesise energy and the amino groups serve as a substrate for synthesis of alanine, glutamine and glutamate. These amino acids are subsequently released in relatively large quantities into the bloodstream. Liver can use the alanine produced by skeletal muscles in glucose regeneration (the alanine cycle). 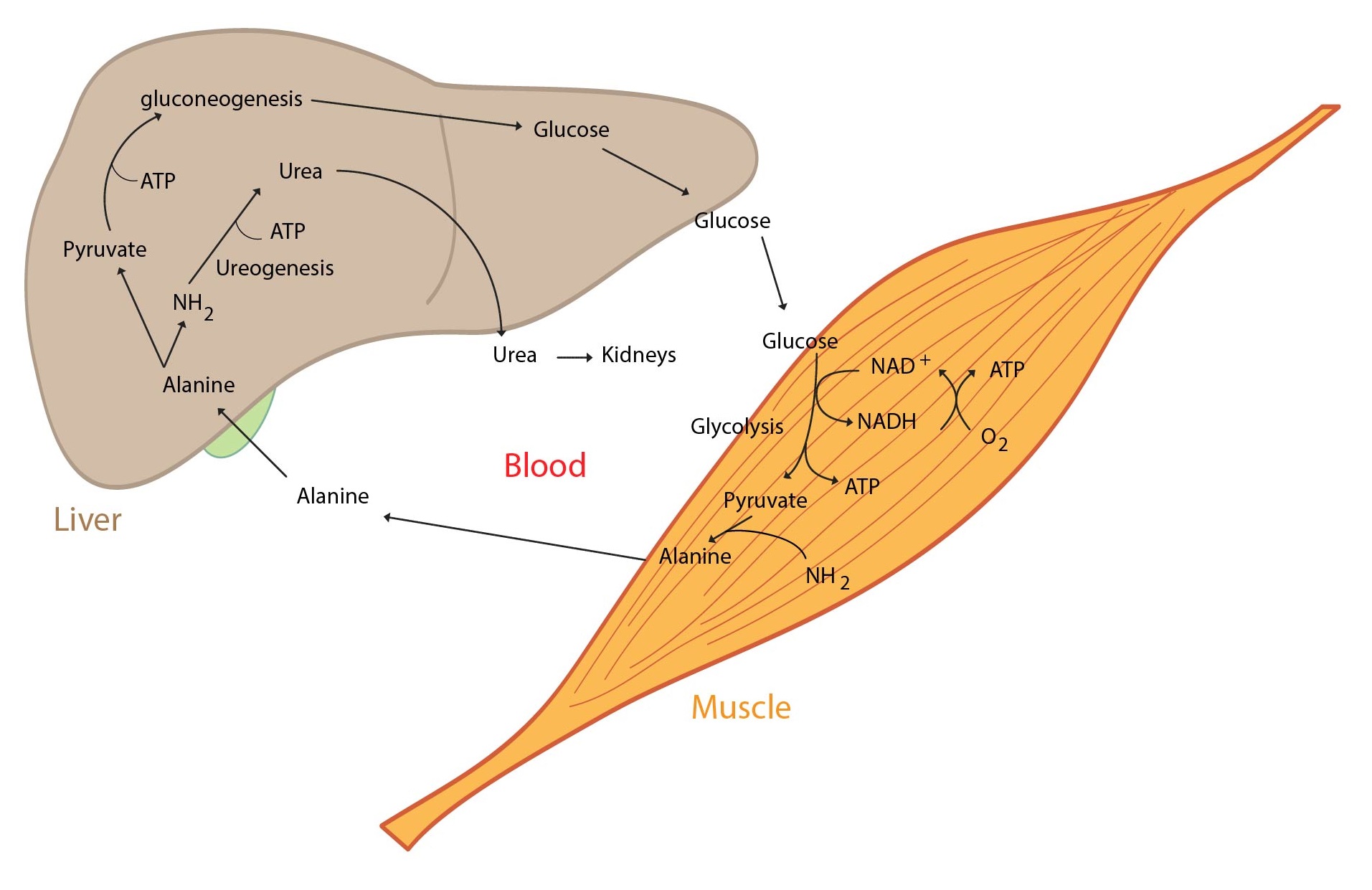 Postprandially (after eating, when insulin has a predominant effect), the adipose tissue serves as the storage place for TAG. It stores lipids obtained from food and those synthesised in liver as well. During periods of fasting (due to  the effect of glucagon) lipolysis takes place – the breakdown of lipid to fatty acids and glycerol.

Glucose is the main energy substrate for the brain. The daily consumption is around 120 g, but during adapted fasting (which occurs approximately after 3 weeks without an adequate supply of energy), the brain can cover up to the 50 % of its energy need from the oxidation of ketone bodies.

Following figure shows the interaction of our organs during physical activity: 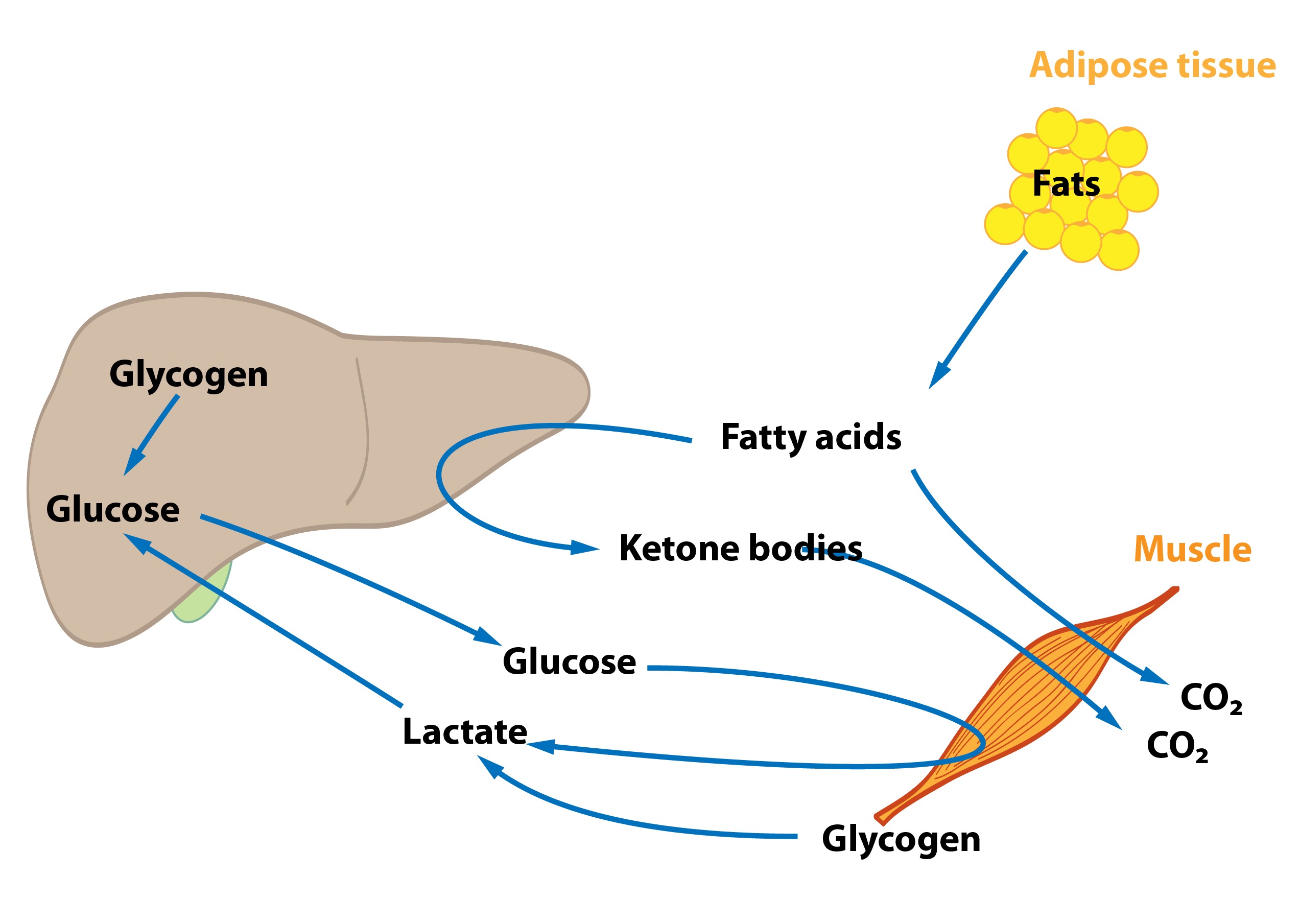