1. Introduction to degradation of lipids and ketone bodies metabolism

2. Lipids as source of energy – degradation of TAG in cells, β-oxidation of fatty acids

3. Synthesis and utilisation of ketone bodies

Introduction to degradation of lipids and ketone bodies metabolism

Triacylglycerol (TAG) contain huge amounts of chemical energy. It is very profitable to store energy in TAG because 1 g of water-free TAG stores 5 times more energy than 1 g of hydrated glycogen. Complete oxidation of 1 g of TAG yields 38 kJ, 1g of saccharides or proteins only 17 kJ. Man that weighs 70 kg has 400 000 kJ in his TAG (that weight approximately 10,5 kg). This reserve of energy makes us able to survive starving in weeks. TAG accumulate predominantly in adipocyte cytoplasm.

There are more types of fatty acid oxidation. Individual types can be distinguished by different Greek letters. Greek letter denote atom in the fatty acid chain where reactions take place. β-oxidation is of major importance, it is localised in mitochondrial matrix. ω- and α- oxidation are localised in endoplasmic reticulum.

Animal cells cannot convert fatty acids to glucose. Gluconeogenesis requires besides other things (1) energy, (2) carbon residues. Fatty acids are rich source of energy but they are not source of carbon residues (there is however one important exception, i.e. odd-numbered fatty acids). This is because cells are not able to convert AcCoA to neither pyruvate, nor OAA. Both carbons are split away as CO2. PDH is irreversible. Plant cells are capable of conversion of AcCoA to OAA in glyoxylate cycle.

Lipids as source of energy – degradation of TAG in cells, β-oxidation of fatty acids

Lipids are used for energy production, this process take place in 3 phases:

2)  FA is activated in cytosol and then transported to the mitochondrial matrix.

3)  β-oxidation: FA is decomposed to AcCoA. AcCoA then enters (1) the TCA cycle, or (2) ketone bodies synthesis.

Free fatty acids bind to serum albumin, which transports them in blood (e.g. to the liver). Glycerol is transported in plasma, freely soluble.

Hydrolysis of TAG provides glycerol. Glycerol can be converted to intermediates of glycolysis/gluconeogenesis. First step is phosphorylation producing glycerol-3-P catalysed by glycerol kinase. Then dehydrogenation take place yielding dihydroxyacetone phosphate, this step is catalysed by the enzyme glyceraldehyde-3-phosphate dehydrogenase. You should know that DHAP is an intermediate of glycolysis/gluconeogenesis.

Entry of fatty acid to the cells

Fatty acid activation in fact has two phases. At first acyl-adenylate (acyl-AMP) is produced, secondly AMP is changed for coenzyme A.

Entry of fatty acid to the mitochondrial matrix

Manner of entry of fatty acids to mitochondrial matrix depends (again) on length of their chain:

Acyl-CoA with C12-C18 are able to pass outer mitochondrial membrane, inner membrane is however impermeable therefore fatty acid must split up with CoA and bind to carnitine. This reaction, i.e. transfer of fatty acid from acyl-CoA to acyl-carnitine, is catalysed by the enzyme carnitine acyltransferase I (CAT I = carnitine palmitoyltransferase I = CPT I). This enzyme is localised on cytosolic side of outer mitochondrial membrane. 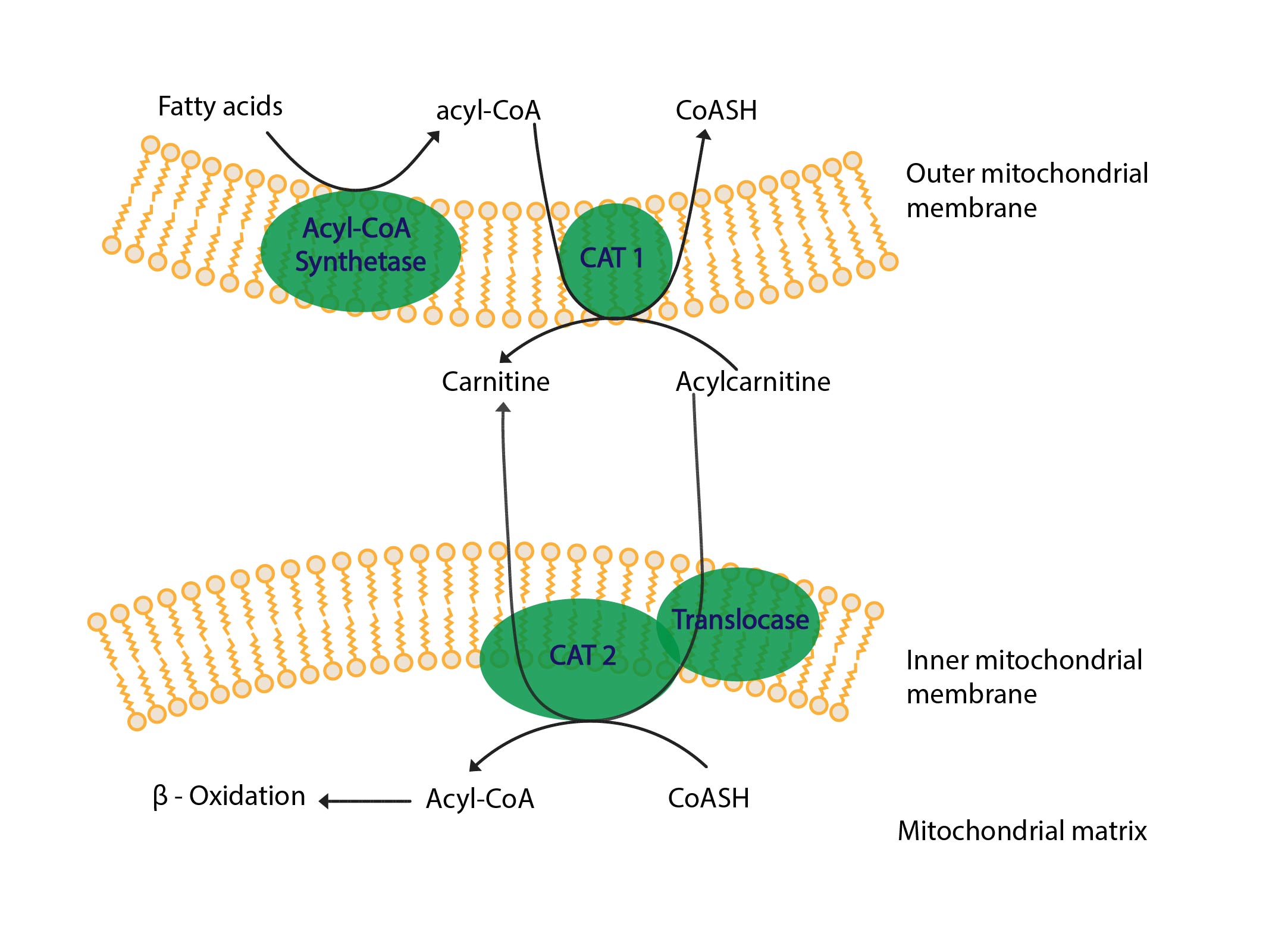 β-oxidation is closely connected with the ETC, thus it is obvious that β-oxidation take place only in aerobic conditions. Single steps of the β-oxidation are catalysed by 4 enzymes:

1) Oxidation of succinate to fumarate catalysed by the enzyme succinate dehydrogenase – cofactor is FAD.

3) Malate oxidised to oxaloacetate, catalysed by the enzyme malate dehydrogenase – cofactor is NAD+.

This enzyme catalyses hydration of trans-double bond made in first step. Hydroxyl group is produced in L-3-hydroxyacyl-CoA.

This enzyme catalyses thiolytic splitting. This is the last step of β-oxidation turnover. In this reaction β-keto carbon is attacked by SH-group of co-enzyme A. Co-enzyme A is thus attached to β-keto carbon and (1) 2-carbons shorter acyl-CoA and (2) AcCoA are produced.

One turnover of the β-oxidation

β-oxidation is cyclic process. One turnover could be described like this:

An intermediate (acyl-CoA 2-carbons shorter) enters next turnover of the β-oxidation. Majority of fatty acids have even numbered carbon chain, thus in the last turnover butyryl-CoA is converted to two molecules of AcCoA.

As admitted in Subchapter 2/7 we are not able to determine precise amounts of ATP produced in the ETC. Following values are only approximate and we show them just make you able to compare energy balance of glucose oxidation with fatty acid oxidation. In the ETC one NADH provides 2,5 (3) ATP and one FADH2 provides 1,5 (2) ATP. In summary:

Regulation of β-oxidation of fatty acids

Majority of unsaturated fatty acids contain cis-configuration of double bonds. These fatty acids are degraded in the β-oxidation. Only difference is that enoyl-CoA-hydratase requires trans-isomers, thus cis-isomers must be converted to trans–isomers by the enzyme isomerase.

1) FADH2 from first step is not reoxidised in the ETC but in reaction with O2:

Oxidation terminates when octanoyl-CoA is produced. Octanoyl-CoA is transported bound to carnitine to β-oxidation. Reactions described above do not lead to ATP production.

These pathways are of minor importance. In ω-oxidation reactions take place on the last carbon. In α-oxidation oxidation takes place on α-carbon.

Production and utilization of ketone bodies

Production and function of ketone bodies

Enter of AcCoA to the TCA cycle depends on availability of oxaloacetate. Oxaloacetate is produced by pyruvate carboxylation. In starving or in diabetes mellitus OAA is utilised in gluconeogenesis. Lack of saccharides leads to decreased OAA and thus the TCA is decelerated.

Course of ketone bodies synthesis is as follows:

4) Reversible interconversion of acetoacetate and β-hydroxybutyrate

β-ketothiolase catalyses the last step of β-oxidation of fatty acids – thiolytic cleavage. In ketone bodies synthesis the reaction takes place in reverse course and thus two molecules of AcCoA is converted to acetoacetyl-CoA. This step is localised in mitochondrial matrix.

This enzyme catalyses cleavage of HMG-CoA to acetoacetate and AcCoA. In this step first ketone body (i.e. acetoacetate (AcAc)) is produced

Some of acetoacetate molecules are spontaneously (non-enzymatically) decarboxylated to acetone. The body is unable to use acetone at all, thus it is eliminated by breathing and in the urine.

Activation and utilization of ketone bodies

Ketone bodies are polar, i.e. they are transported freely in plasma. Ketone bodies are utilized only outside the liver, since hepatocytes do not contain enzyme required for ketone bodies activation. At first oxidation of β-hydroxybutyrate to acetoacetate. Acetoacetate is activated by transfer of coenzyme A from succinyl-CoA, thus acetoacetyl-CoA is produced. Acetoacetyl-CoA is converted to AcCoA (this is part of β-oxidation, catalysed by the enzyme thiolase). AcCoA enters the TCA cycle.

2) Carnitine acyltransferase I – entry of fatty acids to the mitochondrial matrix, where β-oxidation is performed

High ketone bodies level in the blood indicates presence of great amounts of AcCoA. Its consequence is lipolysis inhibition.

Maximal velocity of ketone bodies production is achieved when plasma concentration is ~ 12 mmol/l.

Relative excess in counterregulatory hormones and deficiency in insulin are pathophysiologic base of DKA. This leads to excessive lipolysis in the adipose tissue, that leads to increase in plasma fatty acid concentration. In hepatocytes malonyl-CoA concentration decreases, this stops inhibition of transport of acyl-CoA to mitochondrial matrix and thus β-oxidation is launched. HMG-CoA synthase is activated and the ETC is saturated by reduced cofactors from β-oxidation, hence the TCA cycle is decelerated. Simultaneously production and utilization of ketone bodies increases. Ketone bodies are present in the urine – ketonuria. Utilization of ketone bodies is maximal when concentration is approximately 12 mmol/l. Their accumulation takes place and acidemia deepens. In the breath is sweetish odour of acetone.